Lintang Bedol to remain in jail 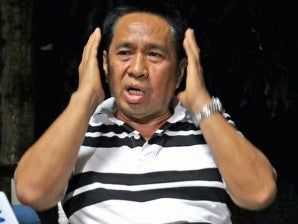 Former Maguindanao election supervisor Lintang Bedol will remain in detention at the Philippine National Police custodial center in Camp Crame, Quezon City, even though he finished serving his sentence in a separate case last week.

Bedol completed on Jan. 19 a six-month sentence for indirect contempt that the Comelec en banc had found him guilty of back in 2007 for his failure to heed  summons to testify in an inquiry into poll fraud in Maguindanao that year.

He only served his sentence beginning last year after he finally came out of hiding.

In November last year, the Comelec en banc voted to file an electoral sabotage case against the four and others for allegedly conspiring to ensure a “12-0” victory for the Arroyo administration’s “Team Unity” senatorial ticket in the 2007 polls.

Arroyo, Abalos and Ampatuan, one of the accused in the 2009 Maguindanao massacre, are all under detention in various other locations—Arroyo at Veterans Memorial Medical Center in Quezon City, Abalos at Southern Police District headquarters in Taguig City and Ampatuan at Camp Bagong Diwa also in Taguig. Nathaniel R. Melican