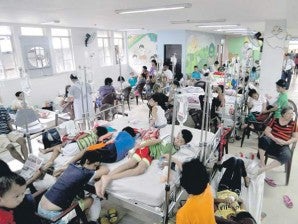 SICK AND POOR Poor patients who do not enjoy the benefits of health insurance flock to the pediatric ward of Quirino Memorial Medical Center in Quezon City to seek treatment for various ailments. RICHARD REYES

Joy Araneta, a house help in a Las Piñas residence, recently lost her daughter Roslyn to ovarian cancer by default.

She didn’t have the money to save her child.

The mother of five children from the impoverished town of San Andres in Quezon province said she was told she could have gotten help from the Philippine Health Insurance Corp. or PhilHealth.

The state agency attached to the Department of Health (DOH) was created in 1995 to provide affordable medical insurance to people like Araneta in time of need.

But Joy is not a member of the program designed to generate funds from those who can afford health care to those who cannot.

With her earnings of P3,000 a month, the woman said that her family back home in San Andres could hardly afford three square meals a day, especially at a time when Roslyn was battling the big C.

“Sometimes, we have no other choice but to eat rice with salt diluted in water,” said Joy, whose husband only earns when he harvests corn from the small piece of land in San Andres he cultivates.

But because she earns a little more than the poverty threshold of $2 a day, roughly P2,500 a month, she’s not qualified to become a nonpaying member of PhilHealth whose monthly premiums are shouldered by the municipality and the national government at a 25-75 percent sharing.

PhilHealth provides assistance to 5.2 million households classified as the poorest of the poor under the health department’s Kalusugan Pangkalahatan, or Universal Health Care (UHC). This is about giving Filipinos the financial protection they need so that when they get sick, they could cope and survive no matter how poor they may be. This means access to needed medical care regardless of capability to pay.

As part of the UHC goal, PhilHealth ensures that the poorest of the poor are sponsored and thus are entitled to premium benefits.

These are the same households who receive assistance under the government’s conditional cash transfers program, which this year has an allocation of P48.4 billion—more than double last year’s budget. Under this program, a family receives a maximum of P1,500 for maternal health care and education of malnourished children.

Joy Araneta, however, is a victim of statistics. She is not that poor, according to the Department of Social Welfare and Development (DSWD). The agency’s poverty threshold in Quezon is P16,125 a year, or P1,343.75 a month.

Having a daughter with cancer doesn’t make Joy and her family any luckier than 3,743 others listed as poor in San Andres.

In 2010, Roslyn Araneta, a 19-year-old food server in an eatery in Cavite, noticed a growing lump in her lower abdomen. When she started losing weight and having on-and-off fever, Joy decided to take her to a doctor.

“I brought her to a hospital in Parañaque. The doctor said that there was a tumor in one of her ovaries that had to be removed,” the mother said.

Without health insurance and with a measly income, she didn’t know what to do to get the money needed for the operation, which would cost P70,000-P100,000.

She sought help from friends and asked if they knew any cheaper form of treatment.

Joy resorted to a faith healer. “We paid P2,000 for faith healing in a chapel. I thought the process was successful because Rolsyn started feeling better,” she said.

Roslyn quit her job and went home to Quezon. Joy went back to work in Parañaque. “I just kept on praying that nothing of the tumor was left. I really thought nothing worse would happen.”

After about a year, Roslyn started to feel weak again. Her condition deteriorated. She had an ultrasound in Quezon but had to go back to Manila to have the results interpreted and to seek further treatment.

Joy brought her to East Avenue Medical Center, where she had to pay P250 per consultation. Doctors said Roslyn had to undergo another ultrasound and other tests.

“There seemed to be no end to tests and consultations. We kept on returning to clinics and hospitals to get tests done and to seek other opinions,” Joy said.

Results revealed that Roslyn’s tumor was already at Stage 4 of ovarian cancer. A doctor told Joy about her daughter’s condition, but she refused to talk about it with Roslyn.

Joy said she knew she couldn’t afford any of the necessary treatments so she didn’t bother to ask how much they had to spend.

They went to the government-run Philippine General Hospital (PGH), hoping Roslyn could be treated  at a cost they could afford. To their surprise, the tertiary hospital, which is mandated to serve the helpless, was “fully booked.”

“After a PGH doctor had seen Roslyn’s test results, she told us that the hospital had too many patients and they could not accommodate us anymore,” Joy lamented.

No other way but die

The daughter, who was then getting weaker, grew despondent.

“She told me that she was already tired of going to doctors and hospitals. She said that she just wanted to go home and with her father and the rest of the family,” Joy said. “It’s fate. If you don’t have the money, there’s no other way but to die.”

After Roslyn’s death, Joy said she would try getting a PhilHealth membership.

“If I can set aside P100 a month, I would really try to have PhilHealth for me and my family. So if any of us gets sick, I can expect some assistance,” she said.

Many are counting on PhilHealth’s role to provide social health insurance that works and can be felt especially in life-and-death situations.

One of the recent developments in PhilHealth’s insurance system is the shift from a fee-for-service scheme to a case-rate payment system.

Since September, instead of paying for every service provided up to a certain benefit ceiling, PhilHealth has been reimbursing its members at fixed rates for 23 medical and surgical cases.

Despite objections, Dr. Eduardo Banzon, PhilHealth president, said that this payment scheme was the only way to go.

“The case rate payment scheme allows us the flexibility to negotiate with hospitals. It is an agreement that they won’t charge anything above the (fixed rates),” he said. “Whether the amount is right or not, that’s another issue.”

“The amounts that have been put in the case rate have been studied but there will never be a rate that everybody is going to be happy with,” he added. “These are realities we have to face.”

The rates are too low to treat a patient with the highest quality of health care, said Dr. Rustico Jimenez, president of the Private Hospitals Association of the Philippines.

“For instance, the rate for stroke is just P28,000. That is not even enough for a stroke patient’s need for a day,” he said.

(To be continued Tuesday)