Last-ditch effort to save ancient tree in Agusan del Sur 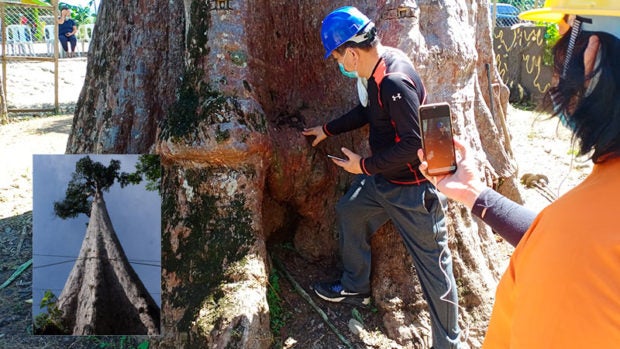 ENDANGERED LANDMARK This 300-year-old rosewood tree (inset), locally known as “toog,” in San Francisco town, Agusan del Sur province, has been marked for cutting by the Department of Public Works and Highways but intervention from groups like Society of Filipino Foresters Inc. prompted Mayor Solomon Rufila to hold it in abeyance. —CHRIS V. PANGANIBAN

SAN FRANCISCO, Agusan del Sur, Philippines — The local government has put on hold the cutting of an iconic 300-year-old Philippine Rosewood (Petersianthus quadrialatus), locally known as “toog,” as tree experts and foresters’ groups made one last-ditch effort to save the species.

Tommy Valdez, national council president of Society of Filipino Foresters Inc. (SFFI), wrote Mayor Solomon Rufila on Aug. 12, appealing to hold in abeyance the scheduled cutting of the tree while the group is seeking help of tree expert Dr. Armando Palijon to save the ailing natural landmark along the Surigao del Sur-Agusan del Sur highway.

“The SFFI is willing to contribute to the cause of Dr. Palijon [in] the belief that sustainable forest management starts with a single tree,” said Valdez, representing the 12,000-member group of registered professional foresters in the country.

Earlier, a resolution of the municipal council approved the cutting of the upper part of the tree after villagers raised fear that the tree, whose trunk had been infected with fungi and termites, might fall down and put at risk the lives of residents and passing motorists.

Palijon warned that cutting the crown might eventually kill the tree. Unable to visit the site because of the new coronavirus disease (COVID-19) pandemic, he and Marcelina Pacho, a former pathologist of the Department of Environment and Natural Resources’ DENR Ecosystems Research and Development Bureau (ERDB), joined a Zoom meeting on Aug. 21, and instructed foresters at the site on how to assess the tree’s condition.

The experts would soon release their findings and recommendations, a copy of which would be sent to the Agusan del Sur Environment Council for Sustainable Development, the DENR and the local governments of San Francisco and Agusan del Sur.

According to Jose Kanapi, vice president of SFFI Davao Region Council, the 5,000-meter toog could be sighted 10 kilometers away and has served as an important tree landmark to foresters since the early 1960s, even before it caught the attention of local officials and conservationists in the mid-1980s.

Kanapi, who once worked with Paper Industries Corp. of the Philippines in Bislig City, said the tree along the Bureau of Forestry-Forest Reserve line marked the boundaries of the firm’s timber license agreement.

He expressed dismay over the decision to cut down the tree. He vowed to step down from his post and burn his license live on video if the cutting would push through.

“I posted on SFFI’s [social media] page a challenge to speak out,” he said. “Silence from SFFI means go ahead cut the toog tree,” said Kanapi, adding that 89 percent of SFFI members had been foresters working with the DENR ERDB and local government units.

Another call came from singer-composer and environmentalist Bayang Barrios–Villegas, who grew up in nearby Bunawan town. On social media, she asked netizens to make noise to save the tree and share her message until it reached the proper authorities.

“I hope they will [save] it,” the Manobo singer posted. She said she had never heard a toog tree fall.