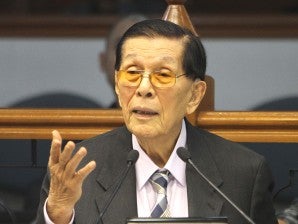 Senators sitting as judges in the impeachment trial of Chief Justice Renato Corona were advised on Sunday to think twice about the questions they would ask lest they be perceived to be taking sides.

Senate President Juan Ponce Enrile gave the advice after receiving complaints that some senators were siding either with the prosecutors from the House of Representatives or the defense team of Corona.

Former Senator Francisco Tatad earlier told Senator Franklin Drilon that he seemed to be lawyering for the prosecution panel, a comment that irked the senator.

In a radio interview, Enrile said he was just the presiding officer in the trial and thus, could not take action should some senators appear to be siding with any of the panels.

He said senators were aware that they were “not supposed to be partisan” but “neutral” because they were sitting as judges in the impeachment court. He likened the role of senators to that of a “referee” in a boxing or basketball game, who would make the final call.

“When we took our oath as judges in the trial, it was there in the rules that we must act with utmost impartiality,” the Senate President said.

As judges, senators can ask questions that need clarification during the trial, Enrile said.

“They should think hard about the question they want to raise to avoid the impression that they are either for the prosecution or defense,” Enrile said.

Told that some quarters had accused some senators of helping the prosecution panel, Enrile said this could just be an “impression.”

The Senate President said he did not think this was the intention of one senator.

Enrile disagreed with Senator Panfilo Lacson’s claim that the proceedings were being bogged down by the defense lawyers of Corona.

He said it was “normal” and “natural” for these lawyers to raise objections during the presentation of evidence by the prosecution panel, adding that in any trial, the two panels always clash.

“It may seem technical for those who do not understand trials but (raising objections) are tools or vehicles to know who is telling the truth,” Enrile  said.

He said the rules would have to be amended, a development which would mean more delays if senators wanted changes in the pace of the proceedings.

Still, Enrile said the Senate “cannot control” the pace of the proceedings, stressing that this was all up to the lawyers.

“My God, you are dealing with the interest of a fellow human being. You are going to dishonor him. You are going to take his high position in government …  This is not like buying meat in the market,” he also said.

He said that “if the one presenting the evidence is skillful, it will take a month” to do the job. “And then, the defense will have a month to present evidence.”

The House prosecution team asked the senator-judges to give it some leeway in the trial, noting that the defense was out to use court tactics to stifle the truth.

Aurora Representative Juan Edgardo Angara said he hoped that the senators would be “fairly liberal” in enforcing the Rules of Court.

“The intention for impeachment to be much more liberal than criminal proceedings is very clear from the records and we are hoping the senators, both lawyers and nonlawyers, will take cognizance of this,” said Angara, a prosecution spokesperson.

“A look at the records of the Constitutional Commission dealing with the impeachment shows that it was not the intention to go into ‘the minutiae of a criminal proceeding,’” he said.

Angara made the appeal as the Senate mulls over Article 2, which accuses Corona of betraying the public trust and violating the Constitution for failing to disclose to the public his statements of assets, liabilities and net worth (SALNs).

Navotas Representative Toby Tiangco, an erstwhile ally of President Aquino who did not sign the impeachment complaint, said that if the prosecution would be allowed to have its way, it would turn the impeachment court into a “circus” in which the accusers would be free to add anything they wanted to the charges during the course of the trial.

Bayan Muna Representative Neri Colmenares said it would not be “fatal” to the prosecution if the Senate decided to be strict in limiting the coverage of Article 2.

Colmenares, a House prosecutor, said that content and not the title should take precedence in the trial.

“Amassing ill-gotten wealth is intrinsically contained in Article 2 because he (Corona) refused to disclose his SALN because he wants to hide his ill-gotten wealth. But presuming that amassing is not in the title, the amassing of wealth is in the body. Don’t tell me that if the title is motion to dismiss but the content is a motion to postpone, the court will still treat it as a motion to dismiss. The defense is wrong,” he said.

As if preparing for the worst in the Article 2 complaint (which some prosecution members touted as the strongest case in the trial), the prosecution team released a statement declaring that Article 1 or Corona’s perceived bias for former President Gloria Macapagal-Arroyo was the most serious among the eight articles of impeachment.

Pangalangan cited Corona’s acceptance of his midnight appointment and his issuance of  a temporary restraining order on the watch-list order against the former President late last year as the biggest proof of his bias for Arroyo.

House Majority Leader Neptali Gonzales said the SALN issue and Corona’s ill-gotten wealth were not only the easiest to prove against Corona, but also the one closest to the public’s heart.

“This is the easiest to understand for the public who are eagerly monitoring the trial on live broadcast. Whether we like it or not, at the end of the day, the public’s understanding of the charges will be a big factor because its opinion will influence the outcome of the case,” Gonzales said.

He said the country was dealing with a “unique” case, describing the impeachment trial of Corona as a “class by itself.”