SWS: 36% of working-age Filipinos don’t see quality of life improvement in next 12 months 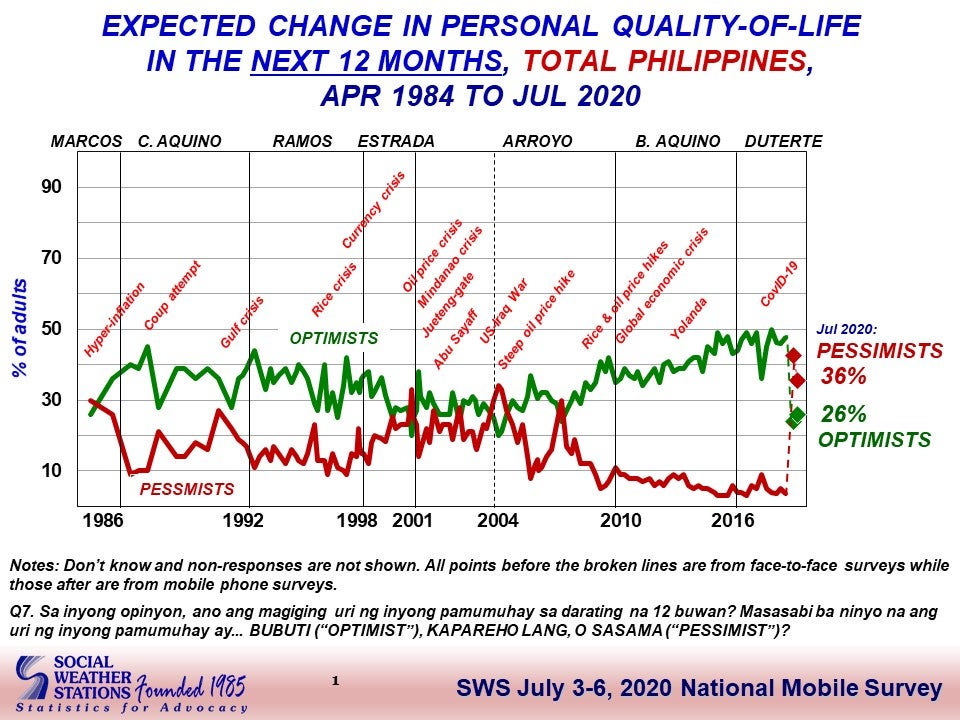 MANILA, Philippines — Thirty-six percent of Filipinos expressed pessimism when asked if they expect their quality of life to improve within the next 12 months, according to the latest Social Weather Stations (SWS) survey.

The latest survey released on Friday asked 1,555 Filipinos aged 18 years old and above if they think their quality of life will improve in the next 12 months.

The pollster added that the survey results also yielded a net optimism score of -10, which SWS classified as “very low.”

SWS previously asked 4,010 working-age Filipinos if they expect their quality of life to improve within the next 12 months, to which 43 percent said they were pessimistic about it.

SWS: 43% of working-age Filipinos expect quality of life to worsen in next 12 months

“Net Optimism is rarely negative. Only 10 percent of all SWS surveys recorded a score of net zero or lower. Moreover, only 5 out of 137 observations are within very low range,” SWS said in a media release.

SWS said that net optimism was highest in Mindanao and Balanced Luzon, which yielded at -5, followed by Metro Manila at -9, and the Visayas at -28.

When compared to the May 2020 survey, SWS said Mindanao greatly improved, as it previously recorded a -32 net optimism score in the areas.

Balanced Luzon, however, hardly changed from a -4 net optimism score in May to -5 in July.

Read Next
South Korea imposes stricter measures to stem spread
EDITORS' PICK
What’s at stake for every fighter at ONE: NextGen
Isko Moreno bares ‘two-pronged’ approach to rehabilitate MSMEs
Climate Change Commission and Nestlé PH to discover sustainability-focused solutions
NCR’s COVID-9 alert level may be downgraded from 3 to 2 soon — DOH
Legarda emphasizes role of ICC/IPs in nation building this IP month
Gordon calls 2 Pharmally execs ‘Senate fugitives’ after no-show in probe
MOST READ
LJ Reyes says Paolo Contis made ‘no efforts’ to talk to her after their split
Gordon to Duterte: You? Teaching me courtesy?
Yang’s Princeton degree raises eyebrows among senators
PDP-Laban Cusi wing Senate bets willing to give way to Duterte
Don't miss out on the latest news and information.