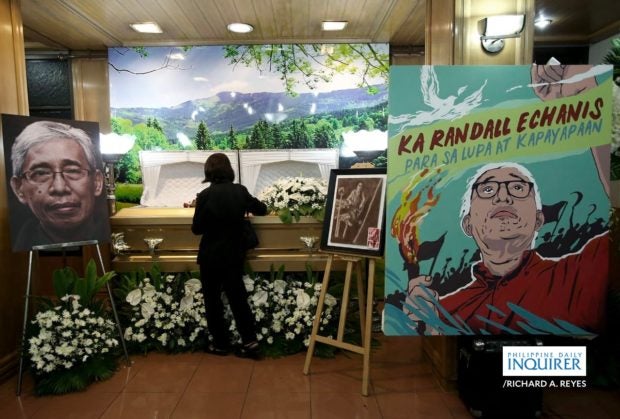 In a statement, Zarate, who is also the House Deputy Minority Leader, cited the preliminary findings of the autopsy report by forensic pathologist Dr. Raquel Fortun.

Fortun said that Echanis was heavily tortured, but a stab wound in the back was the cause of the NDFP consultant’s death.

“The stab wound to the back actually caused injuries to the aorta and the esophagus and it produced hematoma or collection of blood in the chest,” Fortun explained in an online press conference.

Echanis, along with his neighbor Louie Tagapia, were killed last Aug. 10 at the peasant leader’s rented home in Quezon City.

“These are telltale signs of a crime perpetrated by people who are trained assassins,” Zarate said.

“The wound was inflicted to his back just below the seventh rib and it did not even damage the left lung and was placed precisely where it would damage the aorta. This type of job is the work of trained assassins and their business is really to kill,” he added.

Zarate even likened Echanis’ death to that of the slain Senator Aquino, who was killed on Aug. 21, 1983 at the tarmac of the then Manila International Airport.

Aquino was known to be the top opposition figure of the regime of late dictator Ferdinand Marcos.

“There is no doubt that Ka Randy’s advocacies were the reasons why he was assassinated by undemocratic elements of our society. He and Ninoy were killed for their beliefs,” Zarate said.

“As things stand, it is imperative that an independent probe should be conducted both by local and international groups to hold those responsible accountable,” he added about Echanis’ death.