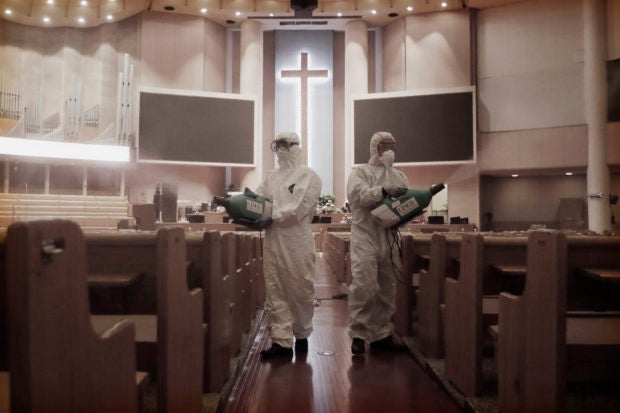 Public officials disinfect pews as a precaution against the coronavirus at the Yoido Full Gospel Church in Seoul, South Korea, Friday, Aug. 21, 2020. South Korea’s Centers for Disease Control and Prevention on Friday reported new infections from practically all major cities nationwide, including Busan, Gwangju, Daejeon, Sejong, and Daegu, a southeastern city that was the epicenter of a massive outbreak in late February and March. (AP Photo/Ahn Young-joon)

SEOUL — South Korea added its most new virus cases in months on Friday, driven by a surge around the capital that appears to be spreading nationwide.

The 324 new infections were its highest single-day total since early March and the eighth consecutive triple-digit daily increase.

Most of the new cases are in the densely populated Seoul region, where health workers are scrambling to track transmissions from sources including churches, restaurants, schools, and workers.

But the new infections reported Friday were from practically all major cities, including Busan, Gwangju, Daejeon, Sejong, and Daegu, the southeastern city that was the epicenter of a massive outbreak in late February and March.

The new figures reported by South Korea’s Centers for Disease Control and Prevention brought the nation’s caseload to 16,670, including 309 deaths.

Health authorities managed to contain the virus in the Daegu region by April, ramping up tests and using cellphone location data, credit-card records, and security camera videos to trace and isolate contacts, which allowed the country to weather the outbreak without placing meaningful restrictions on its economy.

Another factor was that the narrowness of the Daegu outbreak effectively aided its containment — most were linked to a single church congregation with thousands of members.

It’s unclear whether South Korea’s previous formula of success will be as effective since the Seoul region has many more people and new clusters are occurring in various places as people increasingly venture out in public.

Churches had been a major source of new cases in the Seoul area before authorities shut them this week while raising social distancing restrictions, something they had resisted for months out of economic concerns. Nightclubs, karaoke bars, buffet restaurants, and computer gaming cafes are also closed and spectators have been banned again from baseball and soccer games.

Jeong Eun-kyeong, director of the KCDC, said the government should consider stronger distancing measures — possibly including banning gatherings of over 10 people, shutting schools, halting professional sports, and advising companies to have employees work from home — if the virus’s spread doesn’t slow after the weekend.

Jeong said the country is now conducting 50,000 tests per day, compared to around 20,000 per day during the Daegu outbreak.

She said 732 infections have been linked to a Seoul church led by a vocal critic of the country’s president. Sarang Jeil Church pastor Jun Kwang-hun was hospitalized with COVID-19 on Monday after participating in an anti-government protest last week where he shared a microphone on stage with other activists.