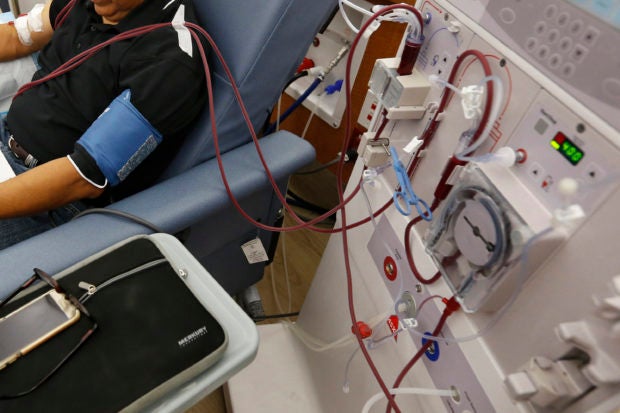 In this file photo, a patient undergoes dialysis at a clinic. (AP Photo/Rich Pedroncelli)

MANILA, Philippines — The dialysis company tagged in the alleged irregularities in the Philippine Health Insurance Corp. (PhilHealth) denied having any “ghost machines” after its treatment claims have been put into question during a Senate investigation.

In a statement on Thursday, B. Braun Avitum Philippines Inc., a chain of dialysis centers, refuted allegations of “inconsistencies” in its reimbursement claims for dialysis treatments.

This, after Senator Panfilo Lacson said in a Senate hearing last August 18 that the excessive number of dialysis sessions in comparison to the actual capacity of machines in six dialysis centers of B. Braun Avitum showed a “possible presence of ghost dialysis patients, if not ghost dialysis machines.”

Lacson added that in 2018, the “sessions to capacity ratio” of 15 dialysis machines in B. Braun Avitum’s dialysis center in Quezon City reached 133.78 percent.

But B. Braun Avitum denied this and maintained that it has “absolutely no ‘ghost machines’ in any of the centers we operate.”

According to B. Braun Avitum, it owns and operates 25 dialysis centers across Luzon, providing more than 27,000 treatments a month for over 3,000 patients.

“Each dialysis center responds to treatment requirements of patients by increasing capacity through additional shifts, if the placement of additional machines is not feasible due to space constraints,” it said.

The company explained that the assumed operating days of five days a week does not apply to B. Braun Avitum.

The firm said its dialysis centers are open six days a week.

In the Senate’s hearing last August 11, senators also questioned the release of P45 million in cash advances to B. Braun Avitum through PhilHealth’s interim reimbursement mechanism (IRM), which is specifically for hospitals treating COVID-19 patients.

In response to this, B. Braun Avitum said it applied to avail of the IRM fund “in good faith” and based on PhilHealth guidelines.

“We did not misrepresent our application for IRM funds to be used for the treatment of COVID-19 patients,” it added.

B. Braun Avitum was also linked P9.7 million wrongly credited by some PhilHealth regional officials to a rural bank in Bataan.

But the company said it was “in no way…connected with the dealings of PhilHealth with Balanga Rural Bank, Inc.”

Further, the company reiterated that it is registered with the Securities and Exchanges Commission (SEC), contrary to the information presented by Lacson during one of the Senate hearings.

In a previous statement, B. Braun Avitum said it holds itself “strictly to the highest standards of integrity in all its business dealings.”

Further, the company said it is “one with the government in its quest for transparency and good governance,” adding that it is willing to extend its “full cooperation in this endeavor.”