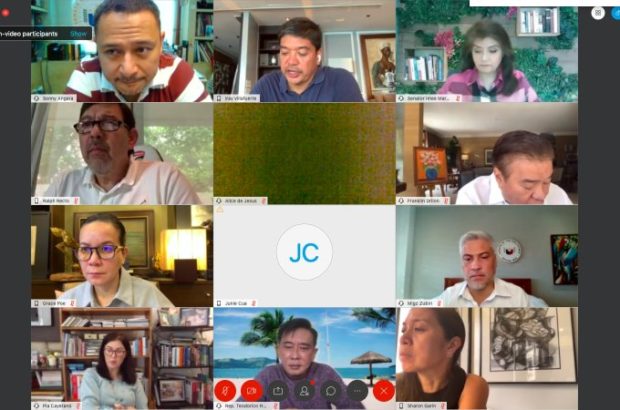 Second meeting of the bicameral conference committee on the disagreeing provisions of the proposed Bayanihan to Recover as One Act or Bayanihan 2 on Monday, August 17, 2020. Photo courtesy of Sen. Sonny Angara’s office.

MANILA, Philippines — The Senate and the House of Representatives are still debating on how to allocate the P10-billion tourism assistance under the proposed Bayanihan to Recover as One Act or the Bayanihan 2 bill, Senate Minority Leader Franklin Drilon said.

The Senate is pushing for the allocation of the P10 billion to tourism enterprises but the House wants the funding to go to tourism infrastructure, according to Drilon.

(That is a complicated debate. The version of the Senate is that P10 billion will be allocated for the assistance to tourism enterprises. However, the position of the House of Representatives is to use the P10 billion to build roads and infrastructure for tourism areas.)

(We cannot resolve it because senators want the P10 billion to act as a stimulus and assistance for the tourism enterprises but the House of Representatives wants funding for roads.)

Senators and House lawmakers are currently reconciling the disagreeing provisions of their respective versions of the Bayanihan 2 measure through a bicameral conference committee, which Drilon is a member of.

The Bayanihan 2 bill, seen to replace the expired Bayanihan to Heal as One Act, lays out for the country’s COVID-19 response and recovery plan and allocates funds to help struggling sectors cope up with the impacts of the coronavirus pandemic.

Members of the committee had already earlier agreed on a P162-billion funding. However, only P140 billion will be readily available.

Once Congress ratifies the reconciled measure, it will be transmitted to President Rodrigo Duterte for his signature.

According to Drilon, House lawmakers have been insisting that the P10 billion under the measure be given to the Tourism Infrastructure and Enterprise Zone Authority (TIEZA)

But the Senate was not amenable to that, he said.

“Pinipilit nila na dapat ito ay ilagay sa TIEZA pero hindi pumapayag ang Senado,” Drilon said, pointing out that it is the businesses under the tourism sector that needs assistance from the government in terms of loans.

(They are insisting that we lodge all of that funding under TIEZA but the Senate does not want to.)

(They are the ones really affected by the pandemic because there is no domestic tourism. But the House of Representatives wants money for infrastructure, we did not allow that because we don’t need infrastructure right now. What we need is to help this struggling sector in terms of loans.)

Senators , Drilon said, tried to compromise with the proposal of the lower chamber by suggesting that out of the P10 billion, P1 billion will be given to TIEZA, P3 billion to aid displaced workers and P6 billion for the loan assistance to tourism enterprises.

But the House still insisted on putting all of the P10 billion to TIEZA, according to Drilon.

(That is the suggested compromise. I thought we could finally agree to that but when we met yesterday again, it turns out we still won’t… Until now we haven’t arrived at an agreement yet.)

Senators earlier said the bicameral discussions on the Bayanihan 2 are expected to wrap up on Thursday, with the Senate ratifying the reconciled measure in the afternoon.