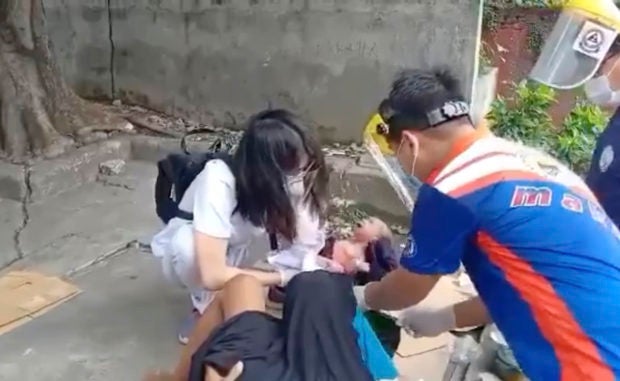 CALM AND COLLECTED Mary Lorraine Pingol, a Medicard Philippines nurse, did not even take off her backpack as she helped a homeless woman give birth to a baby girl on a sidewalk in Makati City on Tuesday morning, in this cell phone photo taken by a member of the Barangay Bangkal Fire Emergency Rescue Disaster Support staff. VIDEO GRAB ( www.inquirer.net ) Video : Bangkal Ferds Makati

MANILA, Philippines — Despite running late for work on Tuesday this week, 29-year-old nurse Mary Lorraine Pingol stopped to help a homeless woman deliver her baby on a sidewalk in Makati City.

Had it not been for her, Jeca Mae Rausa, 31, and her baby girl would have been put in danger, according to Barangay Bangkal Councilor Christian Jacinto.

The barangay’s rescue team received a call around 8 a.m. on Aug. 18 concerning a woman about to give birth near General Estrella Street and Osmeña Highway.

Unfortunately, all of their nurses and midwives had not yet reported for duty, and their barangay staff was only trained for first-aid treatment, not emergency delivery, Jacinto said.

As much as they wanted Rausa to deliver her baby in a hospital, he said, the nearest one, Ospital ng Makati (OsMak) in Barangay Pembo, was 7 kilometers away.

“Our barangay then called on a passing nurse, who only identified herself as a certain Lorraine, and, fortunately, she immediately helped our men to deliver the baby,” Jacinto told the Inquirer in a phone interview.

It took less than four minutes for Pingol, “all calm and collected,” to safely deliver the baby girl, and cut and clamp her umbilical cord.

“When she was sure that the mother was already OK, she got up and sanitized with our alcohol. She bid her goodbye, saying she was already late for work,” the barangay officer said.

The mother and her newborn were later taken to OsMak where doctors said they were both in good health.

The Bangkal Fire Emergency Rescue Disaster Support posted the photos and videos of the nurse delivering the baby on its Facebook page as a “salute and respect” to Pingol and all medical front-liners.

The post had been shared by thousands of netizens who applauded Pingol for being a good Samaritan.

“When I saw the mother’s condition, she really needed help. She could have been in a serious situation,” Pingol told the Inquirer in a phone interview. “There is an urgent need to help them. And since I was there and I am capable of giving help they need, I gave it.”

Pingol said the placenta had already been expelled when she was called by the barangay rescue officers, and she needed to pull it out completely and clamp and cut the umbilical cord.

“I was a little scared while doing it, but I told myself, I have to overcome this fear, because if I do not feel confident, I won’t be able to do what must be done,” she said.

She said she tried to recall all the deliveries she had performed while an intern at a hospital when she was still a nursing student at Far Eastern University in Manila nine years ago.

After reaching her office, and to make sure that she had performed everything properly, she immediately searched the internet to check the procedures.

“Thankfully, they were all correct,” Pingol said.

She said Rausa was “very relaxed” and surmised that it wasn’t the mother’s first child because the baby came out easily.

“If you have the capacity to help another person who is in need, especially if it is a life and death situation, just do it,” Pingol said, explaining her action. “But make sure you really know what you are doing. If not, find another person who can help.” 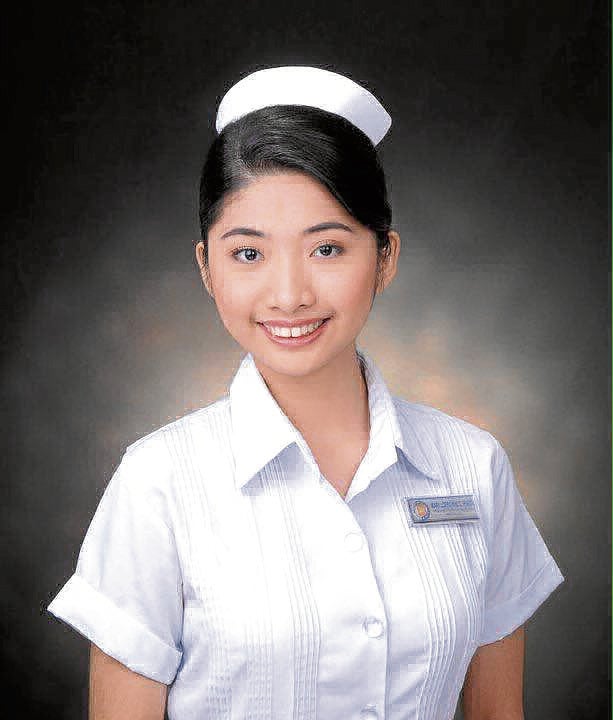 She said she used to walk for about 30 minutes to her office when public transportation was suspended during the lockdown. Passing homeless people, she would share some food with them.

Pingol, who is supposed to be at Medicard Philippines by 7 a.m., arrived more than one and a half hours late that day but she wasn’t scolded.

“The employees were good to me. They were even happy for me and congratulated me because I was able to help others,” she said.

Pingol said one of Rausa’s friends came to thank her and said mother and child were doing fine.

“That was enough for me,” she said.

Pingol graduated in 2011 and passed the board that year. She worked as a trainee at a hospital in Tarlac province the following year.

She said she was diagnosed with leukemia in 2013, and had been in remission for the past six years, prompting her to give up working in a hospital to avoid compromising her immune system.

“I am grateful for my work now as a company nurse because if I were in a hospital now, I may have contracted COVID-19, or worse dead, since I am immunocompromised,” Pingol said.

She described herself as a “survivor” and a “fighter.”

Jacinto was thankful to Pingol not only for helping the mother but also in helping the barangay do its job.

“What she did was a selfless act that should be commended,” Jacinto said. “Not second-thinking in helping others, especially now that most people are having a difficult time because of the pandemic, is an act that should be emulated by everyone.”

According to Jacinto, Pingol’s act boosted the morale of all frontliners in the barangay, making them “strive for better service to the people.”

“We badly needed that push now, especially when some of our front-liners were being discriminated against by our communities, saying we are COVID-19 carriers. Still we do our jobs,” he said.

Earlier in the month, a nurse from another medical insurance company was evicted from her boarding house at Barangay Olympia, also in Makati, after she contracted COVID-19.

The Makati government is investigating the case. Mayor Abby Binay reiterated that the city had an ordinance prohibiting and penalizing all forms of discrimination against persons with infectious diseases, as well as nurses and other front-liners.