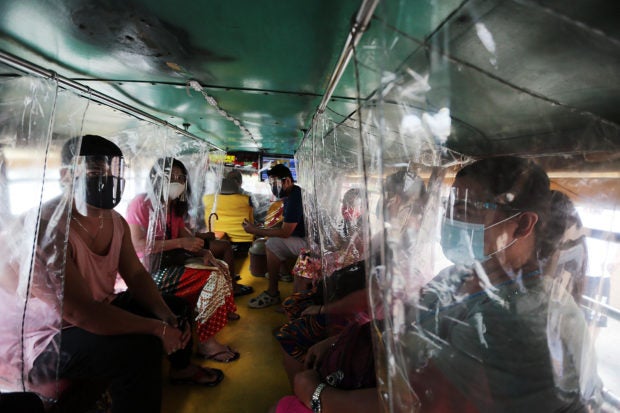 BACK TO GCQ A face mask and face shield combo is a must for passengers of a jeepney plying the Malabon-Monumento route on Wednesday, Aug. 19, as the National Capital Region reverted to general community quarantine. The more relaxed lockdown also meant the return of public transport. —GRIG C. MONTEGRANDE

MANILA, Philippines — A uniform curfew between 8 p.m. and 5 a.m. will be observed in Metro Manila where gatherings have been limited to 10 people instead of 10 percent of the venue capacity due to the shift to “stricter” general community quarantine (GCQ), a Palace official said on Wednesday.

According to presidential spokesperson Harry Roque, only the cities of Manila, Muntinlupa, and Pasig were exempt from the curfew because their local governments needed to amend their respective ordinances first.

Roque, in an announcement over state-run PTV, said these were part of the stricter GCQ guidelines recommended by Metro Manila mayors and approved by the National Task Force on the new coronavirus disease (COVID-19) during a meeting Tuesday night.

The National Capital Region and the provinces of Bulacan, Laguna, Cavite and Rizal were downgraded to GCQ on Aug. 19 after being placed on modified enhanced community quarantine (MECQ) as a compromise with health groups that had called for a “time-out.”

The shift to GCQ was expected to help revive the economy, which was still reeling from the effects of the pandemic.

When asked for comment, top officials of some business groups said they hoped adjustments would be made in the curfew.

“There has to be an exemption for companies that work at night,” said John Forbes, senior adviser of the American Chamber of Commerce of the Philippines.

Nabil Francis, president of the European Chamber of Commerce of the Philippines, said the curfew should start later than 8 p.m. for the sake of workers going home to nearby provinces daily.

Roberto Claudio, vice chair of the Philippine Retailers Association, said retailers can live with the curfew, but food establishments would be affected by shorter operating hours.According to Roque, the restriction of gatherings to 10 individuals applies to religious events as well.

He said that salons and barbershops may reopen and restaurants may accept dine-in customers, but the local government units would set the allowed capacity for these establishments.

The Department of Trade and Industry (DTI) said businesses that were expected to open shortly before Metro Manila and other areas returned to MECQ must wait until the end of the month to reopen.

“The reopening of the last batch sectors like gyms, review centers, internet cafes will be postponed until [Aug.] 31, following the principle of gradual reopening from MECQ to GCQ,” Trade Secretary Ramon Lopez Lopez said in a Viber message to reporters on Wednesday.

He was referring to a list of businesses that the DTI had allowed to reopen in Memorandum Circular No. 20-44, which was issued on July 31. These included testing, tutorial and review centers; gyms, fitness centers, and sports facilities although group workouts like Zumba and yoga were still banned; internet cafes; dermatological clinics “offering aesthetic procedures”; other personal-care services (except full-body massage services); pet grooming services and drive-in cinemas.

They were supposed to be allowed to reopen at 30 percent capacity but the plan was shelved when the metropolis returned to MECQ.

But Lopez clarified that the postponement would apply only to Metro Manila, Laguna, Cavite, Rizal and Bulacan provinces. In other area under GCQ, these businesses could start operating.