‘Time to send aged NK prisoners back to North’ 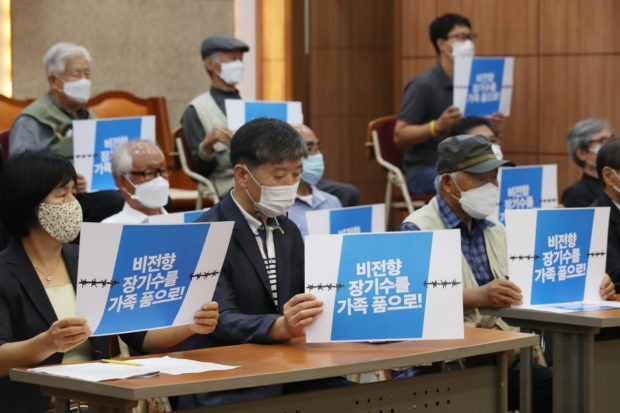 Civic and religious group members hold signs that says “Send unconverted long-term prisoners back to their family!” during a press conference held in Seoul on Tuesday. (Yonhap)

SEOUL — A group of civic and religious organizations here urged the Seoul government to free the unconverted, long-term North Korean prisoners here and send them back to the North, with this year marking the 20th year of the first and last such large-scale repatriation.

They were referring to former North Korean spies and prisoners of war who refused to abjure communism, who have been held in South Korean prisons for decades. Many are in their 80s and said to be suffering illness.

Local organizations, including the Support Committee for Prisoners of Conscious, Fellowship with the Sufferers, National Council of Churches in Korea Human Rights Center and Korea Alliance for Progressive Movement, formed a committee Tuesday to prepare for campaigns to send long-term prisoners back to the North in a second round.

“The repatriation of long-term unconverted prisoners is a basic human rights issue,” the committee said during a press conference in Seoul, stressing the “freedom to move” and “right to return to home country” behind their advocacy. “We will work together to help 14 prisoners who wish to repatriate and return to their home country and their family as soon as possible before they pass away.”

The committee stressed the repatriation was agreed upon at the June 15 South-North Joint Declaration from the inter-Korean summit in 2000, as well as part of the agreement in the Panmunjom Declaration in 2018 that stated the two sides will endeavor to “swiftly resolve the humanitarian issues that resulted from the division of the nation.”

In 2000, Seoul sent 63 North Korean spies and prisoners of war back to North Korea, in the first large-scale repatriation of its kind since the 1950-1953 Korean War, following a historic inter-Korean summit that brought about a thaw between the two Koreas.

According to the committee, among 33 prisoners who wished for repatriation since 2000, just 19 remain, as the others have since died.