MANILA, Philippines — Armed Forces of the Philippines (AFP) chief of staff Lt. Gen. Gilbert Gapay on Wednesday sought for the immediate filing of charges in court against the nine policemen involved in the killing of four soldiers in Sulu, saying there was an “intent to kill” the military intelligence officers.

At a Senate hearing of the public order committee on the fatal shooting of the four Army men, Gapay also flagged a possible cover-up on the killing of the soldiers.

He insisted that the initial spot report of the police on the incident was “fabricated, full of inconsistencies and misleading.”

READ: Military agents shot in the back – DOJ 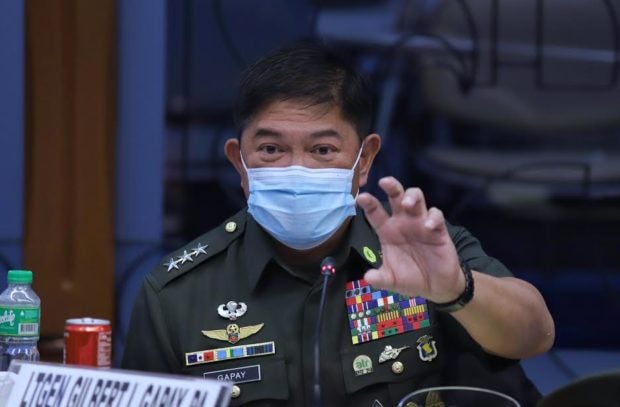 Gapay noted that should these cases be elevated to the courts, the “real motive” behind the killing of the military officers will surface.

“We urge the immediate filing of murder, planting of evidence, and neglect of duty charges as recommended by NBI to the proper court immediately. We have been waiting for two months already and justice delayed is justice denied,” he said.

“Bakit ganito ang nangyari? There’s something wrong here. That’s why if we file this in court, we are also hoping that the real motive, intent, of the killing of the four Army personnel would come out. The truth should come out,” he added.

The Army officers had identified themselves to the policemen but were still shot by the policemen when one of the officers alighted, unarmed, from the sports utility vehicle (SUV) they were riding in.

The Philippine National Police (PNP) offered a different version of what happened. The Sulu police force claimed that its men stopped the SUV carrying the military intelligence officers and instructed them to proceed to a nearby police station for verification of identities.

According to the PNP, as the police team and the Army officers neared the police station, the officers’ SUV sped off, which triggered a car chase. Police said they only defended themselves as the soldiers opened fire.

However, Gapay said that upon reading the police’s initial spot report, he immediately sought the help of the NBI for an impartial investigation into the incident.

“We requested the NBI to assist in the investigation because, dun palang sa spot report, we have the feeling that we would want to get an impartial investigation on this,” he told senators.

An investigation by the NBI showed that the police officers simultaneously attacked the Army Intelligence agents without “the opportunity to defend themselves.”