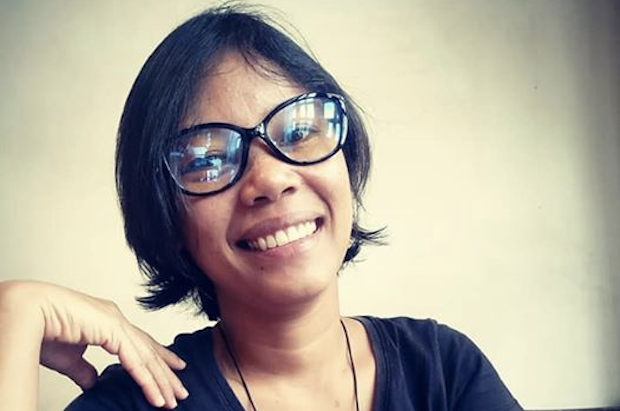 BACOLOD CITY, Negros Occidental, Philippines — For the past three years, Zara Alvarez had been monitoring and documenting the killings and arrest of farmers, lawyers and activists on Negros Island. She organized missions to look into cases of suspected human rights violations, coordinated with lawyers and helped families of the victims.

Around 7 p.m. on Monday, Alvarez became a victim herself.

A man wearing a face mask and a cap shot her repeatedly as she was walking with two others to her boarding house at Eroreco Subdivision in Barangay Mandalagan here.

Alvarez, 39, a single mother to an 11-year-old girl, died outright.

“Witnesses heard six gunshots. She was shot first on the back,” Capt. Richard Pajarito, chief of Station 3 of the city police, told the Inquirer on Tuesday.

The assailant fled on a motorcycle driven by an accomplice, Pajarito said.

Alvarez, a former political detainee, served as a paralegal for the human rights group Karapatan and as research and advocacy officer of the nongovernmental organization Negros Island Health Integrated Program.

“I bleed due to this neverending injustice and violence. I just cannot believe this continuing madness of senseless killings. These systemic killings of human rights defenders and activists must be condemned and must stop,” Alminaza said in a statement on Tuesday.

He described Alvarez as a champion against injustice, always ready to organize farmers, peasants, workers, jeepney drivers and even church people for the cause.

“Zara, they took your life, believing that they can silence the cause you are fighting for,” Alminaza said. “But no, Zara, your martyrdom in the cause for justice will inspire us to advance the cry for justice—the cry of the oppressed.”

Alvarez was the 89th victim of killings of human rights defenders, lawyers and other activists since January 2017 on Negros Island based on a list she had helped compile and update.

Karapatan said she was the 13th human rights worker of the group killed since President Duterte took office in 2016.

“Zara Alvarez was a fierce and dedicated human rights defender, and her death is a tremendous loss for all of us and those who worked with her in advancing and defending people’s rights and we strongly call for justice,” Karapatan secretary general Cristina Palabay said.

Activist groups suspect that state agents were responsible for both killings.

Echanis and Alvarez were among 600 people listed as terrorists by the Department of Justice (DOJ) in 2018 in a proscription petition in the regional trial court of Manila. They were removed from the list after the petition was amended last year.

Alvarez, however, continued to receive “relentless threats, vilification and harassment from the military,” Palabay said.

“It will not do justice to the victim and the family if the public engages in guesswork and speculation,” Police Brig. Gen. Bernard Banac, the Philippine National Police spokesperson, said in reaction to allegations that state agents were involved in the killing of Alvarez.

“A proper investigation by Bacolod City Police is underway. We urge all concerned to allow the investigation to proceed sans unfounded allegations that only distract the focus of our investigators,” he said. “Anyone who has information that can help quickly solve the case is welcome.”

Karapatan said 318 individuals who were noncombatants, including 182 human rights defenders, have been killed in the implementation of the government’s counterinsurgency program from July 2016 to June 30 this year. It said 259 farmers were separately killed in politically motivated attacks during the same period.

Among the prominent human rights activists killed recently were Elisa “Nene” Badayos and Elioterio Moises, who were gunned down on Nov. 28, 2019, in Bayawan City in Negros Oriental.

Badayos was a provincial coordinator for Karapatan, while Moises was a member of the farmers’ group Mantapi Ebwan Farmers Association. They were taking part in a mission that investigated alleged human rights violations in Negros Oriental when they were attacked.

In Manila, Bayan Muna Rep. Carlos Isagani Zarate said the “attacks against the political opposition and critics of the administration is really getting more intense.”

“It seems that the said (DOJ “terrorist”) list has become a hit list of sorts as many of those named are now either arrested on trumped-up charges or worse, ended up being assassinated,” he said.

In May last year, an unknown person sent a text message to the Karapatan national office, warning that Alvarez would be the next to be killed in Negros after Escalante City Councilor and human rights advocate Bernardino “Toto” Patigas was gunned down.

Siegfred Deduro, Bayan Muna vice president for the Visayas, said the killings of Alvarez and Porquia were “terrorist acts” meant to sow fear among those critical of the government.

“The Duterte regime is hell-bent in resorting to the killing of political dissenters in a futile attempt to silence the growing anger of the people against the worsening health and economic crisis resulting from flawed policies and corruption,” Deduro told the Inquirer.

The Senate committees on public order and dangerous drugs and on justice and human rights, which jointly investigated the Negros killings, released their report in January recommending that an anticommunist vigilante group “Kagubak” be investigated for the killings perpetrated by unidentified assailants.

In an interview with the Inquirer on July 23, Alvarez raised concern over the continued killings of activists in Negros despite the pandemic.

“The killings have continued even amid quarantine measures when movement is supposedly restricted. How many more will die?” she told the Inquirer.

“Despite his cowardly denial of his involvement in extrajudicial killings, he has not publicly withdrawn his threats against activists nor ordered the perpetrators to stop the killings,” he added.