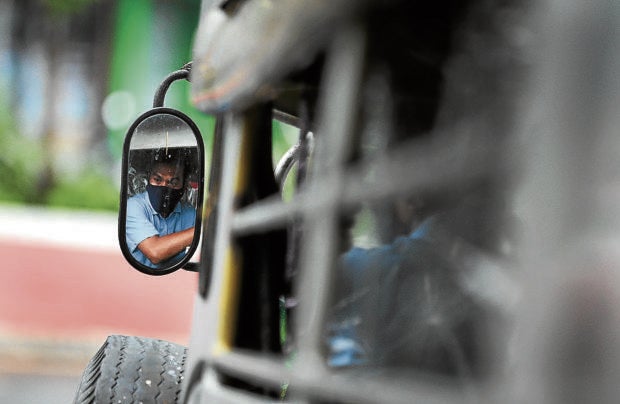 BACK BEHIND THE WHEEL More jeepney drivers are expected to resume their routes today although the 12,443 PUJs given the go signal to operate is just a small fraction of the 55,000 units throughout Metro Manila. —GRIG C. MONTEGRANDE

The total number of PUVs—buses, taxis, transport network vehicle services, modern and traditional jeepneys—was higher than the 57,936 that initially went back on the road when the National Capital Region (NCR) was first placed under GCQ on June 1.

The biggest increase, according to LTFRB data, was in the number of additional public utility jeepneys (PUJs), which jumped from 7,945 to 12,443, or an increase of almost 60 percent.

“Hopefully, this will avoid and avert problems in the past as regards to the lack [of] public transport, but we are not saying these are the (final) numbers that will run across Metro Manila,” LTFRB Chair Martin Delgra III told reporters on Tuesday. “As (we have told the House committee on Metro Manila development), we will be releasing new routes weekly and we will assess which areas need more PUVs.”

Based on the LTFRB’s own numbers, commuters in the southern part of the metropolis would probably have a harder time getting a ride. Las Piñas, for example, still has no traditional PUJs running while Parañaque has only 78 modern jeeps back on the road.

The municipality of Pateros and Muntinlupa City, on the other hand, have 336 and 240 modern and traditional jeepneys, respectively.

So far, Quezon City, Manila, Makati and Caloocan have the highest number of jeepneys given the go signal to ply routes.

Based on its action, the LTFRB seemed determined to avoid a repeat of June 1, when thousands of commuters, especially in the eastern metro, ended up stranded due to the lack of available PUVs. Initially, the Department of Transportation (DOTr) wanted to adopt a “partial, gradual and calibrated” approach to reviving public transport amid the coronavirus pandemic.

But the sluggish reopening of routes instead disenfranchised both weary commuters and financially struggling jeepney operators and drivers who had been unable to ply their routes since Metro Manila was placed on lockdown in March. Before the pandemic shut down public transport, there were 55,000 jeeps in the NCR.

Today, however, the LTFRB will allow more PUVs to operate at once, save for 2,295 jeepneys that will return to the streets tomorrow, Aug. 20.

Delgra admitted that the board faced several structural challenges when they first reopened public transport. But “at this point in time, we are better prepared to address that … I would like to think that what will happen [today] will be quite an improvement [compared to] the time we opened up public transport last June 1,” he said.

In the past two weeks, the LTFRB also worked on streamlining all available PUV routes to better service the public, according to LTFRB member Ronaldo Corpus.

In choosing which routes to open, he explained, they considered the “trunk-feeder” system, meaning, opening smaller PUV (jeeps, UV Expresses) routes that could best feed into bus and train routes.

“At the moment, we’re having difficulty thinking about the jeepney routes that have now been converted into bus routes,” Corpus said, adding, “But we continue to study how to best sustain the operators [who were displaced].”Four more bus routes would be opened within the week, Delgra said.

Trains back in operation

All four railways in the metropolis would also resume operations today, according to the DOTr.

The Metro Rail Transit 3, earlier hounded by a coronavirus outbreak among depot personnel, was back to normal with 18 trains running on the mainline.

The Light Rail Transit (LRT) Line 1, which recently announced a retrenchment that would affect 100 employees, would be dispatching 24 trains during the morning and afternoon peak hours, and 18 during off-peak hours.

The LRT Line 2 and the Philippine National Railways, meanwhile, would be deploying five and 10 trains daily, respectively.

All public transport would still conform to mandatory health and sanitation guidelines set by the national government, including reduced passenger capacity and the “no mask, no face shield, no entry policy.”