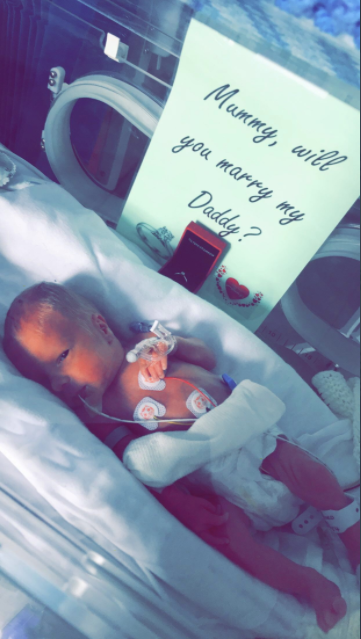 Baby Cobie in his incubator with the card “Mummy, will you marry my Daddy?” Image: Twitter/@SFHFT

A 26-year-old mom who gave birth to a premature baby got an “unusual” but romantic surprise when her partner of eight years asked for her hand in marriage with the help of their newborn son.

Sian Stafford from Derbyshire, United Kingdom, faced some challenges delivering her baby boy during the lockdown, as per the Sherwood Forest Hospitals National Health Service Foundation Trust yesterday, Aug. 17. The mom gave birth to baby Cobie on Aug. 3, ten weeks earlier than the expected due date.

After welcoming their second child, her partner John Sellors realized that it was time to pop the big question and he wanted to make it extra special by including their son.

The nurses gladly complied with Sellors’s request to put the engagement ring and a note stating “Mummy, will you marry my Daddy?” inside Cobie’s incubator.

What a lovely story💍👍🥰. A Mum from Pinxton in Derbyshire, who has faced the difficulties of having a premature baby during lockdown, was blown away recently when her partner of eight years, asked her to marry him in a rather unusual, but romantic way – https://t.co/t4HDrVpT2V pic.twitter.com/bLvHBHHa5z

“I’m not usually the romantic type, but I really wanted to do something to lift Sian’s spirits and she had been dropping hints for a while about wanting to get married,” Sellors told the hospital. “The nurses were great and really helped make it a special proposal to remember.”

The couple apparently went out for a coffee run while the staff at King’s Mill Hospital sorted the man’s request. When they returned, the nurses told Stafford to check her baby because his breathing machine was taken off and they would be able to see his face better.

“I didn’t even notice the note and the ring at first!” the mom said. “But then John said, ‘Look, I think Cobie wants to know something!’ Then I read the note and it was such a surreal but happy moment.”

Stafford recalled how she did not believe she was in labor until she was at the hospital with her partner. The mom said that the hospital’s midwives, nurses and staff have been “amazing and so supportive” especially since she has to “split [herself] in two” for her newborn son and her 4-year-old daughter Ruby.

The couple’s daughter could not go inside the hospital and see her new brother due to the COVID-19 restrictions.

“It’s been really difficult not being able to let Ruby meet him, she can’t wait to give him a cuddle and say hello to her new baby brother,” the 29-year-old father said.

Sellors added that they have been doing video calls with their daughter so she could get a glimpse of Cobie.

“We are currently concentrating on getting Cobie home, but yes we will hopefully start planning once things have settled down for us,” the mom added.

Baby Cobie will still be at the hospital’s care until his health continues to improve day by day. The family is hoping to finally bring the baby home in the coming weeks. JB