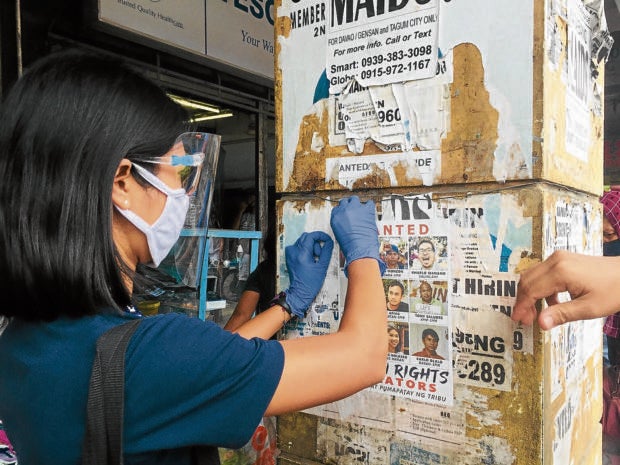 DAVAO CITY, Davao del Sur, Philippines — Human rights activists alarmed by the appearance of their names in a “wanted” poster here have filed a supplemental complaint and an urgent request for an investigation by the Commission on Human Rights (CHR) on Monday.

This was the second time that Jay Apiag, secretary-general of Karapatan in Southern Mindanao, sounded a distress call to the CHR, saying their lives could be in danger as the posters, which called them “berdugo” (executioner) and “human rights violators,” had been widely circulated in urban poor communities where they worked.

“We want the CHR to investigate because given that the posters were posted in key urban poor areas of the city where we operate, and given the Anti-Terrorism Law, which is already in effect, these posters seem to condition the mind of the public that we can be open for arrests, and worst, assassination,” Apiag told the Inquirer.

The first complaint was filed on July 24, after a set of similar posters appeared in Barangays Maa and Matina Crossing here a few days before President Duterte’s State of the Nation Address.

“On Aug. 13, we were informed by our community-­based paralegal volunteers of another episode of vilification plot against activists and leaders in Davao City,” said the complaint addressed to Jose Luis “Chito” Gascon, CHR chair, and coursed through Edmundo Albay, CHR regional director.

“These posters yet again bore the pictures, names and leaders of progressive groups previously tagged. But this time, it includes five new personalities,” the complaint said, citing Bishop Hamuel Tequis of the United Churches of Christ in the Philippines Haran, who was “appallingly branded as CPP (Communist Party of the Philippines) member;” Dr. Jean Lindo, chair of the women’s group Gabriela in the region; Meggie Nolasco, executive director of Salugpungan Ta’ Tanu Igkanugon Community Learning Center; Maritess Kafiola of Kilusang Magbubukid sa Pilipinas; and Karlo Manang of Salinglahi.

“This another [set] of attacks is extremely alarming as these posters came less than a month since the Anti-Terror Act came into being,” said the complaint signed by Apiag. “[This] series of smear campaign [creates] a detrimental atmosphere for the human rights defenders, development workers and cause-­oriented groups,” he said.

The CHR central office, Apiag said, acknowledged their complaint on July 28 and asked its regional office here to investigate the threats.

“We can only point squarely to the rabid mercenaries [of] the state, who have glaring records of attacking activists and rights defenders,” Apiag said in a separate statement.

“What will be the reason for the government to post those posters?” Kraft asked.