‘I’ve been in Davao all along,’ Duterte says after rumored treatment in Singapore | Inquirer News

‘I’ve been in Davao all along,’ Duterte says after rumored treatment in Singapore 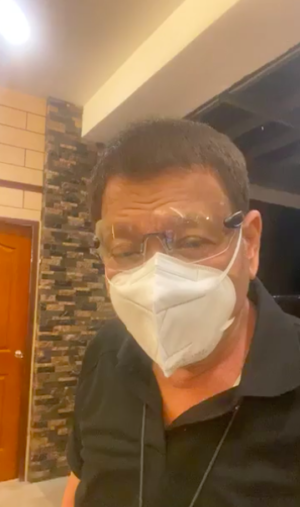 LOOKING FOR ME? President Duterte says he has been staying in Davao City, not in Singapore.

MANILA, Philippines — President Rodrigo Duterte on Monday quashed rumors that he flew to Singapore over the weekend for emergency treatment, saying he has been staying in Davao City “all along.”

Duterte belied the “fake news” circulating about him in a brief Facebook live by his former aide and now Senator Christopher “Bong” Go.

“Well as you can see clearly, I’ve been in Davao all along,” Duterte said.

In the same livestream, Go said the President was about to attend his meeting with members of the government’s COVID-19 task force.

(Have no worries and for those spreading lies have conscience. Our President is working for the country.)

Earlier, Go posted a photo of the President while eating with his family to debunk the rumors.

Duterte is to decide on new quarantine classifications for Metro Manila and its nearby provinces and thereafter and he’s scheduled to address the nation on Monday night. [ac]