Groups lobby use of ‘active transport’ in Albay 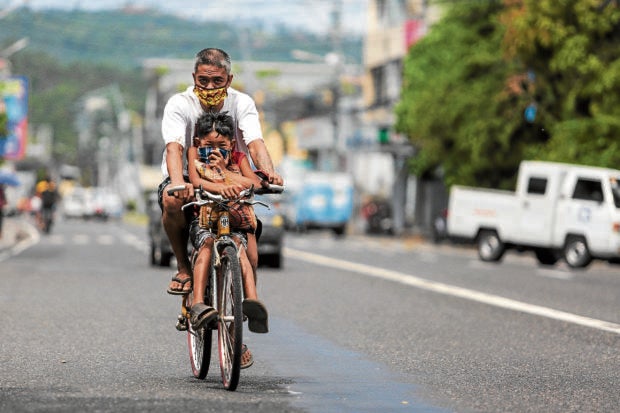 SATURDAY RIDE A Father and his son rides on a bicycle carrying a small sack of rice from the market early morning on April 18, 2020, Saturday in Legazpi City, Albay province, as the enhanced community quarantine continues until the end of the month of April. MARK ALVIC ESPLANA / INQUIRER SOUTHERN LUZON.

LEGAZPI CITY, Albay, Philippines — Several groups in Albay province are lobbying for people to use “active transport” as an alternative mode to get around as the country transitions to a new normal that requires physical distancing and compliance to health protocols, while no cure has yet been found for the new coronavirus disease (COVID-19).

The use of “active transport” — bikes, scooters and skateboards — initiated by United Tabaco Cycling Community (Utacc) and United Architects of the Philippines Tabaco chapter—has so far gained the support of 2,248 persons who have signed the signature campaign online or in venues like bike shops and police stations here since it was started by the two groups on July 5.

People-oriented mobilityPublic transportation like utility jeeps, buses, vans, taxicabs and tricycles have been allowed back in the Bicol region provinces of Albay, Sorsogon, Camarines Sur, Camarines Norte and Catanduanes after the region transitioned to modified community quarantine.

But since these public transport modes are only allowed to operate at half their capacity, the public should adopt to new methods that will increase not just the mobility but also the health and safety of commuters, they said.

“The shift to a people-oriented mobility paradigm should be inculcated in policymakers, legislators, government officials, planners, police and traffic enforcers at both national and local levels,” the groups said in their proposal.

Urgel Cargullo, founding member of Utacc, said the absence of public transportation during the strict lockdown has made biking popular among commuters and this should be encouraged and supported even when jeeps, buses and tricycles are now back on the road.

The groups’ proposal gained the support of Albay Vice Gov. Edcel Greco Lagman who, in a resolution on Aug. 10, called for the creation of the Albay Active Transport Unit (AATU) under the Provincial Engineering Department.

The AATU will be responsible for reducing the carbon emissions by providing sustainable and environment-friendly mobility to commuters, and allocate road space for active transport, among others.

Under the plan, a cycling network will also be established throughout the province, particularly near and around hospitals, public markets, commercial centers, public transport terminals and other open public spaces.

Before the pandemic struck in March, Utacc has already been providing schools movable bike racks to promote the use of active transport in Tabaco City and Joroan village in Tiwi town, which is a favorite destination of cycling enthusiasts from Albay and Camarines Sur, Cargullo said.

It was also proposed that local roads would be transformed to provide safe or dedicated lanes for bikers and scooter or skateboard users.