Ship that oozed oil off Mauritius coast splits in two

PORT LOUIS, Mauritius — A ship that has leaked more than 1,000 tonnes of oil in pristine waters off the Mauritius coast has split into two, its Japanese operator said Sunday.

The bulk carrier MK Wakashio ran aground on a coral reef off the southeastern coast of Mauritius on July 25 and began oozing oil more than a week later, threatening a protected marine park boasting mangrove forests and endangered species.

Mauritius declared an environmental emergency and salvage crews raced against the clock to pump the remaining 3,000 tonnes of oil off the ship.

“It was confirmed on August 15 that the vessel has broken into two,” the ship’s operator Mitsui OSK Lines said in a statement, noting that the information came from the vessel’s owner, Nagashiki Shipping.

The split was caused by a crack in a cargo hold on its stern side, Mitsui said.

Officials had been preparing for the development for days, and images taken Saturday indicated it was inevitable, with the two pieces only partially attached.

Nearly all the remaining 3,000 tonnes of oil had been pumped off the ship by that time, though there were still 90 tonnes on board, much of it residue from the leakage.

Mitsui noted Sunday that “an amount of unrecovered oil is believed to have leaked out of the vessel”.

The salvage team intends to pull the front two-thirds of the ship out to sea using two tugboats and let it sink to avoid further damage to the Mauritian coastline, said a police official in the Mauritian capital Port Louis, speaking to AFP on condition of anonymity because he was not authorized to brief the media.

The remaining portion is still stuck on the reef and officials have not yet determined how they might remove it, the official said.

The weather is expected to become rougher in the coming days, Mauritius’ government said in a statement Saturday night, noting that waves could climb to 4.5 meters.

The government of Prime Minister Pravind Jugnauth has come under fire, including from opposition leaders, for doing too little in the week after the ship ran aground. 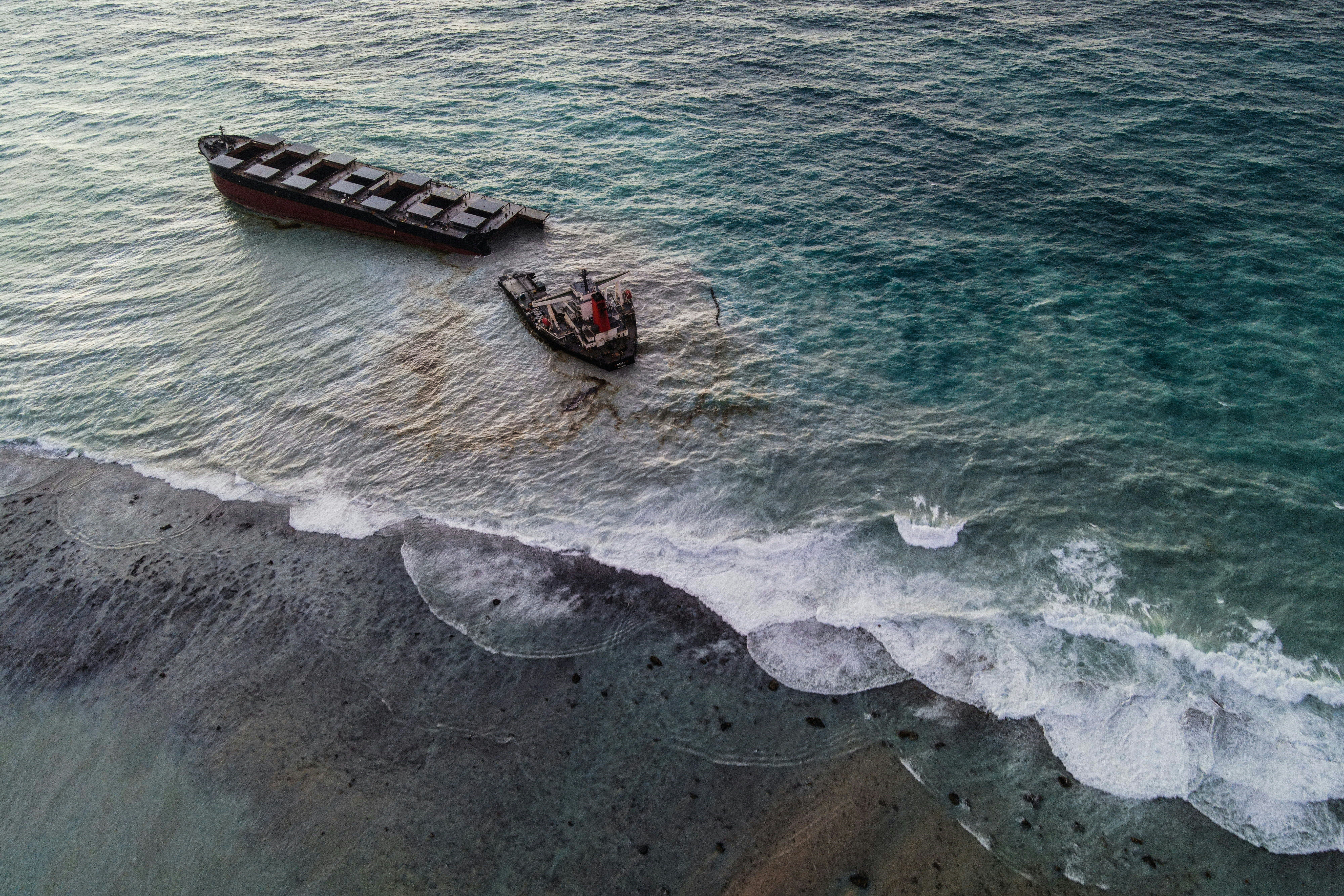 This aerial picture taken on August 16, 2020, shows the MV Wakashio bulk carrier that had run aground and broke into two parts near Blue Bay Marine Park, Mauritius. – A ship that has leaked more than 1,000 tonnes of oil in pristine waters off the Mauritius coast has split into two, its Japanese operator said August 16, 2020. (Photo by STRINGER / AFP)

It has vowed to seek compensation from “the owner and the insurer” of the ship for “all losses and damages” caused by the spill as well as for costs related to the clean-up.

Nagashiki, the owner, has pledged to “sincerely” respond to requests for compensation over damage to the marine environment.

Thousands of Mauritians have volunteered day and night to clean the powder-blue waters that have long been a favourite among honeymooners and tourists.

The spill is both an ecological and economic disaster for Mauritius, which relies heavily on tourism.

As of Saturday night, more than 800 tonnes of oil liquid waste and more than 300 tonnes of solid waste sludge and debris had been removed from the ocean.