MANILA, Philippines — A joint congressional panel has moved closer to concluding discussions on the proposed Bayanihan to Recover as One Act, or the Bayanihan 2 bill, after adopting, among others, two key provisions—a 60-day extension for loan payments during the pandemic and a three-year suspension of permits to build cell phone towers.

The bicameral committee on Friday discarded both the Senate’s proposed 30-day grace period for the payment of all loans, including credit card bills, and the one-year extension in the House version of the bill, according to the office of Sen. Sonny Angara, chair of the finance committee.

Asked to comment on the compromise period, Dominguez on Saturday said: “Maximum of 45 days is better.”

He told a business forum last week that the earlier House measure would “negatively affect the financials of banks and other credit providers, which, in turn, will affect their ability to provide new loans to borrowers or pay interest to their depositors who vastly outnumber their debtors.”

Benjamin Diokno, governor of the Bangko Sentral ng Pilipinas (BSP), said in a statement on Thursday a lengthy grace period could strain the liquidity and capital position of banks.

Any resulting “inability of a bank to service withdrawal may trigger a bank run and will undermine the confidence of the public in the banking system,” he said.

Several private sector economists and the Bankers Association of the Philippines also warned of adverse effects on the financial system and investor confidence from such a measure.

Diokno said the House proposal would limit the availability of credit in the country as banks adopt stricter underwriting standards or completely deny credit to some sectors, including micro, small and medium enterprises.

“Adopting a 365-day moratorium on loan payments will pose serious risks to the soundness of banks and financial stability in general,” he said. “A one-size-fits-all prescription is unwise.”

“A sound banking system is one of the aces in our sleeve,” Diokno said. “It is one of the reasons why the Philippines has received affirmation from credit rating agencies amid 82 sovereign downgrades and 104 outlook revisions from Jan. 1 to June 30 this year.”

Senate Minority Leader Franklin Drilon said that during Friday’s meeting, the bicameral panel also adopted a provision in the Bayanihan 2 bill that suspends for three years most of the permits needed for building new cell towers to improve telecommunications in the country.

Drilon on Saturday said he proposed the suspension of most of the 29 to 35 permits and documentary requirements, except for the building permit.

Telecommunications companies have complained that the numerous requirements, and the delays in their release, hampered the construction of necessary infrastructure to improve connectivity in the country.

Mr. Duterte, in his State of the Nation Address last month, threatened them with expropriation if they failed to improve their services by December.

“With this amendment, we can address this very complex process that hinders the country from being at par with our neighboring countries in terms of internet speed and connectivity,” Drilon said in a statement. 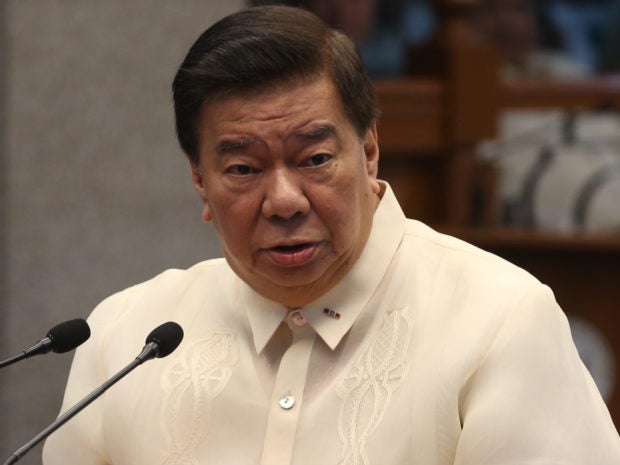 “It is deplorable that the Philippines continues to have one of the slowest internet connections in Southeast Asia and even among Asia-Pacific countries,” he said.

The permits and requirements for the construction of a tower include consent from neighbors, a barangay resolution, zoning and height clearances, radiation evaluation studies, a building permit, a city or municipal resolution, occupancy permit, mayor’s permit and a memorandum of agreement with the Department of Environment and Natural Resources.

Drilon said that if a homeowners’ association refused the construction of cell towers, a referendum supervised by the barangay council could be called to resolve the issue.

He also introduced a provision saying that only the Supreme Court could issue a temporary restraining order or preliminary injunction against the construction of telecommunications infrastructure, including cell sites and towers.

According to him, the three-year suspension of most of the permits would allow the telecommunications companies to speed up the improvement of their infrastructure.

The services they provide have become more crucial amid the pandemic, since many transactions as well as classes are done online given movement restrictions and physical distancing requirements, Drilon said.

Reliable and faster internet connection would help the implementation of the Department of Education’s blended learning strategies, he added.

“Internet today has become a basic commodity. It is a tool that we can utilize for work and education as we deal with the pandemic. Many businesses today are heavily dependent on the internet,” Drilon said.

‘Thank you’ from Jaza

“I cannot tell you how important this is. A very big thank you from all of us in the industry,” he said in a text message to the senator.

Also on Friday, the bicameral committee approved a provision giving a P15,000 cash assistance to health workers who contract mild and moderate COVID-19, and a onetime cash assistance for teachers, teaching personnel, nonteaching personnel in private schools, as well as part-time faculty members of state universities and colleges, who did not receive aid under Bayanihan 1.

The panel also agreed to fund COVID-19 testing and the condonation of loans of agrarian reform beneficiaries.

The Senate bill provides P10 billion to procure supplies for COVID-19 testing and to enhance the capacities of the Department of Health.

The House version provides a P10-billion subsidy to the National Health Insurance Program to cover COVID-19 testing and confinement.