Resolving debate on site of first Mass in PH

Eight months into the official rites for the 500th anniversary of the first Mass in the country, a set of evidence was presented to refute historical accounts that the contingent of world voyager Ferdinand Magellan held the event in Limasawa, Southern Leyte.

Dr. Potenciano Malvar, chair of the Butuan Calagan Historical Cultural Foundation, will assert that the first Mass was held at another site in Mindanao in the soon-to-be-published book, “Site of the 1521 Easter Mass, Butuan Not Limasawa.”

“It is my desire that this manuscript shall initiate the National Historical Commission of the Philippines to unlock and expose the concocted and fabricated published versions of the existing, disputable site of where the Easter Mass continued to be celebrated,” he said in the introduction to the 144-page draft.

Malvar, a 75-year-old doctor, spent five years of research in the country and abroad to help resolve a dispute that a 1959 law, two panels in 1998 and 2009, and several appeals had failed to settle.

“I conclude with complete confidence that it was Butuan,” he told the Inquirer in a recent telephone interview.

According to him, those determining the actual site should first have in mind that the goal of the voyage of the Magellan-led Armada de Moluccas was to reach the Spice Islands using the westward route and trade. 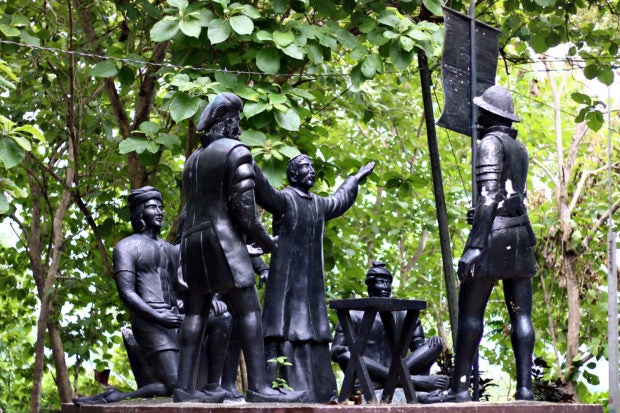 On the order of Spain’s King Charles 1, Magellan, in a 1521 map, “disguised the island of Spice by putting the latitudes at 9 ⅔ degree latitude and cartographed those islands of Mindanao and Visayas by making South, North and East, West.”

The logs of six sailors of the three ships in the expedition also concealed the location of Butuan Island. “Magellan intended them to have contrasting latitude,” Malvar said. “So the 9 ⅔ degree latitude and the purpose of the cartographs were to conceal.”

He said the Limasawa proponents “need to explain why if the 9 ⅔ latitude was that land they wanted to go, why was there a need for Magellan to cartograph those islands that way?”

King Charles’ order on April 19, 1519, read in part: “I know for certain, according to the much information which I have obtained from persons who have seen it by experience, that there are spices in the islands of Maluco; and chiefly, you are going to seek them with this said fleet and my will is that you should straightaway follow the voyage to the said islands in the form and guise which I have said and commanded to you, the said Ferdinand Magallanes.”

A copy of the order is kept in the Archivo General de Indias in Seville, Spain.

Concealment was practiced for centuries by Arab and Chinese traders, Malvar said. An order, dated May 8, 1519, by the Casa Contratacion, also owned by the king, gave Magellan instructions on how to treat and trade with the natives.

Malvar said these negotiations were not known to the chronicler Antonio Pigafetta, who was taught by Magellan to keep secrets after warning that “unauthorized people caught with a chart from his cabinet in the ship faced death.”

The site where Magellan erected a cross with crown was documented by Francisco Albo, who kept an official logbook of the voyage.

It was “upon a mountain,” locating Butuan Island at 9 ⅓ degree North latitude. Later, King Charles referred to this as the proof of his conquest of the Spice Islands. 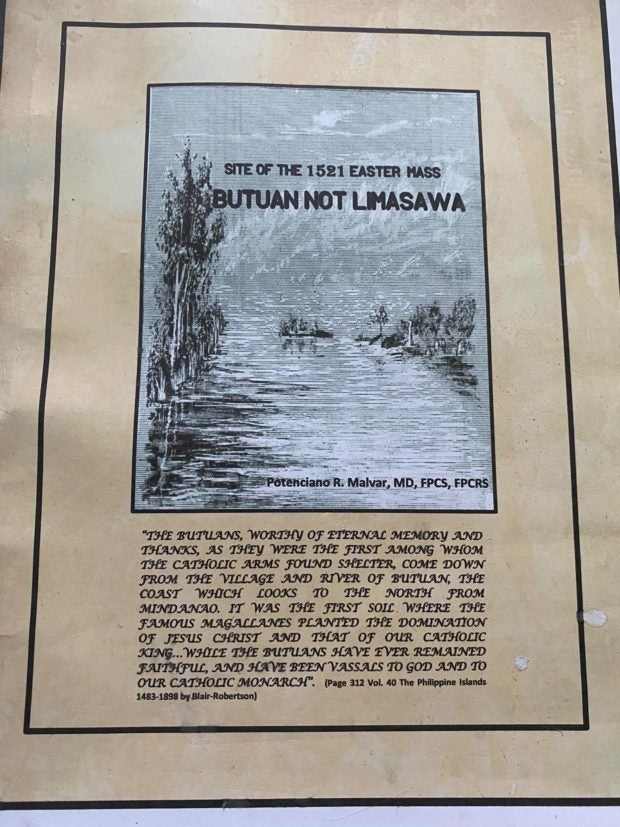 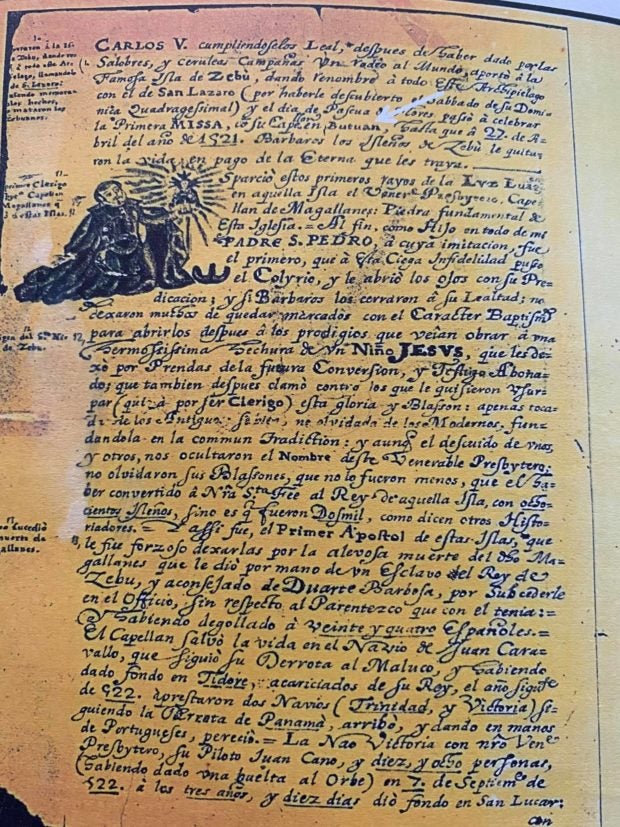 Malvar said Mazaua, an island near Butuan, was replaced with the word Limasawa in the preface of the “First Voyage Around the World” by James Alexander Robertson and Emma Helen Blair that was published in December 1907.

The authentic Pigafetta manuscript has no word Limasawa, Malvar said, attributing the change to a third editor, Edward Gaylord Bourne.

“Limasawa at 9 degree 55’ latitude was very far north of the 9 ⅓ degree North latitude,” he noted to eliminate Limasawa.

Congressional archives of Republic Act No. 2733, the 1959 law that declared Limasawa as official site of the first Mass, showed “many irregularities,” Malvar said.

Of the 39 lawmakers, only 11 were present when the bill was approved.

Proponents, even Church leaders, were not invited to committee hearings. No ocular visits were done. The law did not bear the signature of then President Carlos Garcia.

Malvar also found out that the Gancayco panel, in its 1998 report, deleted six sentences in Pigafetta’s accounts because these would “debunk the Limasawa claim.” The panel was created by the former National Historical Institute in 1996 to resolve issues in the country’s history.

According to Malvar, among the deleted portions was that the Easter Mass happened in the domain of the first king, Raia Colambu, which was Butuan. Magellan’s setting up of tokens —cross and crown—was deleted although this confirmed the conquest. The items were not found though to this date.

The “bull’s eye” against Limasawa was the three actions that Pigafetta recounted but were deleted in the Gancayco report: “The ships fired all their artillery at once when the body of Christ was elevated, the signal having been [given] from the shore with muskets.”

These, Malvar said, could not be done all at the same time in Limasawa because Magellan’s shrine and landing are 700 meters apart.

He said “Conquistas de las Islas Filipinas 1565-1615,” a chronicle of Miguel Lopez de Legazpi’s expedition by Gaspar de San Agustin, extolled the exploits of Magellan in Butuan, 44 years after the explorer was killed in Mactan.

“[The natives and king] built him a house and during Easter, the First Mass celebrated [on] these islands was held in Butuan and the First Cross was raised, which Ferdinand Magellan himself placed on a hill not very far from the beach … ”

The same chronicle mentioned Butuan, describing it thus: “That on Masagua there was a town located to the east with a port for the ships on the west side of the island.” 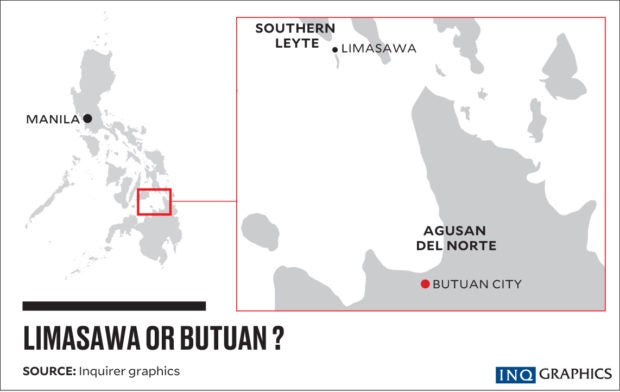 Malvar said the evidence that Mazaua Island existed was a 1683 map by Augustinian Recolletos. The island disappeared in a 1902 map because earthquakes had fused it with the mainland while siltation by floods filled it. The present day Mazaua is thought to be Barangay Masao, one of the 85 villages of Butuan City.

Using a 1739 map, Malvar tracked Pigafetta’s distance of 35 leguas (legua is an obsolete unit of length; 1 legua is equivalent to 3 miles, or 4.84 kilometers) from Mazaua to Gatigan to Zzubu. The distance between Limasawa and Zzubu was less than 20 leguas, however.

Malvar twice doubted if Limasawa could supply spice, citing the large haul of the ship Victoria when it returned to Spain. Also, the tadpole shape of Limasawa contrasted Pigafetta’s cartograph of Mazaua Island.

Jesuit priest Rey Pedro Chirino’s “Relaciones de las Islas Filipinas” mentioned the missionary activities of the Jesuits from 1581 and the Recolletos in 1622 in Butuan. Books by five missionaries dated 1663, 1667, 1787 and 1818 chronicled the growth and forms of Catholic faith in Butuan.

Then, too, the first bishop of Manila, Domingo de Salazar, issued an edict in 1581 declaring “El Capella Butuan” the site where the Easter Mass was celebrated on March 31, 1521.

The edict was published in a special newspaper supplement published in 1926, a copy of which is in the archives of the Archdiocese of Manila.

In Butuan, there was also a group called “Folks of Magallanes” that celebrated the Easter Mass for 300 years until 2000 at the Carballo Monument. The date of the Mass was on April 8, 1521, following the Gregorian calendar.