Pompeo inks deal for US troop move from Germany to Poland 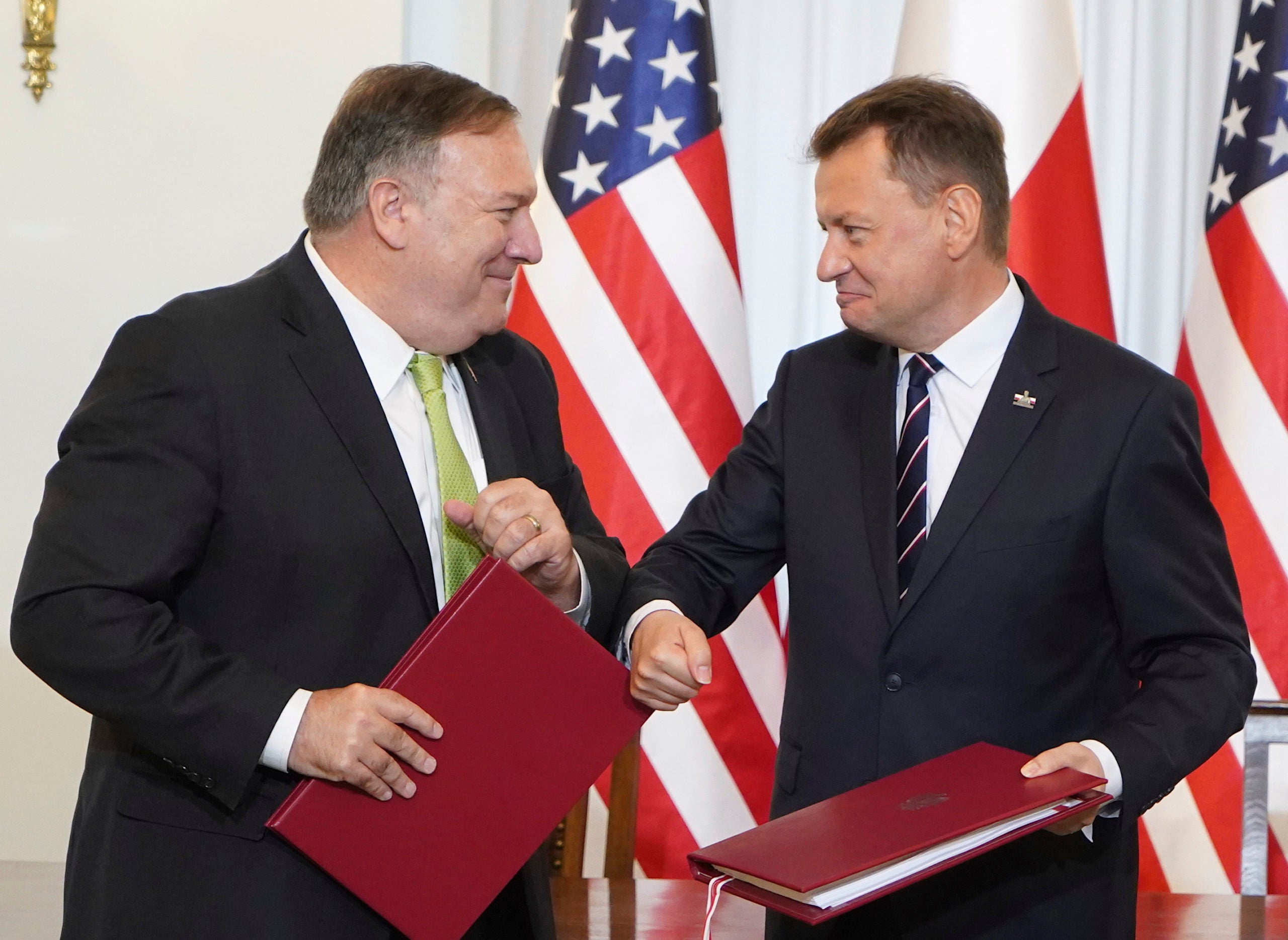 US Secretary of State Mike Pompeo left, and Poland’s Minister of Defence Mariusz Blaszczak greet each other after signing the US-Poland Enhanced Defence Cooperation Agreement in the Presidential Palace in Warsaw, Poland, Saturday, Aug. 15, 2020. Pompeo is on a five-day visit to central Europe. (Janek Skarzynski/Pool via AP)

WARSAW  — U.S. Secretary of State Mike Pompeo on Saturday sealed a defense cooperation deal with Polish officials that will pave the way for the redeployment of American troops from Germany to Poland.

In Warsaw at the end of a four-nation tour of central and eastern Europe, Pompeo and Polish Defense Minister Mariusz Błaszczak signed an Enhanced Defense Cooperation Agreement that sets out the legal framework for the additional troop presence.

“This is going to be an extended guarantee: a guarantee that in case of a threat our soldiers are going to stand arm-in-arm,” Poland’s President Andrzej Duda said during the signing ceremony.

“It will also serve to increase the security of other countries in our part of Europe,” Duda said.

The deal would also further other aspects of U.S.-Polish cooperation, he added, citing primarily investment and trade ties.

The pact supplements an existing NATO Status of Forces Agreement and allows for the enhancement and modernization of existing capabilities and facilities by allowing U.S. forces to access additional Polish military installations. It also sets out a formula for sharing the logistical and infrastructure costs of an expanded U.S. presence in the country.

President Donald Trump said in a statement that the pact was the culmination of months of negotiations with Poland.

Some 4,500 U.S. troops are currently based in Poland, but about 1,000 more are to be added, under a bilateral decision announced last year. Last month, in line with Trump’s demand, to reduce troop numbers in Germany, the Pentagon announced that some 12,000 troops would be withdrawn from Germany with about 5,600 moving to other countries in Europe, including Poland.

In addition, several U.S. military commands will be moved out of Germany, including the U.S. Army V Corps overseas headquarters that will relocate to Poland next year.

Trump has long and loudly complained that Germany does not spend enough on defense and has repeatedly accused Germany of failing to pay NATO bills, which is a misstatement of the issue. NATO nations have pledged to dedicate 2% of their gross domestic product.

After the signing ceremony, Pompeo joined Duda and other Polish leaders at the Tomb of the Unknown Soldier to mark the centennial of Poland’s landmark victory against the Russian Bolsheviks in 1920 during the Polish-Soviet war.

In the Battle of Warsaw, often called the “Miracle on the Vistula,” outnumbered Polish troops led by Marshal Jozef Pilsudski defeated an advancing Red Army. The battle is credited with stopping the Bolsheviks’ westward march and remains a source of huge national pride in Poland.

Saturday’s signing came just a day after the Trump administration suffered an embarrassing diplomatic loss at the United Nations when its proposal to indefinitely extend an arms embargo on Iran was soundly defeated in a UN Security Council vote that saw only one countryside with the U.S. Pompeo will visit that country, the Dominican Republic, on Sunday for the inauguration of its new president.

Pompeo has used his Europe trip to warn the region’s young democracies about threats posed by Russia and China and has received a warm welcome. In Poland, the reception was particularly kind given the friendship between Trump and conservative Polish President Duda, who was sworn in for a second five-year term earlier this month after a hotly contested election.

Many of Duda’s Law and Justice party’s policies have put Poland at odds with the European Union, which is concerned that government efforts to reshape the judiciary and other actions have eroded the rule of law and democracy in the EU member country.