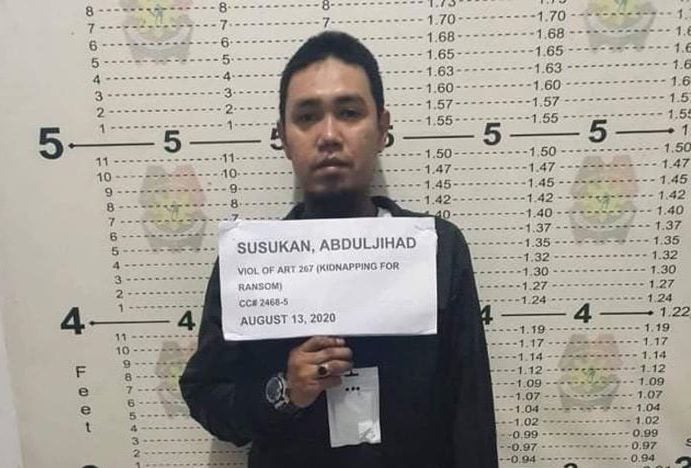 “We thank Chairman Nur Misuari for facilitating the negotiation between the PNP headed by Police Col. Kirby John Kraft, Davao City Director, and Edang Susukan,” Gamboa said in a statement.

Gamboa said Misuari’s hand over of the Abu Sayyaf leader to police took place at the MNLF chairman’s house located in a subdivision in Davao City.

Law enforcers initiated the negotiation after receiving information that Susukan was brought to Davao City for medical treatment, Gamboa said. Police did not mention the illness of Susukan.

Prior to the negotiation, Gamboa said the PNP also advised Davao Mayor Sara Duterte, who offered her assistance to allow the Abu Sayyaf leader’s turnover to authorities.

“The PNP immediately advised Mayor Inday Sara Duterte who assured us of her full cooperation and assistance, to ensure the peaceful handover and orderly transfer of custody to proper authorities,” the PNP chief said.

Gamboa said Susukan will first undertake a medical check-up at Camp Quintin Merecido Hospital in Davao. Susukan will then be transferred to the Armed Forces of the Philippines Headquarters in Camp Aguinaldo, Quezon City.

Susukan is wanted in the Philippines and Malaysia for kidnappings in the east coast of Sabah since 2013 and other crimes in Jolo Island in Sulu.

But a report from the region said police in Davao City arrested Susukan on Thursday evening.

A police mugshot indicated that Susukan was arrested for a charge of kidnapping for ransom.

According to intelligence sources, Susukan was flown to Davao City from the Jolo airport in Sulu on August 10. He was reportedly with Misuari.

Citing intelligence sources, Malaysia’s The Star newspaper reported that Susukan was brought to Davao City so he can be fitted with a prosthetic replacement for his left arm that he lost in an armed encounter with government troops.

Read Next
PH military unaware Abu Sayyaf leader Susukan was in Davao City, Lorenzana says
EDITORS' PICK
vivo brings to the Philippines a powerful smartphone with a slimmer body, the vivo Y02s for only PHP 6,499
Palace: Biggest supermarkets in PH commit to sell sugar at P70 per kilo
What to watch out for when selecting a video surveillance solution
Heads may roll at BOC, says Palace if sugar smugglers are allowed to use recycled import permits
House energy committee chair Arroyo bats for cheap electricity
DOH reports increase in daily COVID-19 deaths, mostly unvaxxed
MOST READ
Metro Manila’s No. 1 wanted man arrested, says NCRPO
DepEd to give teachers P5K cash allowance within first week of classes
Jordan Clarkson arrives in Manila to bolster Gilas Pilipinas
Brian Poe-Llamanzares receives his PhD in Public Administration
Don't miss out on the latest news and information.