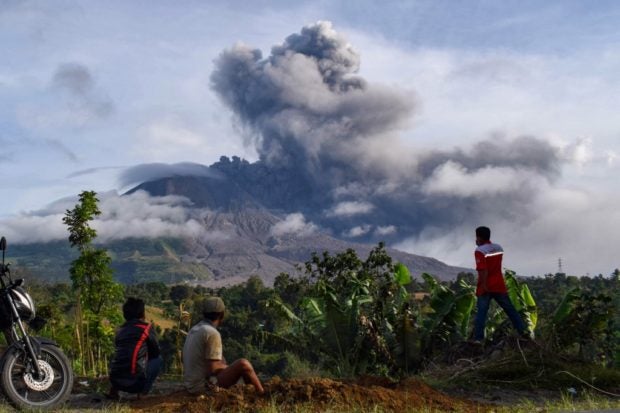 Villagers watch the eruption of Mount Sinabung as seen from Karo, North Sumatra on August 13, 2020.  Indonesia’s Mount Sinabung erupted again on August 13 with a string of blasts that sent plumes of ash two kilometers into sky, triggering a flight warning and fears of lava flows. Photo by ANTO SEMBIRING / AFP

JAKARTA — Indonesia’s Mount Sinabung erupted again Thursday with a string of blasts that sent plumes of ash two kilometers (1.2 miles) into the sky, triggering a flight warning and fears of lava flows.

The activity marked at least the eighth time that the rumbling volcano on Sumatra island has erupted in less than a week, although there were no injures or major damage reported.

Authorities issued a warning to planes flying near the volcano which last saw a deadly eruption in 2016.

“There is potential for more eruptions and airlines are aked to be on alert,” said National Disaster Mitigation Agency spokesman Raditya Jati.

The crater’s alert status remained at the second-highest level.

Jati said authorities had marked a five-kilometer no-go-zone around Sinabung and warned of possible lava flows.

“Locals are advised to wear face masks if they leave their homes to guard against the health effects of volcanic ash on health,” he added.

On Monday, Sinabung belched a tower of smoke and ash some five kilometres high, coating local communities in a thick layer of debris, after eruptions at the weekend.

Sinabung roared back to life in 2010 for the first time in 400 years. After another period of inactivity it erupted once more in 2013, and has remained highly active since.

In late 2018, a volcano in the strait between Java and Sumatra islands erupted, causing an underwater landslide and tsunami that killed more than 400 people.

Indonesia is home to about 130 active volcanoes due to its position on the “Ring of Fire,” a belt of tectonic plate boundaries encircling the Pacific Ocean where frequent seismic activity occurs.