Chinese foreign ministry calls on US to stop exchanges with Taiwan 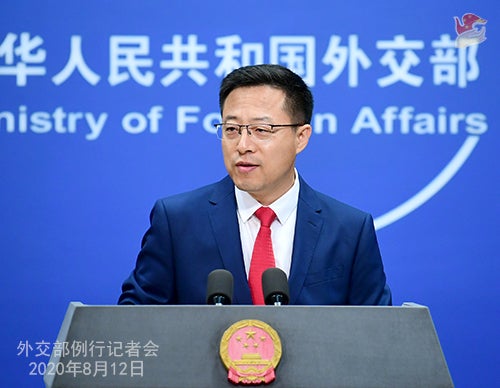 BEIJING — China warned some United States officials on Wednesday not to have illusions on issues concerning China’s core interests after US Secretary of Health and Human Services Alex Azar’s visit to Taiwan, and urged him to stop criticizing China’s anti-pandemic efforts.

Despite China’s opposition, Azar finished his three-day visit to the Taiwan region on Wednesday, during which he met with Taiwan leader Tsai Ing-wen and signed a memorandum of understanding on health cooperation with the island. In a speech during his controversial visit, Azar claimed that China did not alert other countries about the coronavirus or work with the world on battling the virus.

Foreign Ministry spokesman Zhao Lijian said at a daily news conference that China firmly opposes official exchanges between the US and Taiwan under any pretext, and those who play with fire will get burned.

The spokesman warned the Democratic Progressive Party authorities not to go further down the wrong path, saying that being a puppet of and relying on other countries and seeking “independence” under the pretext of the pandemic will only lead to a dead end.

Ma Xiaoguang, spokesman for the Taiwan Affairs Office of the State Council, said that China opposes Azar’s visit to Taiwan, which violated the one-China principle as well as the three China-US joint communiques.

The move by the DPP authorities to hype up his visit is a farce, Ma said.

In response to Azar’s remarks on China’s handling of the pandemic, Zhao said, “We don’t know how he can be so unabashed to blatantly criticize China’s anti-pandemic efforts,” and urged him to focus on saving the lives of US people.

Despite the severe pandemic situation in the US, the US health secretary ignored the millions of Americans who suffered from the disease, and went to Taiwan to “put on a political show” instead of staying on the front line of the fight against COVID-19 to contain the pandemic in his own country, Zhao said.

“His behavior again proved that in the eyes of some US officials, the lives of the American people mean nothing when compared to their selfish political gains,” he said.