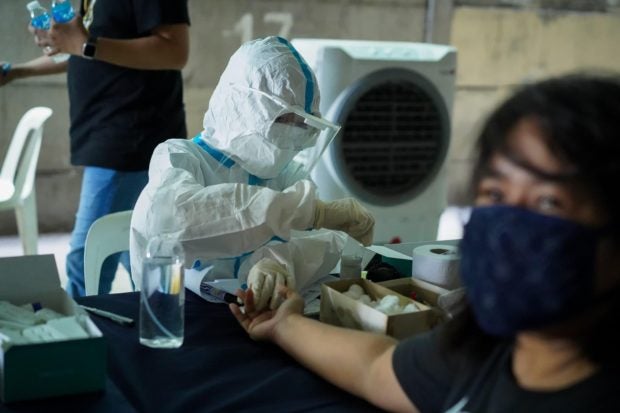 CONTAINING SPREAD The city government of Imus in Cavite uses the cheaper rapid antibody test kits side by side with the confirmatory RT-PCR test to trace COVID-19-infected residents and contain the spread of the virus. —PHOTO COURTESY OF IMUS CITY GOVERNMENT

SAN PEDRO CITY, Laguna, Philippines — Some laboratories testing patients for the virus causing the new coronavirus disease (COVID-19) in Calabarzon (Cavite, Laguna, Batangas, Rizal and Quezon) region have yet to claim reimbursements from Philippine Health Insurance Corp. (PhilHealth) amounting to millions of pesos, adding burden to an already overwhelmed and cash-drained health-care system on the ground.

Other laboratories in Calabarzon, like the one at the University of the Philippines Los Baños (UPLB) in Laguna, also have yet to claim reimbursements, said Dr. Eduardo Janairo, the Department of Health (DOH) regional director.

Delays in PhilHealth reimbursements have become a problem for the laboratories, according to Janairo.

“Some labs have scaled down [their testing] by accepting only [the specimens of] paying [patients]. We’ve heard complaints, too, about labs refusing [to test PhilHealth cases], while others prefer not to be accredited by PhilHealth dahil ’di nababayaran (because they are not being paid),” Janairo said.

Imus City, which paid for the molecular laboratory it set up at its hospital, conducts RT-PCR tests at an average of 900 a day on samples collected locally, from the adjacent city of Bacoor and from as far as Quezon province.

The presumption was that PhilHealth would reimburse the hospital for the cost of the RT-PCR tests but the city government had yet to collect any payment since the laboratory began operating in early June, Maliksi said.

He said the city was forced to “carry the burden” of acquiring the RT-PCR test kits and paying for tests of PhilHealth members—at P3,490 each—when the city government funds could have been allotted for other efforts, like increasing the contact tracing of probable virus cases and speeding up the encoding of laboratory results into the DOH system.

The test of a non-PhilHealth member costs about P4,000. “That’s why I feel bad when we hear about all these billions of pesos of PhilHealth,” Maliksi said, referring to issues that some PhilHealth officials had pocketed P15 billion of insurance money.

The state health insurer is in the middle of investigation by Congress over alleged overpriced equipment and irregularities in the disbursements of funds.

“If this went on, we might have to accept only the paying (patients or non-PhilHealth members),” Maliksi said.

As of Tuesday, Calabarzon recorded 10,245 cases, of which 6,475 were active. There are 10 molecular laboratories in the region, while the accreditation of 10 others is still pending.

Janairo said the DOH would allocate P3.5 million of DOH fund to Ospital ng Imus so it could keep on testing PhilHealth members, while waiting for the refund.

UPLB vice chancellor Rex Demafelis said the university would file its claim for reimbursements with PhilHealth but noted that the amount was “not much” since the laboratory opened only in July.