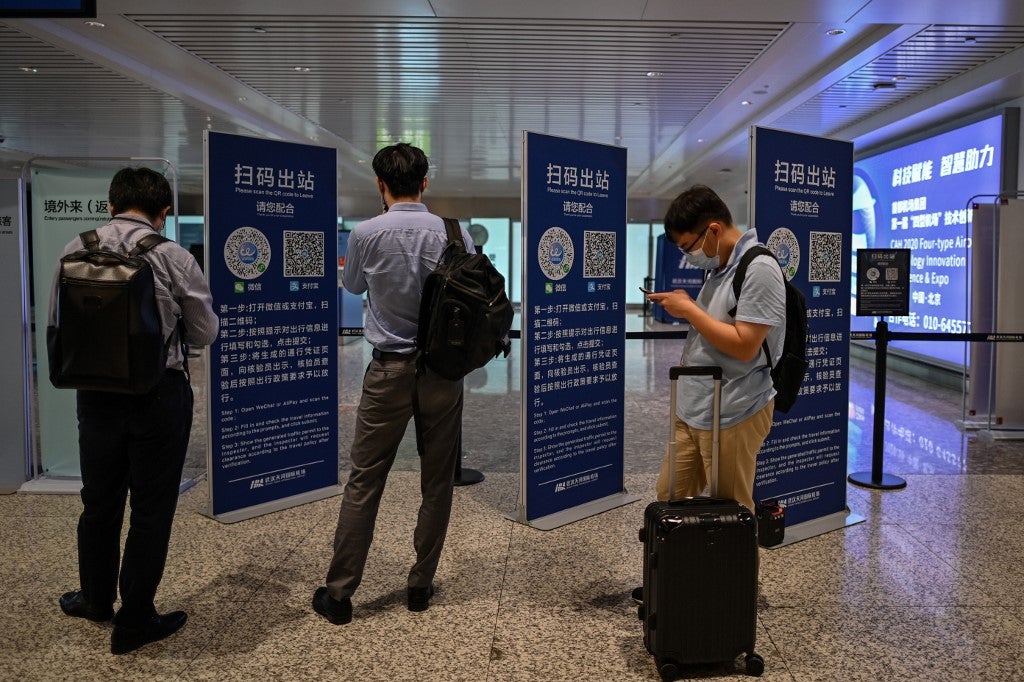 This photo taken on August 3, 2020 shows passengers checking their health codes on their phones upon arrival at Tianhe Airport in Wuhan in China. (Photo by Hector RETAMAL / AFP)

BEIJING — China has eased entry restrictions for nationals from 36 European countries, months after thousands were left stranded when the country closed its borders and slashed flights to slow the spread of the coronavirus.

Almost all foreign nationals were forbidden from entering the country when Beijing imposed the measures in March, even those with Chinese work or residence permits or family living in the country.

But this week China said it would relax some of the bureaucratic requirements for Europeans hoping to re-enter.

The new rules will allow European passport holders from 36 countries –- including France, Germany and the UK -– with a valid residence permit to apply for a Chinese visa without an invitation letter, according to a notice by the Chinese embassy in Berlin published Wednesday.

Everyone returning to China has to reapply for their visa, since travel documents issued before the pandemic have been nullified.

Previously, China had allowed only a small number of skilled foreign workers to return with special official invitation letters — a process which proved slow.

China’s foreign ministry said in a statement published Monday that European passport holders who qualify will now be allowed to “apply for a Chinese visa free of charge”.

Anyone coming from abroad is still subject to COVID-19 tests and a 14-day quarantine — and will still have to find a plane ticket, after Beijing ordered a drastic reduction in international air links at the end of March, and prices soared.

Some of these strict flight quotas are also being lifted, with Air France allowed to operate three weekly flights between China and France from the end of August.

China has largely brought the spread of COVID-19 under control after the disease first emerged there late last year, but there has been a series of local clusters in recent months.