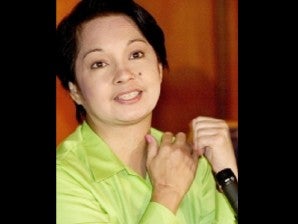 Arroyo, now a Pampanga representative, and Gonzalez submitted their separate opposition letters to the Judicial and Bar Council on Monday, the last day of filing of opposition against nominees to the post vacated by resigned Ombudsman Merceditas Gutierrez.

In her two-page opposition letter, Mrs. Arroyo, now Pampanga Congresswoman said, “If appointed Ombudsman, I sincerely believe that Justice Conchita Carpio-Morales would not have the required “independence” and impartiality in resolving cases involving me and my immediate family.”

Arroyo said the creation of the Truth Commission and the efforts to remove Ombudsman Merceditas Gutierrez, which was aborted by her resignation, would make her “a principal target of complaints which would be filed before the Ombudsman.”

Arroyo said that being member of the Supreme Court, Morales always voted in favor of acts or moves to investigate graft and corruption cases allegedly committed during her administration.

“While her views did not generally prevail because the Supreme Court is a collegiate court composed of a Chief Justice and 14 Associate Justices, Ombudsman would be acting alone in the performance of his responsibilities,” Arroyo said.

“I trust that the Judicial and Bar Council will have no difficulty identifying applicants who possess the required ‘probity and independence’ to act on cases brought before the Ombudsman, including those against myself, my immediate family and others who served in my administration,” Mrs. Arroyo said.

Morales, who will be retiring from the high court on June 19, had dissented in major Supreme Court rulings favoring Arroyo and her Cabinet members, including the bid of Arroyo’s House allies to prevent the impeachment proceedings against Gutierrez.

In his letter, Gonzalez pointed out that the Constitution “requires that only a person of probity and independence must be appointed to the position of Ombudsman.”

“Based on my personal knowledge and observation, the aforesaid applicants miserably failed to meet such requirements and, hence, must not be considered for such position,” Gonzalez said.

According to Gonzalez, he once investigated Chavez for buying firearms using public funds for his own personal use when he was still the Tanodbayan during the incumbency of the late President Corazon Aquino.

He said that Chavez at the time was the solicitor general and was frequenting Switzerland to help the government recover the Marcoses’ ill-gotten wealth.

“However, due to the fact that I was suspended by the Supreme Court, which forced me to leave office, I was not able to pursue my investigation of Chavez,” Gonzalez said.

He also claimed that Chavez was facing disbarment cases before the Commission on Bar Discipline of the Integrated Bar of the Philippines which “should make him unfit to become the next Ombudsman whose probity, integrity and morality must be beyond question.”

The Judicial and Bar Council (JBC) has recently scheduled the public interview of the 27 candidates to the Ombudsman post, which was vacated by Ombudsman Merceditas Gutierrez when she resigned last May 6. Morales is scheduled for interview on June 23.

On July 4, the JBC is set to vote on the shortlist and prepare the list of nominees to be submitted to President Benigno C. Aquino III. Pursuant to Section 9, Article XI of the 1987 Constitution, “The Ombudsman shall be appointed by the President from a list of three nominees…” Section 9 also provides that President Aquino has until August 6, or “three months after (the vacancy) occur(s),” to choose.

Under Section 8 (3), RA 6770, “In case of vacancy in the Office of the Ombudsman due to… resignation…. the Overall Deputy shall serve as Acting Ombudsman in a concurrent capacity until a new Ombudsman shall have been appointed for a full term.”