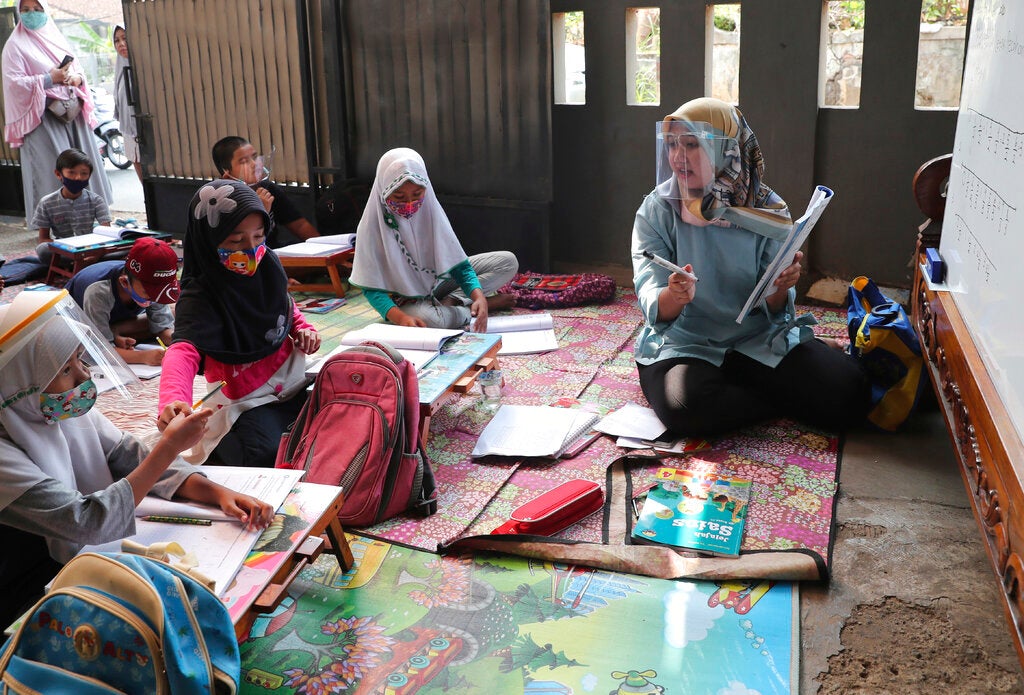 Teacher Inggit Andini, right, wearing a face shield as a precaution against the coronavirus outbreak, speaks as her students in a makeshift classroom at her residence in Tangerang, Indonesia, Monday, Aug. 10, 2020. Andini offered free extra lessons for students who lack access to the internet as the school where she works at remain closed and switched to online learning due to the outbreak. (AP)

It took six months for the world to reach 10 million confirmed cases of the coronavirus. It took just over six weeks for that number to double.

The worldwide count of known COVID-19 infections climbed past 20 million on Monday, with more than half of them from just three countries: the U.S., India and Brazil, according to the tally kept by Johns Hopkins University.

In other developments Tuesday:

The severe and sustained crisis in the U.S. — over 5 million cases and 163,000 deaths, easily the highest totals of any country — has dismayed and surprised many around the world, given the nation’s vaunted scientific ingenuity and the head start it had over Europe and Asia to prepare.

South Africa, Colombia, Mexico, Peru, Argentina, Russia and the Philippines round out the list of the top 10 countries contributing the most new cases to the global tally since July 22, according to an Associated Press analysis of Johns Hopkins data through Monday.

The real number of people infected by the virus around the world is believed to be much higher — perhaps 10 times higher in the U.S., according to the Centers for Disease Control and Prevention — given testing limitations and the many mild cases that have gone unreported or unrecognized.

Some of the worst-hit nations have been those whose leaders have downplayed the severity of COVID-19, undercut the advice of health experts and pushed unproven remedies.

President Donald Trump, Brazil’s President Jair Bolsonaro and Mexican President Andrés Manuel López Obrador, for example, all rarely wear masks and have resisted calls for strict lockdowns. Trump and Bolsonaro have promoted the anti-malaria drug hydroxychloroquine, even though studies have shown it to be useless against the virus, with potentially deadly side effects.

In the U.S., Mexico and Brazil, testing has been criticized as inadequate. While the U.S. has ramped up testing in recent months, Americans have faced discouragingly long lines and delays in getting the results. In Mexico, 47% of tests are coming back positive, suggesting that only seriously ill people are getting screened.

Contact tracing, which has helped authorities in other countries get a handle on the spread, has also been criticized as insufficient in all three countries.

The U.S., with about 4% of the world’s population, accounts for about 25% of the known coronavirus infections and 22% of the deaths.

Mexico has reported nearly 500,000 cases and more than 50,300 deaths, but the president’s point man on the epidemic, Assistant Health Secretary Hugo López-Gatell, said a full lockdown would prove too costly for people with little savings and tenuous daily incomes.

“We do not want a solution that would, in social terms, be more costly than the disease itself,” he said.

Cases have begun to rise significantly in Caracas, Venezuela, perhaps one of the world’s least-prepared cities to face the pandemic.

The country has been under a lockdown since March, but limited testing, open defiance of quarantine measures and the return of tens of thousands of Venezuelan migrants from countries with higher caseloads have resulted in a steady expansion that is starting to overwhelm hospitals with scarce supplies.

“What has been successful in other countries is massive testing and isolating the population that is sick,” said Domingo Subero, 66, an engineer worried about the situation in Caracas. “Here, neither of those two things is happening.”

Elsewhere around the world, New Zealand, which has been praised for quickly getting the virus under control, reported the first cases of local transmission in the country in 102 days. Prime Minister Jacinda Ardern said four cases were discovered in a single Auckland household.