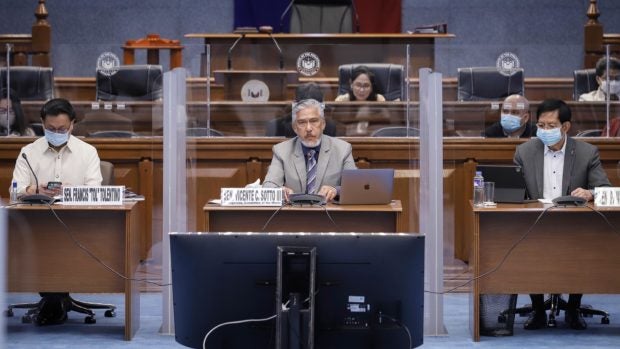 PhilHealth inquiry: Senate President Vicente C. Sotto III on Tuesday, August 11, 2020, moves for the resumption of the second hearing of the Committee of the Whole on the Senate resolutions calling for an inquiry in aid of legislation the reported widespread corruption and mismanagement in the PhilHealth. Also in photo are (left) Sen. Francis “Tol” Tolentino and (right) Sen. Panfilo Lacson. (Joseph Vidal/Senate PRIB)

MANILA, Philippines— Weeks before it approved the guidelines for the use of special funds for the government’s COVID-19 response, Philippine Health Insurance Corp. (PhilHealth) had already handed out P9.3 billion in cash advances to various hospitals, especially favored health facilities, Sen. Panfilo Lacson disclosed on Tuesday.

At the resumption of the Senate hearing on the corruption scandal hounding the state-run health insurer, PhilHealth officials said a hospital in Davao City was the biggest recipient of funds from the P30-billion Interim Reimbursement Mechanism (IRM).

Another hospital in Davao region, Davao Regional Medical Center in Tagum City, ranked third, getting P209 million. Lacson, Senate President Vicente Sotto III and other senators pounced on the questionable distribution of the IRM allocations, which were specifically allocated for hospitals treating patients infected with the new coronavirus.

Lacson said a review of PhilHealth records showed a “pattern” that some hospitals, particularly private-owned, were favored in the distribution of IRM over state-owned hospitals. For example, he said Eastern Samar Gov. Ben Evardone had been complaining about the delay in the reimbursement of P24 million in benefit claims of at least 10 district hospitals in the province.

“There’s a pattern here. Why is this happening? There seems to be favoritism in choosing… private hospitals receiving IRM funds,” Lacson said.

Sen. Joel Villanueva said the swift release of P45 million in cash advances to B. Braun Avitum Philippines despite the dialysis center’s pending cases in PhilHealth proved that the health insurer had given preferential treatment to certain health facilities.

“I don’t think there’s any doubt that there’s favoritism in PhilHealth,” Villanueva said.

“IRM has now become ‘Inequitable Reimbursement Mechanism.’ It’s being used by PhilHealth to the advantage of some ‘blessed’ (hospitals),” he said during the nine-hour hearing.

Lacson said records showed that B. Braun was not even registered with the Securities and Exchange Commission.

“Are you not conducting due diligence? You are releasing millions of pesos,” Lacson said. “You made advance payments to B. Braun, which is charging their patients for dialysis. So where did the money that you gave go?”

Thorrsson Montes Keith, who had resigned as PhilHealth antifraud legal officer, said he suspected PhilHealth Senior Vice President Rodolfo del Rosario actually owned B. Braun, based on the deposits made to a rural bank in Balanga, Bataan province, which the PhilHealth official allegedly frequented.

Senate Minority Leader Franklin Drilon also lamented that the requests for IRM funds of 33 hospitals in his home region of Western Visayas, regarded as the bailiwick of the opposition Liberal Party, had not been granted by PhilHealth since April 6.

“Up to this point, not a single peso was released to these 33 hospitals,” Drilon said. But Robert Labe Jr., PhilHealth corporate counsel, insisted that all the IRM releases were consistent with PhilHealth’s existing regulations.

“The IRM is not provided arbitrarily. There is a process being followed,” he said.

Sotto, who spearheaded the investigation along with Lacson, asked PhilHealth President and CEO Ricardo Morales about the legal basis of the IRM that would justify the distribution of billions of pesos in cash advances to public and private health facilities.

Morales, who joined the hearing via the internet, said Republic Act No. 7875, the law that created PhilHealth, allowed it to “supervise the provision of health benefits… and set standards, rules and regulations necessary to ensure quality” of health care in the country.

But Sotto said the concept of “payment mechanism” as stated in the law was different from “financial mechanism” that the PhilHealth board cited in creating IRM.

“Does PhilHealth have the power to finance any (hospital)? That’s not included in your mandate, right?” Sotto asked the PhilHealth chief. Morales agreed, adding that the corporation’s authority was to pay for health services.

Morales claimed that the PhilHealth board had started discussions on crafting IRM as early as January in anticipation of the effects of COVID-19.

“We were in the state of anxiety (then) because we knew COVID-19 was coming,” Morales said. “We wanted to take preemptive measures to be able to prepare our hospitals to respond to this pandemic.”

Lacson and Drilon took Morales to task for claiming that PhilHealth came up with the idea about the IRM in January. Drilon pointed out that Health Secretary Francisco Duque III was telling the public in early March that there was no need for the public to worry.

PhilHealth board member Alejandro Cabading and Dr. Susan Mercado, who recently resigned from the board, denied Morales’ statement.

“As far as I can recall, we were not talking about COVID-19 (that time),” Mercado said, adding that it was not the board that initially allotted P27 billion for IRM.

Replying to Lacson’s queries, Mercado said the PhilHealth board was just “informed and asked to endorse” PhilHealth Circular No. 2020-0007, which Morales supposedly signed on March 20.

Antedated resolution At the time, Lacson said, official PhilHealth records showed that the company had already released P703 million. Showing another set of documents, the senator said the resolution was “antedated,” as it was finalized only on April 22, or more than a month after the health insurance started disbursing IRM funds.

Lacson said PhilHealth’s IRM distribution had already ballooned to P9.3 billion by then. Worse, PhilHealth adopted only on March 31 Board Resolution No. 2515, which was needed to justify the March 20 circular, according to the senator.

“So what were the guidelines (used by) the regional vice presidents in issuing IRM when the guidelines, called the SOP (standard operating procedures), were issued only after (the funds had been distributed)?” Lacson asked.

In response, Morales explained: “In the administration of our efforts, there were some expedients that had to be adopted because we did not know the possible impact of COVID-19.”

“We had to immediately release the funds. But we made sure that all the releases were covered by a contract and that we would be able to account for all the funds that were (made) available,” he added.

Lacson wondered why the cart came before the horse. “The (board) resolution is the one which should pull the cart,” he told Morales.

Senate Majority Leader Juan Miguel Zubiri said PhilHealth investigators had informed him that many unscrupulous hospitals were not only involved in “upcasing” of treatments, but were also behind the “nonexistent patients” and rebates schemes.

Zubiri said these hospitals were allegedly paying individuals P1,000 each for “acting” as patients, who were entitled to reimbursements from the health insurer. “Some (hospitals) pay people P1,000 to act as patients in order to (collect benefit) claims for more serious ailments from PhilHealth,” he said.Phi