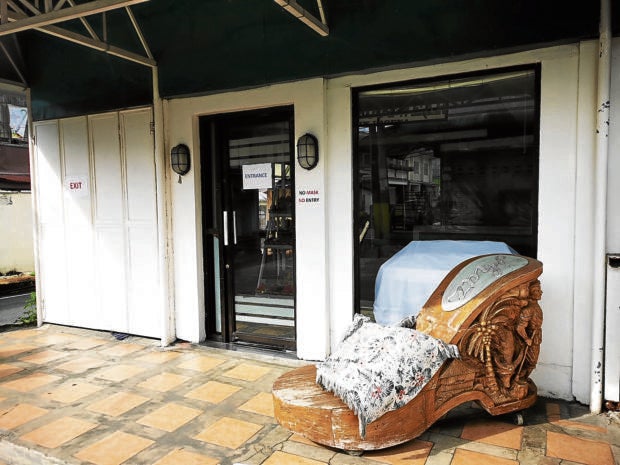 SYMBOL A giant wooden shoe welcomes customers to one of the stores in Liliw, where locals produce cheap but durable footwear. —CLIFFORD NUÑEZ

LILIW, Laguna, Philippines — Tourists are absent on Gat Tayaw, the popular stretch of “tsinelas” (footwear) stores in this town, that normally welcomes huge crowds, especially during the annual Tsinelas Festival held every April.

Instead, stores are shut, except for a few that kept their roll-up doors half-open in case a customer, with good enough reasons to move around the checkpoints, walks in and decides to pick up a pair or two.

“We’re just lucky we own this place so we don’t worry about the rent. But others, like those around the corner, had to close down [to save on] overhead [costs],” said Julieta Loma, a footwear store owner.

To cut the cost of hiring a salesperson, Loma manned the store herself since the new coronavirus disease (COVID-19) pandemic triggered a domino effect of canceled festivals, tourism slump and deferred orders from abroad.

She, too, had to let go a couple of people employed in her small factory of 15.

Loma has been running the business she inherited from her parents in 2007.

There are about 200 backyard manufacturers and retailers, each employing 10 to 50 people in the cottage industry that generates about 20 percent of the local government’s income, according to tourism and municipal administrator Mary Maileen Sulibit.

Liliw’s footwear-making traces its steps back to between 1930 and 1940, the very first store opened by Casiano Pisueña, who made use of “tistis” (coconut spathe) and rubber-tire interiors for a pair of slippers.Pisueña’s store, named “Dimasira” (from the phrase “hindi masira,” or indestructible), gave Liliw the brand of selling “cheap” (current price starts at P200) but “durable” footwear.“That’s why we are really concerned about [the footwear makers]. Our goal is to keep the industry alive through this pandemic,” Sulibit said.

Made with locally sourced materials, Liliw’s products were exported to as far as Japan, China, Vietnam, Papua New Guinea, Europe and the United States.Locally, manufacturers catered to department stores that placed orders for hundreds of pairs, until malls were shut and shopping was restricted because of the virus. 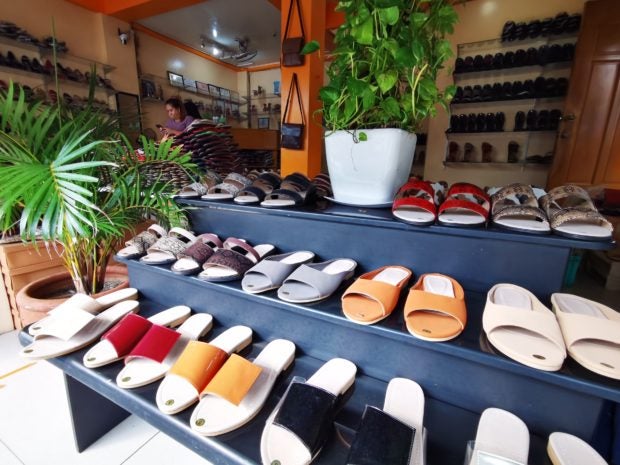 NO TAKERS The few footwear stores still open in Liliw town, Laguna province, are struggling to stay afloat with the absence of tourists and the cancellation of bulk orders for locally made sandals and slippers due to the COVID-19 pandemic. —CLIFFORD NUÑEZ

Walk-in customers used to be plenty, among them “balikbayan” (returning residents) who bought footwear as “pasalubong” (gifts) for their return abroad.Since the pandemic, at least four business owners had filed a notice of closure with the local government. Fifteen stores reopened when the lockdown was eased but were allowed to operate at 50 percent of their capacity.“There was one [store] that had P1.5 million [worth of] stocks on hand [for export, but was canceled] by the lockdown. Luckily, they found another buyer from Vietnam,” Sulibit said.She said footwear manufacturers did not keep their stocks too long since materials, like synthetic leather or abaca fibers, might break up or grow molds over time.

Loma said manufacturers have since shifted to online selling, “but it will never be the same as before. Orders come in trickles, ‘paisa-isa lang,’ (one by one) and [are] not enough [to cover expenses].”

Sulibit said they created a Facebook page, Liliw’s Footwear, as a centralized display of the town’s products and to keep the industry’s presence in the market.

“But the problem is that footwear is like apparel. It is not considered essential during these times, unlike food. I myself would pay off the utilities first than buy a new pair of slippers,” she said.

Velasco: Uphold term-sharing agreement ‘for God and our country’