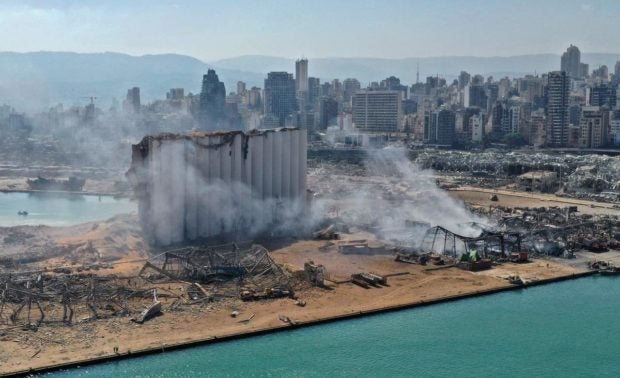 An aerial view shows the massive damage done to Beirut port’s grain silos and the area around it on Wednesday, one day after a mega-blast tore through the harbor in the heart of the Lebanese capital with the force of an earthquake, killing more than 100 people and injuring over 4,000. AFP-Yonhap via The Korea Herald/Asia News Network

SEOUL — The Port of Busan, where some 1,240 tons of ammonium nitrate are stored, is drawing criticism from worried local residents as there is no unified command center to manage the explosive material — the cause of a deadly explosion in Beirut, Lebanon.

According to local sources, the entry, exit, storage and monitoring of the material in question are conducted separately, leaving a loophole in proper management.

Currently, when ships carrying ammonium nitrate enter or leave the port, the Busan Port Authority arranges the schedule. However, it’s the Busan Regional Office of Oceans and Fisheries that decides whether such ships can enter, depart or unload payloads at the port.

Once ships get approval and unload the ammonium nitrate payloads, they are stored and managed by private terminal operators. From thereon, the Busan Metropolitan City Fire Disaster Headquarters conducts periodic checks to check that they are managed safely.

“As of Monday, there are 62 containers of ammonium nitrate sitting at the port. We are fully aware that related laws for the management of ammonium nitrate are scattered and that responsibilities are divided among different entities. We will discuss with related authorities to establish a systemized management system,” a Busan Regional Office of Oceans and Fisheries official said.

Currently, the office isn’t equipped with a real-time monitoring system that can check ammonium nitrate payloads once they are delivered to private terminal operators.

However, Busan Port Terminal, a private company that operates two terminals that store and manage shipments of ammonium nitrate, asserted the material is in safe hands.

“There is a fundamental difference between Beirut and Busan. In Beirut, ammonium nitrate was stored in a warehouse in bulks without proper packaging. The substance here, already packaged safely in accordance with international law, is kept inside steel containers that are a few centimeters thick, resistant to fire and explosion,” a BPT official said.

“Moreover, these containers stay no more than 10 days at the port because terminal operators charge surcharges on hazardous substances.”

Safety checks are conducted on ammonium nitrate at government and ministerial levels every year and season, respectively. Unscheduled checks are done by the fire department.