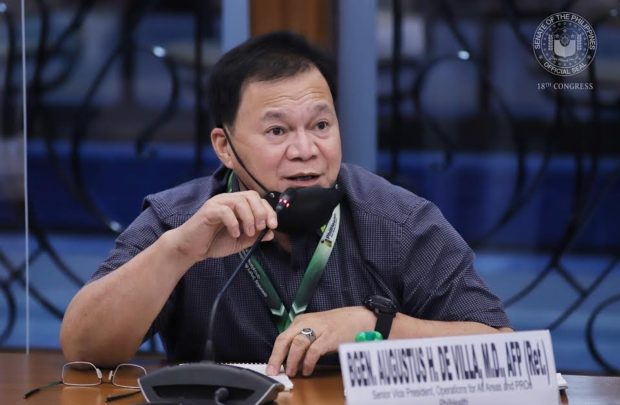 PhilHealth SVP for Operations BGen. (ret.) Augustus De Villa testifying before the Senate Committee of the Whole hearing on August 5, 2020. De Villa recently quit his post and tells the Senate on Tuesday, August 11, 2020, that he did so out of “delicadeza” as PhilHealth is embroiled in a “sad spectacle of alleged anomalies.”  (Joseph Vidal/ Senate PRIB)

MANILA, Philippines — Resigned  Philippine Health Insurance Corp. (PhilHealth) Senior Vice President for Operations Augustus de Villa disclosed to the Senate that he decided to step down from his post out of “delicadeza” amid the “sad spectacle” of alleged anomalies in the agency.

Before this, De Villa said he also resigned from his post to spend time with his family and as a precautionary measure since he is “vulnerable” to the coronavirus infection for being a senior citizen and for having comorbidities, such as high blood pressure.

De Villa said he believes that there is truth to allegations of corruption within the state-run insurance company.

The resigned PhilHealth official said he promised himself that he and fellow former military man, PhilHealth President Ricardo Morales, “will be able to put things right” in the agency when he was appointed in 2019.

“But unfortunately I was wrong as we now have to grapple with the sad spectacle of alleged anomalies being unearthed in these investigations in the Senate and the House of Representatives,” he said.

“It was not a painful decision to break from my colleagues in PhilHealth…My decision is to step aside and work from the vantage point to salvage the honor of the institution, which is PhilHealth,” he added.

As he ended his statement, De Villa held back tears as he expressed hopes that those who are not involved in the alleged corruption in the agency would still be given the chance to serve.