LA PAZ — Bolivia’s government said on Monday it had ordered police and military to protect key installations and the transport of medical oxygen after clashes broke out over protests and roadblocks by opposition supporters demanding a quick election. 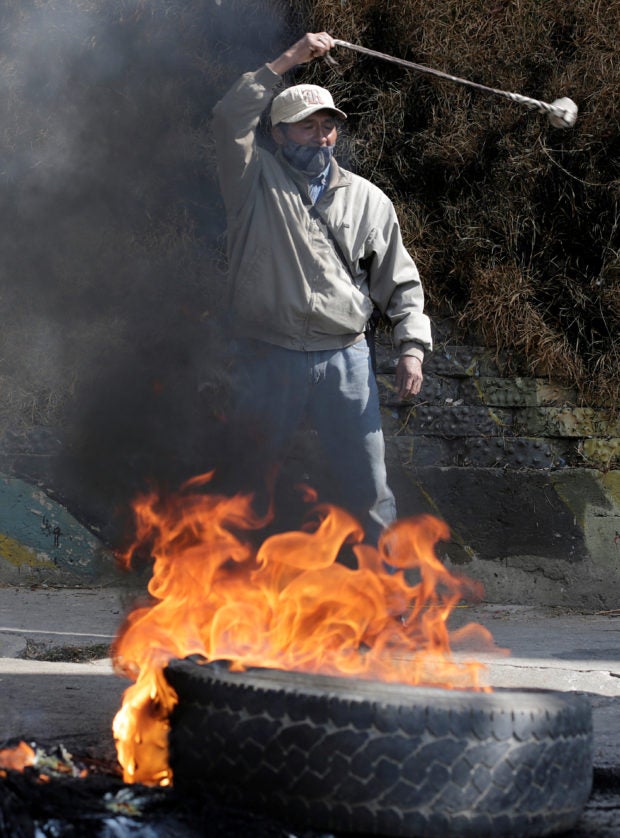 A demonstrator holds a slingshot at the blockade point set up by supporters of unseated former leftist leader Evo Morales, who are demanding quick presidential elections which have been postponed due to the coronavirus disease (COVID-19), in El Alto, on the outskirts of La Paz, August 10, 2020. REUTERS/David Mercado

Tensions are brewing as the South American nation heads for a key presidential election on Oct. 18, which has been delayed due to COVID-19. Supporters of unseated former leftist leader Evo Morales are demanding the vote be held on Sept. 6.

The standoff threatens to convulse the landlocked country and revive memories of last year’s deadly clashes following a disputed election that led to the resignation of Morales, dozens of people being killed and buildings being set on fire.

The election is being fought between Morales’ Movement for Socialism (MAS) party and a fragmented conservative opposition, including interim President Jeanine Anez, who took over in a power vacuum last year promising swift new election.

“It is important to put an end to these mobilizations,” Presidency Minister Yerko Núñez said, blaming “radical” groups allied with MAS who “seek death among Bolivians.”

“From today, the Armed Forces and the police will fulfill the mission of safeguarding public institutions…, safeguarding the provision of oxygen, medical supplies, medicines and health personnel.”

Morales, currently in Argentina, has criticized the interim government, which he accuses of leading a coup, and encouraged mobilizations to protest against the election delay. The protesters, mostly in rural areas, have blocked access to some main cities using stones, rubble and earth.

The Ombudsman’s Office recorded at least three gunshot wounds after clashes during the unblocking of a road in eastern Bolivia, while the health ministry has recorded over 30 deaths due to lack of oxygen as of last week.

Defense Minister Fernando López told reporters that violence needed to be avoided. “We do not want more deaths. COVID-19 is already taking too many,” he said.