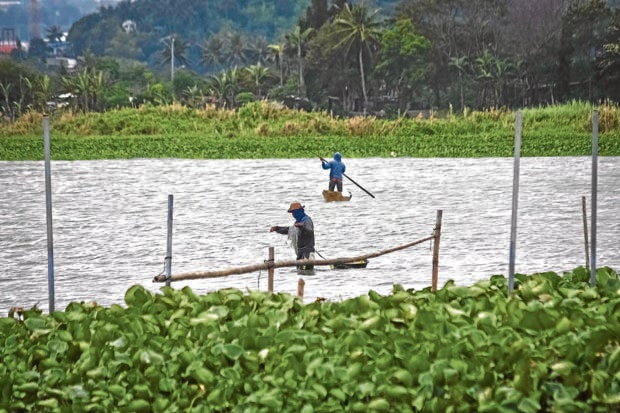 LAKESIDE LIVELIHOOD Laguna de Bay yields small blessings for residents of lakeside communities, like these men in Calamba City in Laguna, who catch fish in the lake’s shallow portion. The protected shoreland of Laguna de Bay, however, is facing threats of encroachment as the value of land continues to increase. —KIMMY BARAOIDAN

A developer, earlier called out by Malacañang for misrepresenting President Rodrigo Duterte’s message as a company endorsement, is facing a string of complaints and investigation by different government agencies over a project that sold cheap parcels of land along the shores of Laguna de Bay in Rizal province.

The Laguna Lake Development Authority (LLDA) on Monday said it filed complaints of grave coercion and violations of Republic Act No. 4850 (the law that created the LLDA) against Torque Village Development Inc. (TVDI), a company based in Cainta, Rizal, which is behind the mixed-use development of 115 hectares of land in Taytay town, also in the same province.

The government property in Sitio Tipayan, Barangay San Juan, falls within the 14,000-ha shoreland, whose sale is not only illegal but also at risk of liquefaction and flooding, according to the LLDA.

The lots are also conveniently located close to C-6 Road, where real estate value suddenly rose after the construction of the thoroughfare between Rizal and Metro Manila.

The charges were filed by the LLDA and the municipal government of Taytay in the Rizal prosecutor’s office on Aug. 4.

According to Jaime Medina, LLDA general manager, a shoreland, also known as buffer zone, is that part of the lake bed along the lakeshore, lying at an elevation of 12.5 meters and below and is alternately submerged or exposed by the normal annual rising and lowering of lake water level.

“Any form of use is strictly prohibited unless sanctioned by the government for public use,” he added. But TVDI’s former vice president, Frederick Berry, in a telephone interview on Monday, said the firm did not intend to sell the lots but rather “distribute” them to 2,000 beneficiaries composed of poor families, policemen and soldiers.

In December 2019, TVDI launched the project, touted as a “Lakeshore Smart City,” featuring street lights and trash cans equipped with security sensors and structures that could self-monitor energy consumption.

Berry, who identifies himself as an advocate of organic farming, said the company wanted to build a modern “model city” where a community could live in affordable housing and sustain its own food production. The LLDA said it received numerous complaints about the company’s collection of P10,000 to P20,000 as membership fees or down payment to reserve a slot in the project.

“It’s just for equity,” said Berry, who claimed to have funded the feasibility studies and project design with P5 million sourced from private groups based in Europe and Singapore.

The project was “lauded” by President Duterte, through a message of support featured in a souvenir program, “for offering informal settlers and indigent families a vibrant, peaceful and productive living space.” But after the LLDA flagged the project, Malacañang, in February, wrote TVDI stating that Mr. Duterte’s message was not meant to endorse it “nor provide any color of authority to [the company] to convey property which [is] otherwise available for disposition.”

“[T]his Office has already barred any presidential message request from you or any group you represent,” Gregorio Deligero, head of the Office of the President’s correspondence office, told TVDI.

LLDA counsel Hazel Garduque said the case was filed to “warn the public” against what she described as a “squatting syndicate,” which the agency learned was planning to resume construction in September. Berry said he had resigned from the company in June after learning that the money collected from the beneficiaries “was not remitted” at all.

He said no construction had been made since due to “internal problems” in the company and an ongoing investigation by the Department of Agrarian Reform.