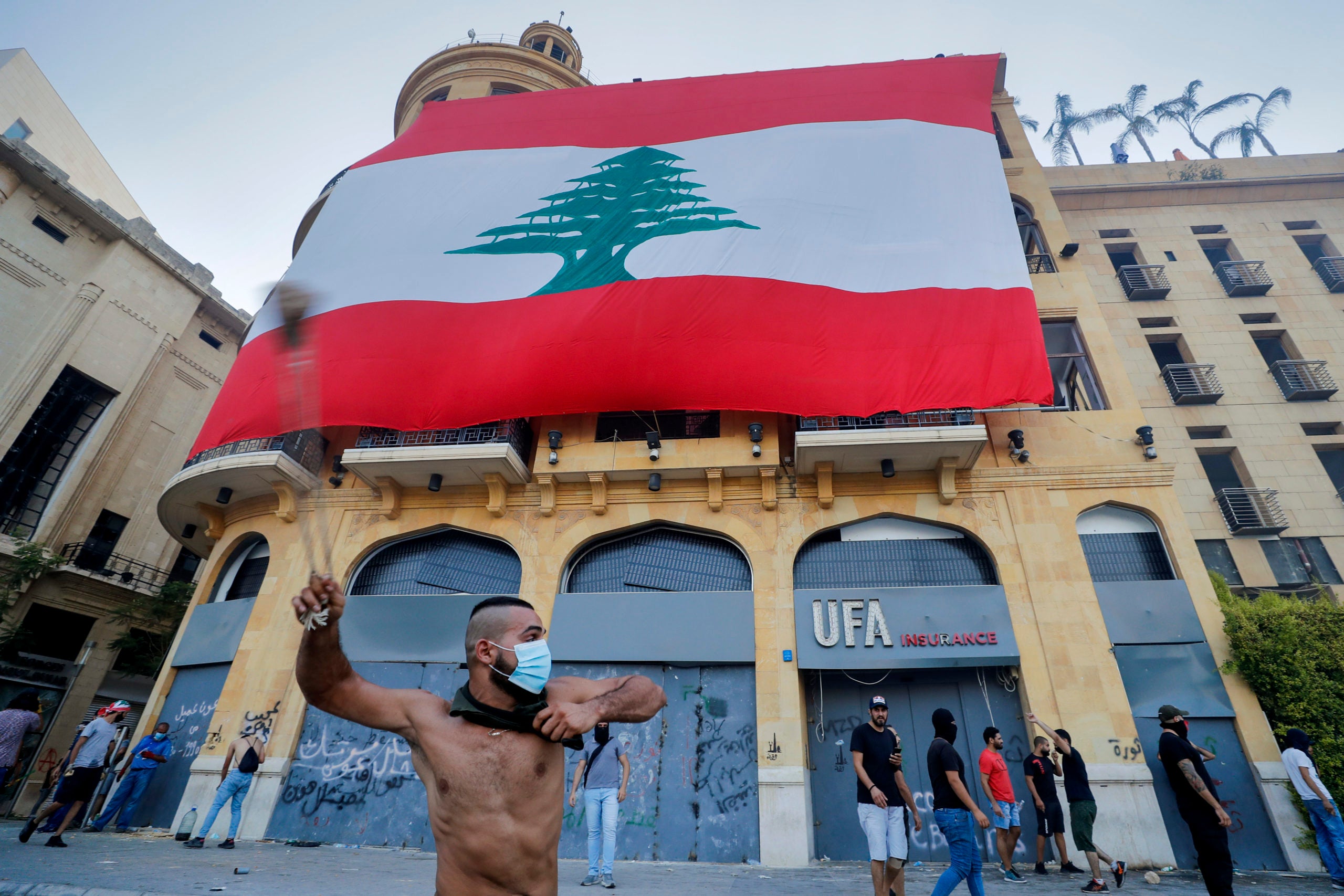 People clash with police during a protest against the political elites and the government after this week’s deadly explosion at Beirut port which devastated large parts of the capital and killed more than 150 people, in Beirut, Lebanon, Saturday, Aug. 8, 2020. (AP Photo/Hassan Ammar)

BEIRUT  — Lebanon’s information minister resigned on Sunday as the country grapples with the aftermath of the devastating blast that ripped through the capital and raised public anger to new levels.

The resignation comes as public anger is mounting against the ruling elite, blamed for the chronic mismanagement and corruption that is believed to be behind the explosion in a Beirut Port warehouse. Hundreds of tons of highly explosive material were stored in the waterfront hangar, and a blast sent a shock wave that killed at least 160 people, wounded nearly 6,000, and defaced the coastline of Beirut — destroying hundreds of buildings.

Manal Abdel-Samad said in her resignation letter that change remained “elusive” and she regrets failing to fulfill the aspirations of the Lebanese people.

“Given the magnitude of the catastrophe caused by the Beirut earthquake that shook the nation and hurt our hearts and minds, and in respect for the martyrs, and the pains of the wounded, missing and displaced, and in response to the public will for change, I resign from the government,” she wrote.

In the country where civil war raged for 15 years, few, if any, have been held accountable for it and most of the warlords remain in power or leading powerful political factions.

On Sunday, France’s Ambassador to Lebanon said his country is taking part in the investigation of the Aug. 4 blast. Bruno Foucher tweeted that 46 officers are operating as part of the judicial investigation. That probe was started by a French prosecutor after a national of France, Jean-Marc Bonfils, was killed in the blast and others injured.

It is “a guarantee of impartiality and speed” in the investigation, Foucher tweeted.

Demonstrators held signs that read “resign or hang.” The protests quickly turned violent when the demonstrators pelted stones at the security forces, who responded with heavy volleys of tear gas and rubber bullets. One police officer was killed and dozens of people were hurt in confrontations that lasted for hours.

Protesters also fanned out around the city, storming a couple of government ministries. They briefly took over the foreign ministry, saying it will be the headquarters of their movement. In the economy and energy ministries, the protesters ransacked offices and seized public documents claiming they would reveal how corruption has permeated successive governments.

Five of the parliament’s 128 members have also announced their resignation since Saturday— including three legislators of the Christian Kataeb party, a member of the Socialist Progressive Party and an independent.

Abdel-Samad’s resignation comes amid reports that another government official — the environment minister — is expected to resign, adding to the challenges facing Prime Minister Hassan Diab.

Diab took over in January and has since been beset by crises.

The government, backed by the powerful militant Hezbollah group and its allies, announced it is defaulting on Lebanon’s sovereign debt and has since been engaged in difficult, internally divisive talks with the International Monetary Fund for assistance.

The coronavirus restrictions deepened the impact of the economic and financial crisis and fueled public anger against the new government. Lebanese have criticized Diab’s government for being unable to tackle the challenges, saying it represents the deep-seated political class that has had a hold of the country’s politics since the end of the civil war in 1990.

Foreign Minister Nassif Hitti resigned even before the blast, citing an absence of “effective will to achieve comprehensive structural reform” and competing leadership.

In a televised speech Saturday evening, Diab said the only solution was to hold early elections.

He called on all political parties to put aside their disagreements and said he was prepared to stay in the post for two months to allow time for politicians to work on structural reforms.

The offer is unlikely to soothe the escalating fury on the street. It is also expected to trigger lengthy discussions over the election law amid calls for introducing changes to the country’s sectarian-based representation system.

The information minister’s resignation comes ahead of an international conference co-hosted by French President Emmanuel Macron and United Nations Secretary-General Antonio Guterres aimed at bringing donors together to supply emergency aid and equipment to Lebanon.

Previous offers of aid have been contingent on carrying out significant government reforms to tackle corruption.