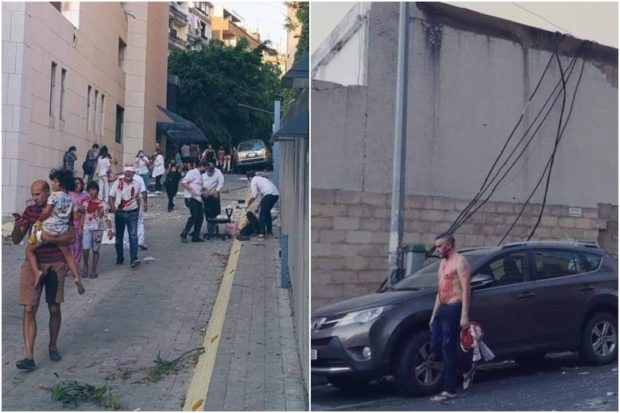 Residents outside Al Roum Hospital in Beirut on Aug 4 after the blast. MAHMOUD ZAHRAUN via The Straits Times/Asia News Network

BEIRUT — It was 6pm on Tuesday (Aug 4) when Mr Georges Jabbour was at the National Evangelical Church of Beirut, helping out at his cousin’s wedding ceremony which was due to start in an hour.

The priest had just arrived at the church, about 2km from the Beirut port, when there was an explosion. It seemed like a localized car bomb.

“We are unfortunately used to car bombs and wars. I first thought it was a car bomb. But when I saw the pink-ish smoke, I knew it was something else,” Mr Jabbour, 35, said.

It was so powerful, the seismological monitors registered it as the equivalent of a magnitude 3.3 earthquake, and tremors were felt in Cyprus, a country 250km away.

By the next day, at least 137 were confirmed killed in Beirut and 4,000 people injured. Many more were left homeless overnight.

“It was like a war zone,” said Mr Mahmoud Marwan Zahraun, 25, an electrical engineer who was at that time in his office in the Raoucheh neighborhood just 3km west of the blast site.

“Dead bodies everywhere and for a few days, the debris remained on the streets. Many of my friends were injured by the flying debris.”

The National Evangelical Church of Beirut, situated in central district, was relatively unscathed. But the priest was injured and rushed to the hospital, and the wedding had to be cancelled.

“Glass shattered behind me but I was considered lucky. My friends were not as lucky. A lot of them live in Gemmayzeh and Mar Mikhael, two neighborhoods right in front of the port and they are homeless now.

“Many of them were injured too,” said Mr Jabbour.

The government has arrested dozens of people and focused its investigation on the 2,750 tonnes of ammonium nitrate stored in the warehouse at the port prior to the explosion.

But conspiracy theories about a nuclear bomb or a military attack blamed on the United States, Israel or even militant group Hezbollah have spread all over Lebanese social media.

Beirut-based tech entrepreneur Sarah Abdallah, 31, said she was at her home 10km from the blast site when she heard what sounded like a warplane flying overhead moments before the blast.

While these claims are unproven – the authorities in Israel and Lebanon have dismissed such suggestions – many Lebanese continue to cast doubt on the official version of events that tragic day.

“You can never rule anything out. I don’t think the truth will ever come out,” said Ms Abdallah.

Her skepticism reflects the deep mistrust many Lebanese have of their government, accumulated over decades of economic mismanagement.

The economy had collapsed in October last year. The Lebanese pound, pegged at 1,500 to the US dollar for decades, lost 80 per cent of its value after the country ran short of dollars to maintain the peg.

The new government, installed in January after a massive protest toppled the previous one, was perceived to have failed to bring about meaningful improvements.

Lockdown measures to control the coronavirus spread dealt a further blow to the economy. 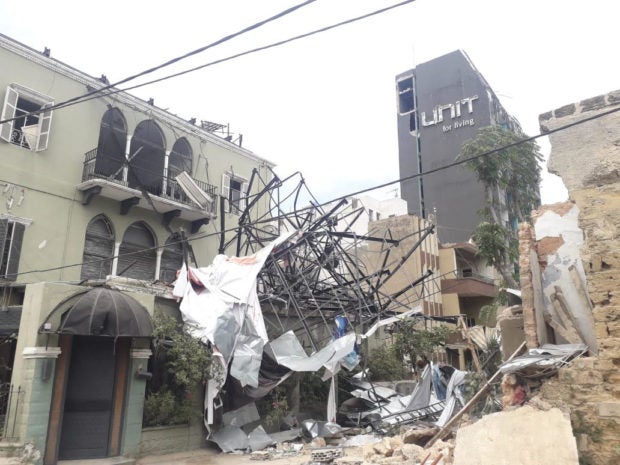 A damaged building in Mar Mikhael, a neighbourhood 2km from the Beirut blast site. GEORGES JABBOUR via The Straits Times/Asia News Network

One in six Lebanese lives in poverty, according to United Nations data. In Beirut, fuel shortages often result in power cuts and blackouts.

Since October, inflation has climbed to more than 50 percent.

Food prices surged 190 percent in May from a year earlier, according to official data cited by Credit Libanais.

The meats were so expensive, the army removed them from meals offered to soldiers, state media reported.

Ms Abdallah is forking out one-third of her income to pay for electricity every month.

“We’re paying US$200-300 a month for power that only comes on one to two hours a day. We have to use an external generator for electricity,” she said.

Lebanon is heavily reliant on imports, especially food supplies. It currently imports more than half of what it consumes, according to official data.

And the country relies on privately-owned mills to ship wheat from Ukraine, Russia and other European countries.

But the explosion destroyed the country’s only large grain silo and disabled a port which handles 60 per cent of Lebanon’s imports.

Even before the disaster, many Lebanese felt they were already deprived of many basic needs.

Controls imposed by Lebanese banks on access to cash last year further irked depositors like Ms Abdallah, who now worries that even her savings would be taken away.

“I’ve worked for more than 10 years in Lebanon and all my savings are gone because our assets are frozen.”

“We have no clean water, essential services like the electricity and Internet services were already disrupted before the explosion.

“People don’t know what to eat and what to drink and yet the government continues to steal from us,” Ms Abdallah said.

“I read about Kuwait sending masks to Lebanon for pandemic relief but where are the masks? So far, I only see them being sold in the pharmacy.”

The financial crisis forced her to shut down a tech start-up that she founded and work as a freelance consultant for overseas-based clients but even that is now in jeopardy.

“Many of my clients are based in the United Arab Emirates. With the Internet disruption, it has become harder for me to work.”

The core of the problem, she said, was not the absence of a solution, but people to solve these crises because “they are all busy abusing their power”.

French President Emmanuel Macron, who arrived in Beirut on Aug 6, told angry crowds that he wanted to lead a global response and would seek a new deal with the political authorities.

He promised to send more medical and other aid to Lebanon, a former French colony, and said: “But what is also needed here is political change. This explosion should be the start of a new era.”

Meanwhile, Lebanese noted that the local government has been slow to act.

People like Mr Jabbour and Mr Mahmoud took it upon themselves to clean up the debris and help those who lost their homes to find a shelter.

“The explosion happened at a wrong time. Our livelihoods were already affected by the political unrest and the financial crisis and people on the streets were already unhappy.

“Now we will suffer even more.”

“I don’t know what will happen tomorrow and the day after. I’ve not returned to my office since the day of the explosion and I don’t know if I will keep my job. For now, I will just help in volunteering as much as I can,” said Mr Mahmoud.

The Lebanese had to endure a civil war from 1975 to 1990, and a series of other conflicts since. But they pride themselves on their resilience.

The Beirut port explosion will once again test them.

“People say we Lebanese rise like a phoenix from the ashes. But the ashes are getting very heavy,” Ms Abdallah said.

“In the past, people were always divided even in their anguish towards the government. I hope that as a result of the explosion, they can finally unite and change things for the better.”