Survivors, rescue workers involved in Kerala plane crash to be tested for COVID-19 after a victim found positive 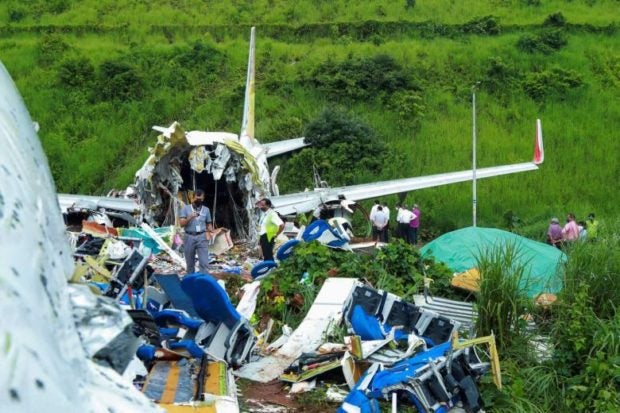 Officials inspecting the wreckage of an Air India Express jet at Calicut International Airport in Karipur, Kerala, on Aug 8, 2020. AFP via The Straits Times/Asia News Network

BANGALORE — All survivors and rescue workers involved in the plane crash in Kerala on Friday (Aug 7) are being tested for Covid-19, as one of the passengers killed tested positive for the virus.

The Air India Express plane, on a repatriation flight from Dubai, overshot the runway while landing at the Calicut International Airport in Kozhikode in heavy rain and crashed into a small gorge, splitting into two.

The flight IX 1344, a Boeing 737 plane operated by Air India’s overseas low-cost unit, was carrying 190 passengers, including 10 infants. It was part of the Vande Bharat Mission of the Indian government, to repatriate citizens stranded abroad during the Covid-19 pandemic. Most passengers were workers in the United Arab Emirates, many of whom have lost their jobs. They had been on waiting lists to return home for weeks.

Nineteen people, including a four-year-old and the pilot and co-pilot, have died. At least 23 others are in critical condition.

Mr Sharafu Pilassery, one of the victims, had posted on Facebook a family picture with his wife and three-year-old daughter in face shields and white protective bodysuits. “Back to home,” he had written, just before the flight took off from Dubai.

Mr Pilassery succumbed to his injuries at Baby Memorial Hospital on Friday night. Officials said his wife is in stable condition, but his daughter is in critical care.

Most of the passengers were people who had lost jobs, had expired Visas, or needed emergency medical treatment. They had been on a waiting list to return home for weeks.

The state government offered 1 million rupees (S$18,300) to the victims’ families and will bear the medical expenses of all survivors.

Much of the rescue work was done by locals. Mr Muhammed Rafi from Koduvally town near the airport said that he had called for help as soon as he heard the crash. “Within one-and-a-half hours, we helped to admit all injured passengers in nearby hospitals,” he said.

State Health Minister K.K. Shailaja said that Covid-19 tests were conducted on the dead before autopsies were carried out.

Kerala Chief Minister Pinarayi Vijayan said that one of those killed in the crash tested positive for Covid-19. All plane crash survivors and rescue workers should thus go into self-quarantine, and will be tested for coronavirus, he added.

India’s worst crash since 2010, it has triggered questions about the safety of the airport’s short runway.

The heavy downpour could have made the plane skid, said a Kozhikode district official in-charge of rescues. Kerala, a southwestern coastal state of India, is seeing torrential rains this week, and landslides have killed 24 people.

The crash has raised concerns in India about other airports with shorter-than-usual runways on an elevation.

The Kozhikode international airport is on a hill and has a 2,860m runway that stops almost at the cliff edge. The last major passenger plane crash in India was in May 2010, in neighboring Mangalore, which also has such a “tabletop” airport. An Air India Express had overshot the tarmac, killing 158

After the Mangalore crash, a safety advisory committee had recommended installing an aircraft decelerating system to prevent flights from exceeding short runways at both the Mangalore and Kozhikode airports. However, government authorities had ignored the suggestion, citing expenses and a reluctance to close the runway for installation.

Captain Mohan Ranganathan, a civil aviation expert who was part of a committee that had inspected the Kozhikode airport, said it was “tailor-made for disaster.” In 2011, he warned that landing “on runway 10 in tailwind conditions in rain are endangering the lives of all on board.”

Directorate General of Civil Aviation chief Arun Kumar, however, told CNN-News18 that “the runway was long enough for safe landing” and “there was poor judgement of pilots while landing”.