30 killed, 6,000 displaced due to weeklong heavy downpours in S. Korea 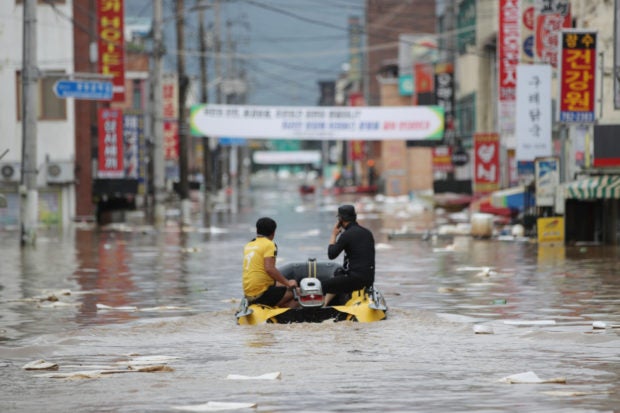 SEOUL — Heavy downpours, landslides and floods in South Korea have killed at least 30 in the past several days, but the death toll may rise further as more than 10 people have gone missing. More heavy rains are forecast in the southern part of the country due to an approaching typhoon.

Torrential rains have wreaked havoc across the country since Aug. 1 amid the prolonged monsoon season.

According to the data by the Central Disaster and Safety Countermeasure Headquarters, the country’s death toll stood at 30 as of Sunday, leaving 12 people missing and eight wounded.

Over the past three days, 13 people have died, two gone missing and one injured nationwide, according to the headquarters.

The death toll did not count the casualties from three capsized vessels at Uiam Dam in Chuncheon, 85 kilometers east of Seoul, which left three dead and three missing on Sunday. It was categorized as a marine accident.

More than 5,900 people from 11 provinces and cities left their homes, and some 4,600 of them remain at temporary shelters following warnings of disasters.

Some 9,300 hectares of farmland were swamped or buried, while 9,500 cases of damage to public and private facilities were reported. Repair work has been completed for 73.2 percent of the damage cases, according to the authorities.

Typhoon Jangmi, the season’s fifth typhoon, is expected to hit the southern region of the Korean Peninsula from Monday, bringing about more rain in the flood-hit areas.

The state weather agency said the tropical storm will probably arrive in waters off Busan, the southern port city, some 325 kilometers southeast of Seoul, around 3 p.m. Monday. It asked the people in the affected areas to be fully prepared for possible flooding or landslides.

The agency said seven railways across the country have been blocked as of Sunday morning, while 10 flights in Gwangju Airport have been canceled.

The heavy rainfall has pummeled the southern part of the country in the past few days.

A total of 612 mm of rain was reported in the county of Damyang in South Jeolla Province during the three-day period, with 533.7 mm in Gwangju and 517.5 mm in Hwasun County.

In a landslide that buried a house in the county of Jangsu, North Jeolla Province, two more people were found dead on Sunday, after two were found to have died the previous day.

A man in his 70s went missing as he was swept away by a strong current in Damyang.

The disaster control center said 3,749 people have been left homeless over the three-day period, most of which are still staying at temporary shelters due the flooding of the Seomjin River in Namwon City, North Jeolla Province, and Gurye and Damyang counties, both located in South Jeolla Province.

Nearly 3,300 cases of property damages were reported over the cited period, including to 2,233 public facilities, while damage was also reported to 287 residences and 1,180 hectares of farmland.

Some roads and bridges were destroyed by the heavy rain, which also caused 65 floods at local streams and 11 landslides. Yonhap