Nagasaki urges nuke ban on 75th anniversary of US A-bombing

TOKYO — The Japanese city of Nagasaki on Sunday marked its 75th anniversary of the U.S. atomic bombing, with the mayor and dwindling survivors urging world leaders including their own to do more for a nuclear weapons ban. 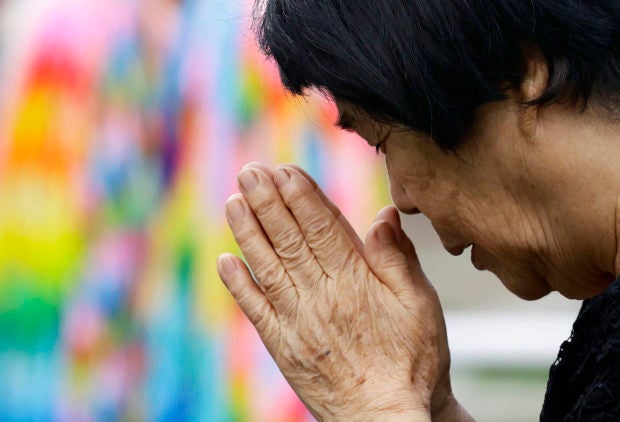 A bereaved family member prays for the victims of U.S. atomic bombing at the Atomic Bomb Hypocenter Park in Nagasaki, southern Japan, Sunday, Aug. 9, 2020. Nagasaki marked the 75th anniversary of the atomic bombing on Sunday. (Kyodo News via AP)

Many survivors developed cancer or other illnesses due to their exposure to radiation and suffered discrimination.

Read Next
PhilHealth financial ‘checkup’, cleansing before gov’t bailout – solon
EDITORS' PICK
Acer Philippines welcomes you to its first flagship store
New Year, New Rediscoveries
Biden says Covid-19 expected to kill ‘well over 600,000’ in US
UP president challenges AFP claim on Reds’ campus infiltration
WHO says fabric facemasks still work against virus variants
Is your company a growth champion? Stand up and be recognized!
MOST READ
NBI files raps vs top execs of 2 tech firms
Ate Vi’s message to those against ABS-CBN’s franchise renewal
Cop, 12 others killed in Maguindanao shootout
OVP spokesman tells Mocha Uson: Don’t drag us into your nonsense
Don't miss out on the latest news and information.