Work to save PH eagles won’t stop for pandemic

MANILA, Philippines — Even before the young Philippine eagle (Pithecophaga jefferyi) soared back to her home on Mt. Apo, hundreds of people were already tuned in to her takeoff.

Most of them were far from the actual jungles of Mindanao. Some were more than 1,000 kilometers away, in the urban jungles of Metro Manila, awaiting the eagle’s flight on their computer or cell phone screens.

The release in late July of the rescued raptor, named “Makilala Hiraya” by her carers, was the first time such a momentous event was broadcast live on Facebook by the Philippine Eagle Foundation (PEF), which works to give the critically endangered species a chance at survival.

With the community quarantine separating people and requiring them to stay home, the livestream offered a rare collective experience to watch the national bird boost that chance. 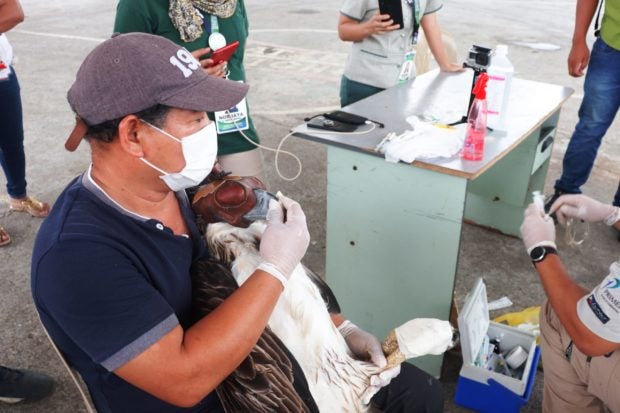 FIT TO FLY HIGH Adriano Oxales, animal keeper of the Philippine Eagle Foundation, holds the Philippine eagle named “Makilala Hiraya” for a standard medical checkup before the bird’s transfer to the Philippine Eagle Center in Davao City on June 8. After she was found healthy and clear of diseases, she was released on July 28, in time for World Nature Conservation Day. —PHOTO COURTESY OF PHILIPPINE EAGLE FOUNDATION

The mission to save the Philippine eagle, one of the rarest eagles in the world, has not stopped despite the COVID-19 pandemic. Under the “new normal,” eagle conservationists are turning to digital tools and the internet to keep at their arduous task.

Prepandemic engagements during eagle releases were focused only on concerned local government officials and indigenous communities living near or in the forest that the eagle considers its home, said PEF executive director Dennis Salvador.

The new coronavirus has changed that. Strict health protocols now limit those who can come together at the site.

But this setback has opened another door—an eagle release as a learning opportunity for a wider audience and a source of inspiration during bleak times.

“With most people at home due to the lockdown, we saw that it was a good opportunity to allow people to take part and see firsthand the work that goes into releasing rescued eagles,” said Jayson Ibañez, the foundation’s director for research and conservation.

Their new approach did not come without technical glitches. After all, forests are not the ideal places to get the strongest internet connection. The result was a tad anticlimactic, as weak signals barred those tuned via Facebook livestream to see the actual moment when Makilala Hiraya left her bird kennel.

Thankfully, the power of social media proved stronger: A subsequent video of the eagle’s actual takeoff has gained over 3,000 likes and has been shared by more than 1,000 people at this writing.

Ibañez said the videos of the national bird, seen as a symbol of rising above adversity, would hopefully help ease the people’s sorrows and fears over the uncertain future wrought by the pandemic.

Digital tools are now playing central roles in actual conservation work given the restrictions on the usual protocols in bringing rescued birds to the Philippine Eagle Center in Davao City.

Since the lockdown in March, the PEF has rescued four Philippine eagles. The number includes Makilala Hiraya, which crash-landed in a grassland in Makilala town, Cotabato province, in June, after being mobbed by a flock of large-billed crows.

Makilala town was only a three-hour drive from Davao City. But it was a different scenario for “Siocon,” which was found 625 km away in Zamboanga del Norte province at the height of the lockdown in April.

With strict travel bans across the country, Ibañez and his team, along with their partners from the Department of Environment and Natural Resources (DENR) and the Department of Agriculture, began remotely rehabilitating Siocon back to health.

“It was the first time for us … We used Messenger video and phone conferencing,” he said.

In over a month, online checkups were done through photos and videos of Siocon that were exchanged by Ibañez’s team and the DENR regional office in the Zamboanga Peninsula, where the eagle stayed. Through the Messenger app, Ibañez sent extensive guides on proper restraint and care for the bird.

Weak Wi-Fi signals sometimes got in the way, but the telemedicine approach paid off. In mid-May, the PEF team made the 19-hour drive to Zamboanga, passing through 15 checkpoints across seven cities and provinces. With a GPS tracker attached, Siocon was finally released back into the wild.

“Preinternet and mobile phones, this would have been impossible,” Ibañez said. 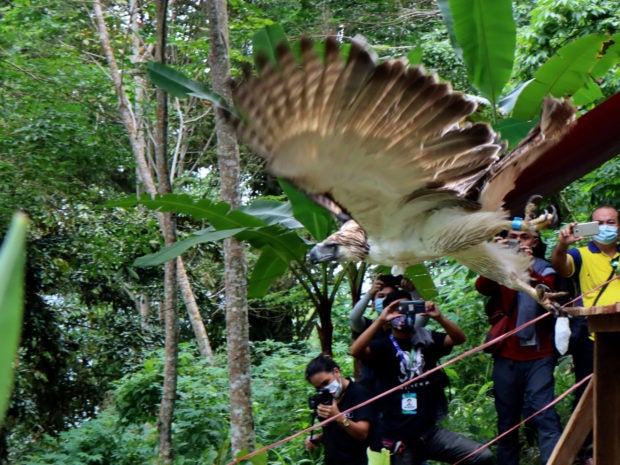 UNCAGED AND ONLINE The release of the rescued Philippine eagle named “Makilala Hiraya” back to the wild last month was broadcast live on social media, a first for the Philippine Eagle Foundation. —PHOTO COURTESY OF GIDEON ZAFRA OF THE MAKILALA INFORMATION AND COMMUNICATIONS OFFICE

Nationwide, only around 400 pairs of Philippine eagles are left, half of them in Mindanao. With the threats of deforestation and hunting, conservationists are working closely with their partners on the ground to ensure the birds’ survival in the succeeding generations.

Among these partners are the indigenous peoples living in ancestral domains where Philippine eagles are found. They serve as front-liners in watching over and protecting the birds of prey.

But their communities have also been ravaged by the coronavirus and the economic slump, leaving many cut off from vital information on the health outbreak as well as most basic goods and government services.

Thus, with laptops, LCD projectors and fervent hope for strong Wi-Fi signals, the PEF and its partners have begun giving online seminars and training in financial literacy and managing small enterprises to indigenous tribes and also migrants in the uplands to help them cope with the changes driven by the public health crisis.

In the next weeks, Ibañez and his team plan to bring livelihood projects and assistance to more communities, including a webinar on how to sew cloth face masks.

With no signs of the pandemic’s end, the PEF has also called on the public for donations so it may continue with its mission of engaging the communities and caring for the 32 eagles still in the center in Davao City.

As the eagle conservationists adapt to the new normal, they hope that the lessons from the pandemic will be carried even after the worst is over.

“If we continue to convert lands and cut down forests, we may face tougher pandemics,” Salvador said. “I think we should do something in terms of policies and practices to protect and secure our forests, not only to benefit our biological resources but also to ensure the future of our people.”

Read Next
‘Chalk allowance’ gets blended with teachers’ new needs
EDITORS' PICK
Gear up and get ready to play with Yamaha Mio Gear
If elected VP, Sara Duterte will push for mandatory military service for all Filipinos
Over 3 Million worth of prizes to be won at Smart Padala’s SENDali Manalo Promo!
Acer starts the year off strong with the Aspire Vero National Geographic Edition
Senate bill seeks to penalize employers requiring employees to work during rest hours
Marcos-era elections: Not what his son signed up for
MOST READ
Vice mayor slams Vico Sotto for turning Pasig into a ‘puro palabas’ city
Jose Manalo’s son Benj pays tribute to late mother: ‘You’re a testimony of God’s love’
‘Sampal sa gobyerno:’ Drilon wants unvaxxed PAO chief barred from working
Bongbong-Sara tandem names 7 candidates in initial senatorial slate
Don't miss out on the latest news and information.