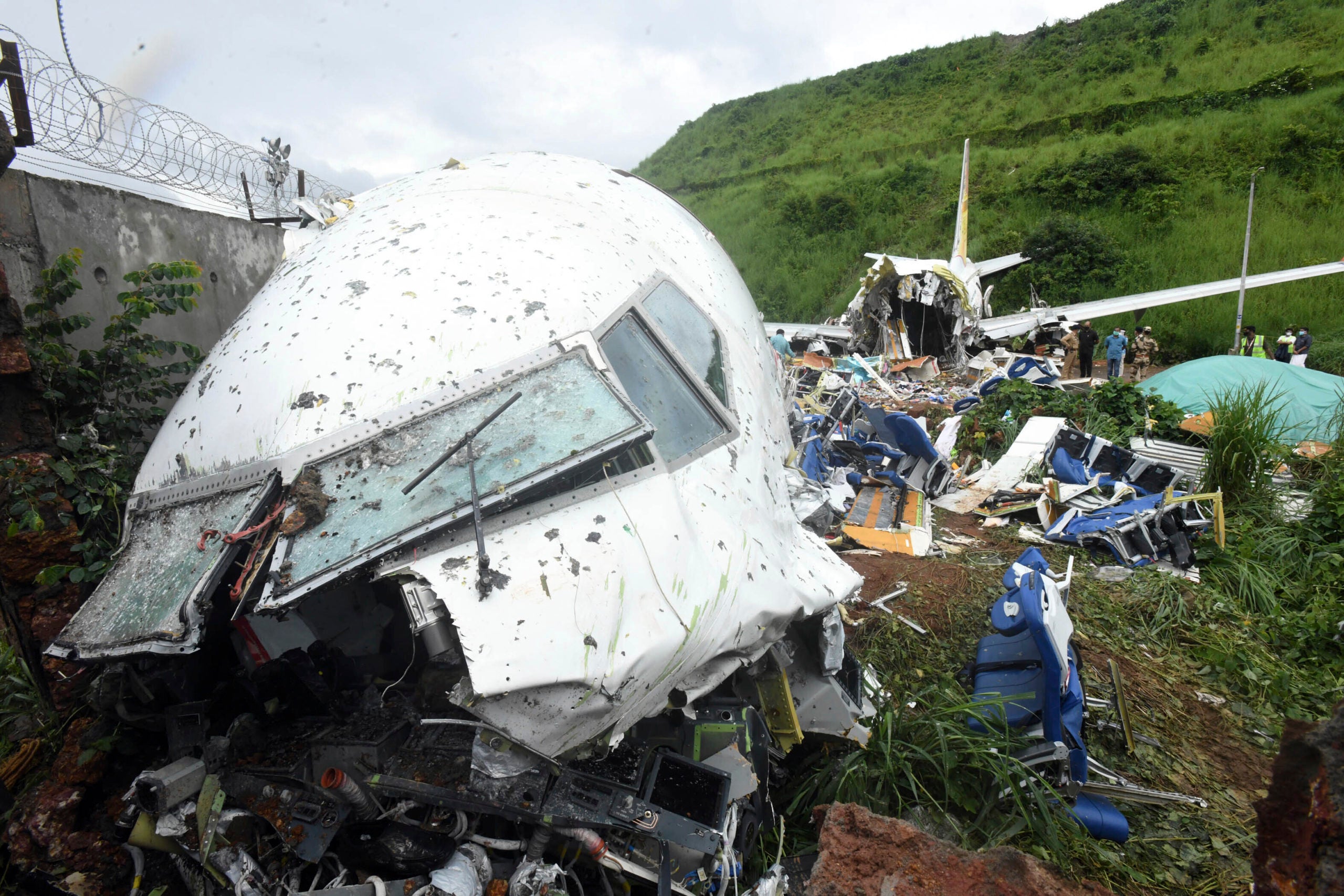 People stand by the debris of the Air India Express flight that skidded off a runway while landing in Kozhikode, Kerala state, India, Saturday, Aug. 8, 2020.  (AP Photo/Shijith Sreedhar)

KOCHI, India — The plane swayed violently as it approached a hilltop runway soaked by monsoon rain, and moments later the special return flight for Indians stranded abroad by the pandemic skidded off, nosedived and cracked in two, leaving 18 dead and more than 120 injured.

Among the injured on Friday night, at least 15 were in critical condition, said Abdul Karim, a senior police officer in southern Kerala state. The dead included both pilots of the Air India Express flight, the airline said in a statement, adding that the four cabin crew were safe.

The 2-year-old Boeing 737-800 flew from Dubai to Kozhikode, also called Calicut, in Kerala.

There were 174 adult passengers, 10 infants, two pilots, and four cabin crew on board.

In a telephone interview from his hospital bed, Renjith Panangad, a plumber who was returning home for the first time in three years after losing his job at a construction company in Dubai, said the plane swayed before the crash and everything went dark.

He said he followed other passengers who crawled their way out of the fuselage through the emergency exit.

“A lot of passengers were bleeding,” said Panangad, who escaped without major injuries. “I still can’t comprehend what happened. As I am trying to recall what happened, my body is shivering.”

He said the pilot made a regular announcement before landing, and moments after the plane hit the runway, it nosedived.

“There was a big noise during the impact and people started screaming,” he said.

As the rain stopped Saturday morning, searchers recovered a flight data recorder as the Aircraft Accident Investigation Bureau started work on the wreckage. Air India Express said its teams also reached Calicut to support and assist families of the victims.

The wreckage of the plane was resting below a flat hilltop, its nose crashed through a wall. The aircraft’s fuselage was split in two and cables dangled from the wreckage and luggage and seats were strewn around.

A similar tragedy was narrowly avoided at the same airport a year ago when an Air India Express flight suffered a tail strike upon landing. None of the 180 passengers on that flight was injured.

Civil Aviation Minister Hardeep S. Puri said in a statement that the flight “overshot the runway in rainy conditions and went down” the slope, breaking into two pieces upon impact.

The runway end safety area meets United Nations international civil aviation requirements, but the U.N. agency recommends a buffer that is 150 meters (492 feet) longer than that at Kozhikode airport, according to Harro Ranter, chief executive of the Aviation Safety Network online database.

The Press Trust of India news agency reported that the country’s aviation regulator had sought an explanation from the director of the Kozhikode airport in 2019 on finding “various critical safety lapses,” which included cracks on the runway, water stagnation, and excessive rubber deposits.

Officials from the aviation regulator said it was too early to tell at this point whether the accident was a result of a technical error or human error.

Dubai-based aviation consultant Mark Martin said annual monsoon conditions appeared to be a factor, though it was too early to be certain of the cause.

“Low visibility, wet runway, low cloud base, all leading to very poor braking action is what looks like led to where we are at the moment with this crash,” Martin said, calling for the European Aviation Safety Agency and the U.S. Federal Aviation Administration to assist with the Indian government’s investigation.

Kerala state Health Minister KK Shailaja asked local residents who joined the rescue effort to go into quarantine as a precautionary measure. The survivors were being tested for the virus, officials said.

The Air India Express flight was part of the Indian government’s special repatriation mission to bring Indian citizens back to the country, officials said. All of the passengers were returning from the Gulf region, authorities said. Regular commercial flights have been halted in India because of the coronavirus outbreak.

The passenger manifest of the flight, a copy of which was seen by the AP, showed that a large number of passengers were stranded tourists and workers reuniting with their families after months away.

Prime Minister Narendra Modi tweeted that he was “pained by the plane accident in Kozhikode,” and that he had spoken to Kerala’s top elected official.

Air India Express is a subsidiary of Air India.

The worst air disaster in India was on Nov. 12, 1996, when a Saudi Arabian Airlines flight collided midair with a Kazakhastan Airlines Flight near Charki Dadri in Haryana state, killing all 349 onboard the two planes.