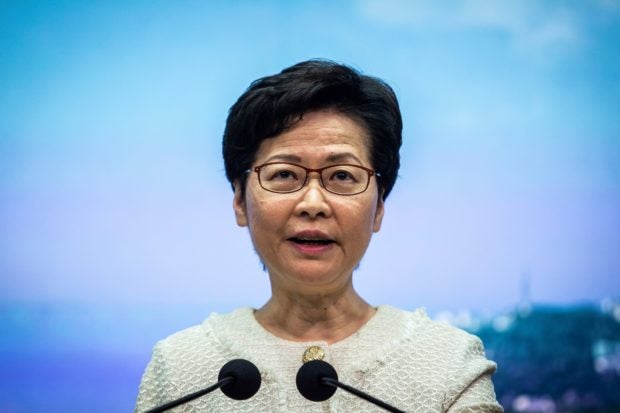 Washington, United States — The United States slapped sanctions Friday on Hong Kong’s leader after effectively forcing Chinese internet giants TikTok and WeChat to end all US operations in a twin diplomatic-commercial offensive set to grow ahead of US elections.

In the toughest US action on Hong Kong since Beijing imposed a security clampdown on the territory, the Treasury Department said it was freezing US assets of Chief Executive Carrie Lam and 10 other senior officials.

The move criminalizes any US financial transactions with the 11 officials, who include Hong Kong’s police commissioner, its security secretary, and China’s top official in the international financial hub.

“Today’s actions send a clear message that the Hong Kong authorities’ actions are unacceptable,” Secretary of State Mike Pompeo said in a statement.

Pompeo said China’s security law – which bans subversion and other perceived offenses in Hong Kong – violated promises made by China before Britain handed back the territory in 1997.

The Treasury Department said Lam “is directly responsible for implementing Beijing’s policies of suppression of freedom and democratic processes.”

Since then, authorities have postponed elections, citing the coronavirus pandemic, and, according to Beijing, issued arrest warrants for six exiled pro-democracy activists.

The US measures come three months ahead of November 3 elections in which Trump, who is behind his rival Joe Biden in the polls, is campaigning hard on an increasingly strident anti-Beijing message.

“We assess that China prefers that President Trump – whom Beijing sees as unpredictable – does not win reelection,” he said in a statement Friday.

As public disapproval has grown for his handling of the COVID-19 crisis ravaging the United States, Trump has pivoted from his previous focus on striking a trade deal with China to blaming the country for the pandemic.

Late Thursday, Trump made good on previous threats against WeChat and TikTok – two apps with major audiences that US officials say pose a national security threat.

In an executive order, Trump gave Americans 45 days to stop doing business with the Chinese platforms, effectively setting a deadline for a potential, under-pressure sale of TikTok to Microsoft.

The move also threw into doubt the American operations of WeChat’s parent firm, Tencent, a powerful player in the video gaming industry and one of the world’s richest companies.

China voiced outrage at the move, which comes as Trump also steps up pressure on the trade and security fronts.

“At the expense of the rights and interests of US users and companies, the US… is carrying out arbitrary political manipulation and suppression,” Chinese foreign ministry spokesman Wang Wenbin said.

The new restrictions sent Tencent shares tanking as much as 10 percent at one point in Hong Kong trade, wiping almost $50 billion off its market capitalization.

Trump’s order claims TikTok – whose kaleidoscopic feeds of short video clips feature everything from hair-dye tutorials to dance routines and jokes about daily life – could be used by China to track the locations of federal employees, build dossiers on people for blackmail and conduct corporate espionage.

TikTok, which has repeatedly denied sharing data with Beijing, said the order was “issued without any due process.”

The app owned by Chinese-based ByteDance vowed to “pursue all remedies available” to seek what it called fair treatment.

WeChat is a messaging, social media, and electronic payment platform and is reported to have more than a billion users, with many preferring it to email.

Daniel Castro, of the Information Technology and Innovation Foundation, said the US actions were likely to be counterproductive.

“There is no security justification for banning an app merely because it is owned by a Chinese company,” Castro said.

“Allegations of security risks should be backed by hard evidence, not unsubstantiated innuendo. American tech companies stand to lose significant global market share if other countries follow a similar standard and block US tech companies from their markets because of concerns about US government surveillance.”

Trump has effectively set a deadline of mid-September for TikTok to be acquired by a US firm or be banned in the United States, leading Microsoft to accelerate its talks to buy it.

The TikTok mobile app has been downloaded about 175 million times in the US and more than a billion times around the world.

The latest US actions follow a protracted battle over Huawei, the Chinese network and smartphone giant accused by the Trump administration of being a tool for espionage.