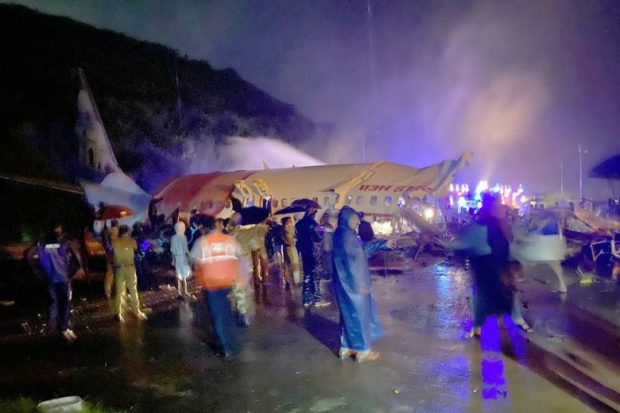 The plane, carrying 191 passengers, crashed after it overshot the runway amid very heavy rainfall. PHOTO: JETFLIGHTPRO/TWITTER via The Straits Times

MALAPPURAM – At least 15 people are said to have died when an Air India Express flight crash-landed and split into two on Friday (Aug 7) night after skidding off a runway at an airport in India’s southern state of Kerala during bad weather.

At least 123 people suffered injuries and 15 were seriously injured, according to reports

The Air India Flight 1344, a Boeing 737, was carrying 190 people when it overshot the tabletop runway and plunged about 10m into a deep gorge at the Calicut International Airport, also known by the names Kozhikode Airport and Karipur Airport.

There was serious damage to the cockpit area, The News Minute reported.

A tabletop runway is one that is located atop a plateau or hill with one or both ends adjacent to a steep slope that drops into a deep gorge.

“Air India Express flight IX 1344 operated by B737 aircraft from Dubai to Calicut overshot runway at Kozhikode at 1941 hours tonight. No fire reported at the time of landing,” Air India Express said in a statement earlier. “There are 174 passengers, 10 infants, two pilots, and five cabin crew onboard the aircraft.”

The civil aviation ministry later revised the figure for the cabin crew to four. 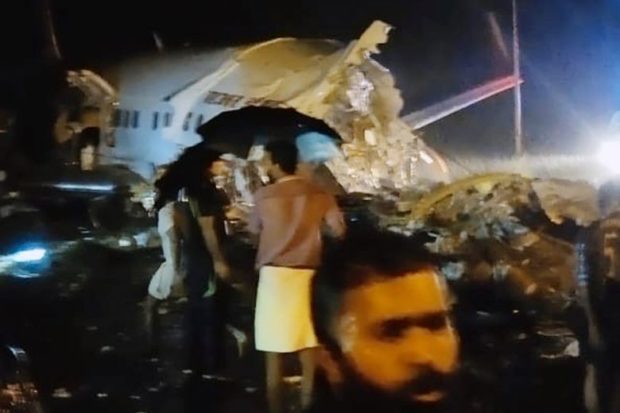 The aircraft split into two. PHOTO: BREAKINGAVNEWS/TWITTER via The Straits Times

Kerala police said at least 100 people have been taken to hospitals, while the search for other survivors continues.

Officials said the shortage of torches and incessant rain were affecting the search and rescue mission, the News18 site reported.

Citing sources, The News Minute said flights heading to the Calicut airport are usually diverted to nearby airports during bad weather as it is a tabletop airport, but Flight 1344 made a landing.

The area in the coastal city of Kozhikode was battered by heavy rain when the incident took place.

The Directorate General of Civil Aviation (DGCA), India’s top aviation body, has ordered a detailed inquiry into the matter.

Praying for everyone safety 🙏 pic.twitter.com/IpNKiqx0yY

According to a playback on flight-tracking website FlightRadar24, the aircraft circled the airport several times, Bloomberg reported.

Kerala’s chief minister Pinarayi Vijayan tweeted: “Have instructed Police and Fire Force to take urgent action in the wake of the plane crash at the Kozhikode International airport (CCJ) in Karipur. Have also directed the officials to make necessary arrangements for rescue and medical support.”

Prime Minister Narendra Modi offered his condolences on Twitter: “Pained by the plane accident in Kozhikode. My thoughts are with those who lost their loved ones. May the injured recover at the earliest. Spoke to Kerala CM @vijayanpinarayi Ji regarding the situation. Authorities are at the spot, providing all assistance to the affected.”

India has not thrown open international flight operations due to the coronavirus pandemic but has been operating multiple repatriation flights, and has established air bubbles with a handful of countries, including the United States and Germany.

Some 950,000 Indians have returned home on the repatriation flights under the Vande Bharat Mission, the Ministry of External Affairs had said on Thursday.

Kerala has been hammered by torrential rains which triggered a landslide in the early hours of Friday in Idukki district, killing at least 15 tea garden workers. Rescue workers were mobilized to search for more than 50 people who were thought to be trapped under soil and debris.

The last fatal plane crash in India was in 2010 when an Air India Express Boeing plane overshot the runway and burst into flames, killing 158 people.

That was the first fatal crash of a passenger aircraft in India in a decade.