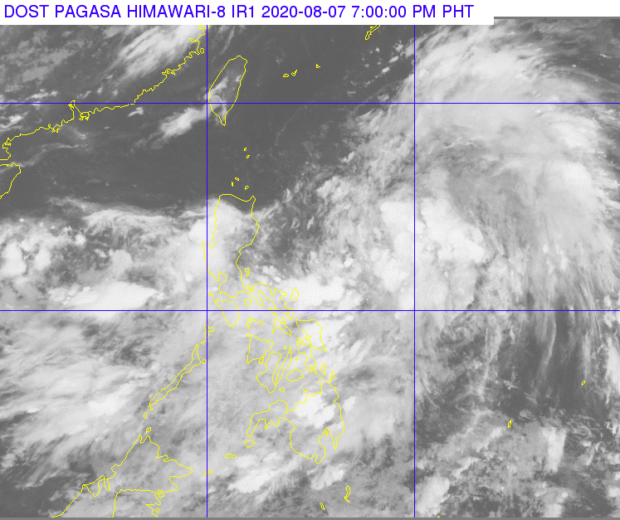 MANILA, Philippines — The low pressure area (LPA) east of Luzon may intensify into a tropical depression in the next 36 hours, the Philippine Atmospheric, Geophysical and Astronomical Services Administration (Pagasa) said on Friday.

Pagasa’s 5 p.m. weather forecast showed that the LPA, last spotted 455 kilometers east of Baler, Aurora, is currently pulling cloud bands from the west toward a huge part of the country, while intensifying the southwest monsoon or Habagat.

If the LPA progresses into a storm, it would be named “Enteng,” the fifth tropical cyclone to enter the country this year.

Despite the possibility that the LPA turns into a tropical depression, it is not expected to make landfall as it would continue moving northward, straying away from the Luzon landmass.

However, it would still intensify the monsoon in the coming days, which will translate to more cloudy skies and rainfall.

Weather on Saturday will cloudy, with almost continuous rainfall which may vary from light to moderate and sometimes heavy, due to the intensified southwest monsoon.

Temperatures in various parts of Luzon are seen to fall because of the monsoon rains, ranging from 23 to 29 degrees Celsius in Metro Manila, 21 to 27 degrees in Tagaytay, 24 to 29 degrees in Puerto Princesa and Legazpi, and 17 to 25 degrees in Baguio.

The same could be said for Visayas and Mindanao, as temperatures play around 25 to 30 degrees Celsius in Tacloban, 24 to 31 degrees in Cebu, 25 to 31 degrees in Iloilo and Davao, and 24 to 32 degrees in Zamboanga and Cagayan de Oro.

A flash flood and rainfall-induced landslide warning has been raised over the country as rains affect most parts of the archipelago.

No gale warning has been raised as of now, but sea condition in the country’s eastern coastlines and in Palawan’s western seas would range from moderate to rough, still, because of an effect of the LPA.  The rest, meanwhile, would experience moderate seas.