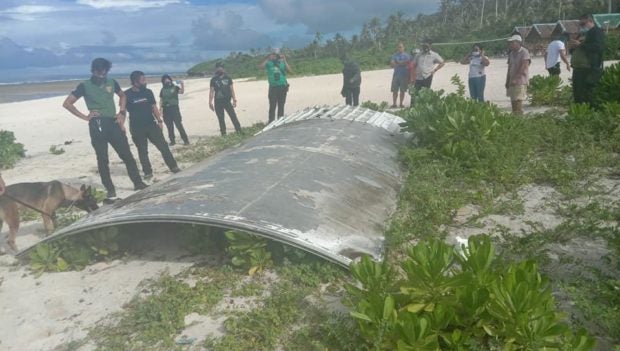 A chunk of metal believed to be from a commercial airplane was found on a beach in Mercedes towns, Eastern Samar. (Photo: Juvimar Lira)

TACLOBAN CITY – Another chunk of metal believed to be from a commercial airplane was found on a beach in Mercedes towns, Eastern Samar Wednesday, August 5.

Juvimar Lira, a resident of Barangay Anuron in Mercedes, said the debris was seen in the area five days ago by some local fishermen.

“When I saw them, they were trying to tinker with the debris, probably for profit. I told them not to touch it and instead report it to authorities,” the 33-year-old businessman said.

Lira said the item should be turned over to authorities for them to investigate where the debris came from.

On Thursday, August 6, local policemen, together with personnel from the Philippine Drug Enforcement Agency, and the Civil Aviation Authority of the Philippines (CAAP), came to the area to inspect the debris.

The CAAP regional office based in the city has yet to issue a statement on the matter.

Lira said the debris was heavy as it took about 10 men to flip it over. He estimated the debris to be around over 100 kilograms in weight and 3 x 4 meters in width.

Some Chinese or Japanese characters were seen on it, he added.

Last July 27, a similar piece of debris was found in the waters off Barangay Taytay in Guiuan town, reports reaching the regional headquarters of the Philippine National Police said.

Nicanor Gagarin, a resident of the village, found the debris floating.