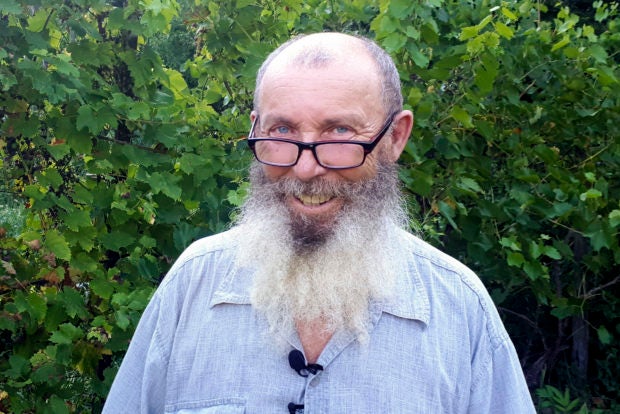 Boris Prokoshev, a sea captain poses for a photo after his interview with the Associated Press outside Sochi, Russia, Thursday, Aug. 6, 2020. When Boris Prokoshev, a sea captain spending his retirement years in a southern Russia village, woke up and found an email saying a ship he once commanded had carried the ammonium nitrate that devastatingly exploded in Beirut, he was astonished. The 2,750 tons of ammonium nitrate that blew up in Beirut’s port on Tuesday wasn’t supposed to be in Lebanon at all. It was bound from the Black Sea for Mozambique, but made an unscheduled detour to Beirut and never left there. (AP Photo/Kirill Lemekh)

MOSCOW — When Boris Prokoshev, a former sea captain spending his retirement years in a Russian village, woke up and found an email saying a ship he once commanded had carried the ammonium nitrate that blew up swathes of Beirut, he was astonished.

“I didn’t understand anything,” he told The Associated Press on Thursday from Verkhnee Buu, 1300 kilometers (800 miles) south of Moscow.

The email was from a journalist, he said, and titled with the name of the MV Rhosus, which he had captained on a voyage that he was never paid for.

“I opened my inbox and saw a letter about the Rhosus; I thought maybe they were sending me money, my salary,” he said.

The 2,750 tons of ammonium nitrate that blew up in Beirut’s port on Tuesday — killing 135 people, injuring more than 5,000 and causing widespread destruction — wasn’t supposed to have been in Lebanon at all. When the Rhosus set sail from the Georgian Black Sea port of Batumi, it was bound for the Mozambican port of Beira.

But it made an unscheduled detour to Beirut as the Russian shipowner was struggling with debts and hoped to earn some extra cash in Lebanon.

Igor Grechushkin, a Russian businessman residing in Cyprus, bought the cargo ship in 2012 from Cypriot businessman Charalambos Manoli. Grechushkin has been questioned by police on request of Interpol’s Lebanon office, said Cypriot police spokesman Christos Andreou, but he has not been detained.

Prokoshev, now 70, said he joined the ship in Turkey in 2013, after the previous crew quit over unpaid wages. Grechushkin, who resides in Cyprus, was paid $1 million to transport the dangerous cargo from Georgia to Mozambique, the former captain said.

The chemicals were to be delivered to Fábrica de Explosivos de Moçambique, a company majority-owned by the Portuguese explosives company Moura Silva e Filhos.

Importing ammonium nitrate is common in Mozambique, either to make fertilizer or for use as explosives in quarries and coal pits.

The ship made a stop in Beirut to try to earn extra money by taking on several pieces of heavy machinery. But that additional cargo proved too heavy for the Rhosus and the crew refused to take it on. The Rhosus was soon impounded by the Lebanese authorities for failing to pay port fees, and never left the port again.

Prokoshev and three other crew members were forced to remain on board because of immigration restrictions. The former captain said they were stuck on the ship for 11 months, with food and other supplies running low. He said Grechushkin abandoned them without paying the wages or the debt he owed to the port.

He said the Beirut port supplied them with food out of pity.

At some point, he sold some of the fuel and used the cash to hire lawyers, who got the crew released on compassionate grounds in 2014. The application to the court emphasized “the imminent danger the crew was facing given the ‘dangerous’ nature of the cargo,” the lawyers wrote in a 2015 article published by shiparrested.com, a website providing information on ship arrests and releases.

The cargo was transferred to a port warehouse only after the crew disembarked and headed back to Ukraine in 2014, Prokoshev said. It remained there ever since – until it detonated on Tuesday.

According to the captain, the ship sank several years after they left. It had a hole in the hull, and the crew, while on it, had to regularly pump water out to keep it afloat. But Charalambos Manoli, the Cypriot businessman who owned the ship before Grechushkin bought it, claims the vessel remained docked in Beirut and was destroyed in the blast on Tuesday; he says he saw the wreckage in the photos of the destroyed port.

The blast has raised outrage in Lebanon against authorities who allowed the dangerous substance to be stored for years. Prokoshev sympathizes with them.

“It’s very bad that people died; they had nothing to do with it. And I realized that it’s the government of Lebanon that brought about this situation,” he said.