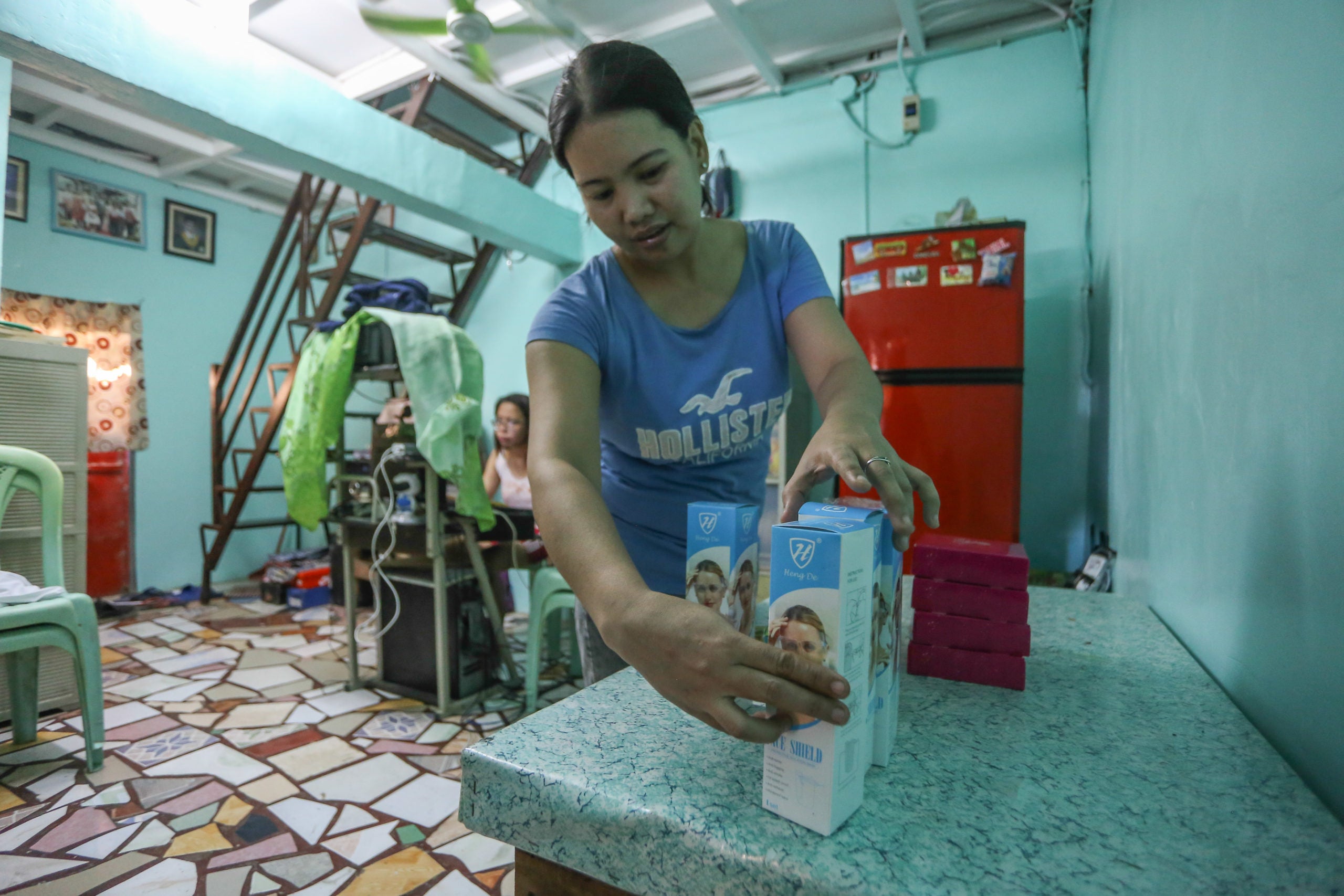 ANY TAKERS? Losing her job as a school canteen helper, 39-year-old Ailyn Austria (above) tries her luck in a Facebook barter community and offers face shields in exchange for a smartphone that her son can use once his online classes start. PHOTO BY EARVIN PERIAS

The Covid-19 pandemic has deprived many Filipino parents of stable income and driven them to the edge.

Now they are pushed to hustle for the perceived new “necessity” in their children’s schooling and are taking to Facebook to offer certain goods in exchange for gadgets to be used in distance learning.

Ironically, the Department of Education (DepEd) says these gadgets are “not required.”

Single parent Ailyn Austria tried her luck in the group “Laguna Barter Community” and offered a flatiron, three towels, and a blanket for an Android phone that her son can use when he enters the eighth grade.

Austria, 39, lost her job as a helper in a school canteen. She has resorted to online selling and also opened a “sari-sari” store.

She said she had been trying to make extra money so she could buy her son “even the cheapest cell phone” for online classes. Tough luck: No one was interested in the stuff she tried to trade in the barter group.

Austria chose modular learning in the enrollment survey for her son, who goes to a public high school. “I picked modular because we do not have the device for online classes. But I’m still trying to get him a gadget because not all lessons are provided in the module. It will aid in his visual learning as well,” she said.

But according to Education Undersecretary Alain Pascua, parents are not obliged to buy gadgets because they have a choice of learning modalities that will best suit their resources.

“If that barter trade is true and the exchange of items for devices is happening, it’s very unfortunate because it is not required to have one,” Pascua said.

“Online Barter Pilipinas,” a public Facebook group with 59,515 members as of Aug. 1, registered in June-July around 50 posts related to the barter of items for gadgets to be used in online classes. Other Facebook groups in Metro Manila cities and the provinces of Bulacan, Pampanga, and Laguna also showed a distinct trend in the barter for technologies, particularly Android phones and laptops.

Rhea Dalisay, who maintains an online “ukay-ukay” business, tried to trade some of the used clothing she is selling in exchange for gadgets for her son Stephen and her daughter Sophia, an incoming Grade 10 student.

It’s “a mix of modular and online classes” for Stephen, who has autism. “We will get the modules from the school and the discussions will happen online,” said Dalisay, 43.

The phone she has is incapable of operating the required Zoom app so she plans to borrow another phone from her relatives, she said.

The items offered by other parents also intending to acquire gadgets for their children’s use in distance learning were quite original: Santiago Pillogo, three roosters which he got from a neighbor, and Ashley Gibertas, her own washing machine.

Both of them weren’t able to make a deal. Gibertas ended up selling the washing machine for P500 because her family ran out of money.

In June, the DepEd issued its Order No. 12 laying out the learning delivery modalities—modular, online, TV- or radio-based—to be adopted by schools based on the COVID-19 restrictions in their locality.

“During the enrollment, parents are asked what resources are accessible for them. When that accessibility is defined, then we tell them which learning modality is best for their child,” Undersecretary Pascua said. “But we never told them to buy gadgets.”

The seeming “confusion” and “panic” of parents who resort to online barter transactions for their children’s schooling resulted from their understanding of the information presented to them, said Jerome Buenviaje, dean of the University of the Philippines College of Education (UPCEd).

“Parents are panicking because, of course, they only want the best for their kids and they go through such methods because it’s how they understand things,” Buenviaje said, adding it was now incumbent on the school leadership to disseminate information that would allay the stakeholders’ fears.

According to Buenviaje, many school leaders also do not know what’s happening, so when they present the information, “it’s hilaw” (raw). “Instead of bringing clarity, it brings confusion, thereby pushing [parents] to engage in such activities without certainty,” he said.

Buenviaje disputed the notion that one learning modality is better than another. “We cannot claim, for example, that face-to-face is better than online because there is no guarantee that the instructor can teach effectively in face-to-face classes. The quality of education depends on the quality of information presented and the handling of the modality,” he said.

The preparation of materials is also a determining factor in the effectiveness of a modality: For example, print-based modules need the validation of experts and practitioners.

“It is important to have clear guidelines and policies so parents would not be confused by the learning delivery mode and the idea that one approach is superior to the other,” Buenviaje said.

Buenviaje cited a student in his doctorate class, a school principal in Caloocan City, who made good use of social media and created a Facebook page and YouTube channel that specifically addresses school-related concerns.

He said the division level, with the help of local governments, could use that strategy and other means like flyers explicitly stating that gadgets were not required. He also said community radio in remote places could peg a time slot for education information campaigns.

“Work within what you have. And whatever the plan and policies are, it is crucial to convey these in the simplest terminologies that everyone can understand,” he said.

At a recent webinar “The ABC of Redesigning the Learning Environment,” organized by the UPCEd, Buenviaje stressed the importance of “calibration” and a feedback mechanism so that after two to three weeks of distance learning, necessary adjustments could be made.

“When the required adjustments are done within the first month of operation, then we can say that we are becoming more ready [for the opening of classes] because we are learning from our experience,” he said.