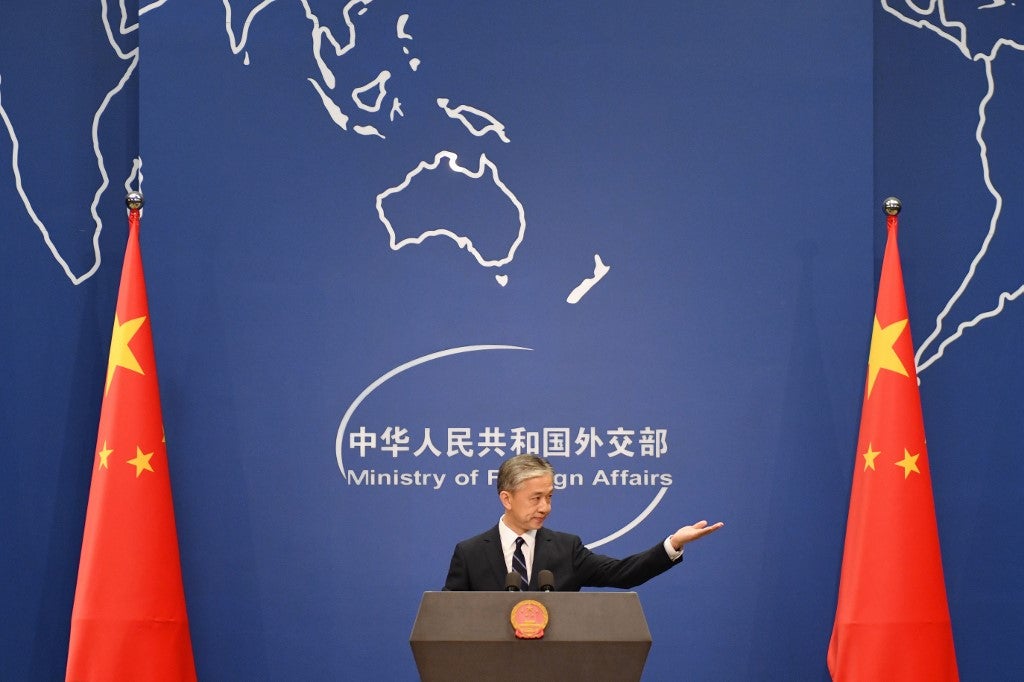 Chinese Foreign Ministry spokesman Wang Wenbin takes a question during the daily Foreign Ministry briefing in Beijing on July 24, 2020. – China on July 24 ordered the US consulate in the southwestern city of Chengdu to close in retaliation for one of its missions in the United States being shuttered, capping a furious week of Cold War-style diplomacy. (Photo by GREG BAKER / AFP)

BEIJING/TAIPEI–China on Thursday threatened to take countermeasures over a trip to Taiwan by U.S. Secretary of Health and Human Services Alex Azar, as the Chinese-claimed island geared up for its highest-level U.S. official visit in four decades.

The visit, which begins on Sunday, adds to tensions between Beijing and Washington over everything from trade and human rights to the novel coronavirus pandemic. China calls Taiwan the most sensitive and important issue in its bilateral ties with the United States.

Chinese Foreign Ministry spokesman Wang Wenbin told a daily briefing in Beijing that any attempt to deny or challenge the “one China” principle, which states that Taiwan is part of China, would end in failure.

While he gave no details, China last month said it would impose sanctions on Lockheed Martin for involvement in U.S. arms sales to Taiwan.

Taiwan has batted away China’s criticism, saying Beijing has no right to comment.

Washington broke off official ties with Taipei in 1979 in favor of Beijing. The Trump administration has made strengthening its support for the democratic island a priority and boosted arms sales.

Azar, who is scheduled to meet President Tsai Ing-wen, is coming to strengthen economic and public health cooperation with Taiwan, and support Taiwan’s international role in fighting the pandemic.

Taiwan is locked out of most global agencies, such as the World Health Organization, due to the objections of China, which views the island as a Chinese province that is not entitled to any of the rights that statehood confers.

Taiwan Centres for Disease Control Deputy Director-General Chuang Jen-hsiang said Azar and members of the U.S. delegation would be tested for coronavirus before leaving for Taiwan, and again upon entry at the airport.

Only if they are negative will they be allowed in.

“They must wear masks at all times,” Chuang said.

“There are rules on where they can go,” he added, saying that Taiwan’s often-crowded night markets would not be on the list for private visits.

The members of the U.S. delegation will also have to maintain social distancing when meeting government officials, Chuang said, adding they would use dedicated elevators “to avoid any risks”.

Taiwan has won praise for its steps to control the coronavirus, including strict border quarantine controls and the widespread wearing of masks, which have won broad public support.

It has reported 477 cases of the coronavirus and seven deaths. Most cases have been imported, and only a small number of people remain in hospital or isolation.

The United States has had more coronavirus cases and deaths than any other country, and the wearing of masks has become a heated political issue, with some people objecting to what they see as an infringement of personal freedom.

‘I have tears!’ Gordon emotional as he opposed freeport zones in CREATE bill